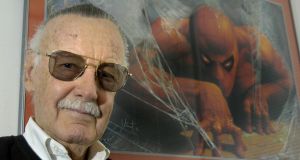 Stan Lee in 2005. His unwavering energy often suggested that he possessed superpowers himself

If Stan Lee revolutionised the comic book world in the 1960s, which he did, he left as big a stamp – maybe bigger – on the even wider pop culture landscape of today.

And that is to say nothing of the Hulk, the X-Men, Thor and other film and television juggernauts that have stirred the popular imagination and made many people very rich.

If all that entertainment product can be traced to one person, it would be Stan Lee, who died in Los Angeles on Monday aged 95. From a cluttered office on Madison Avenue in Manhattan in the 1960s, he helped conjure a line-up of pulp-fiction heroes that has come to define much of popular culture in the early 21st century.

Lee was a central player in the creation of those characters and more, all properties of Marvel Comics. Indeed, he was for many the embodiment of Marvel, if not comic books in general, overseeing the company’s emergence as an international media behemoth. A writer, editor, publisher, Hollywood executive and tireless promoter (of Marvel and of himself), he played a critical role in what comics fans call the medium’s silver age.

Many believe that Marvel, under his leadership and infused with his colourful voice, crystallised that era, one of exploding sales, increasingly complex characters and stories, and growing cultural legitimacy for the medium.

Under Lee, Marvel transformed the comic book world by imbuing its characters with the self-doubts and neuroses of average people, as well an awareness of trends and social causes and, often, a sense of humour.

In humanising his heroes, giving them character flaws and insecurities that belied their supernatural strengths, Lee tried “to make them real flesh-and-blood characters with personality”, he told the Washington Post in 1992.

“That’s what any story should have, but comics didn’t have until that point,” he said. “They were all cardboard figures.”

Though Lee was often criticised for his role in denying rights and royalties to his artistic collaborators, his involvement in the conception of many of Marvel’s best-known characters is indisputable.

He was born Stanley Martin Lieber on December 28th, 1922, in Manhattan, the older of two sons born to Jack Lieber, an occasionally employed dress cutter, and Celia (Solomon) Lieber, both immigrants from Romania. The family moved to the Bronx.

He graduated at 17 from DeWitt Clinton High School in the Bronx and aspired to be a writer of serious literature. He was set on the path to becoming a different kind of writer when, after a few false starts at other jobs, he was hired at Timely Publications, a company owned by Martin Goodman, a relative who had made his name in pulp magazines and was entering the comics field.

Lee was initially paid $8 a week as an office go-for. Eventually he was writing and editing stories, many in the superhero genre.

At Timely he worked with artist Jack Kirby (1917-94), who, with a writing partner, Joe Simon, had created the hit character Captain America, and who would eventually play a vital role in Lee’s career. When Simon and Kirby, Timely’s hottest stars, were lured away by a rival company, Lee was appointed chief editor.

As a writer, Lee could be startlingly prolific. “Almost everything I’ve ever written I could finish at one sitting,” he once said. “I’m a fast writer. Maybe not the best, but the fastest.”

Lee used several pseudonyms to give the impression that Marvel had a large stable of writers; the name that stuck was simply his first name split in two. (In the 1970s, he legally changed Lieber to Lee.)

During the second World War, Lee wrote training manuals stateside in the Army Signal Corps while moonlighting as a comics writer. In 1947, he married Joan Boocock, a former model who had moved to New York from her native England. His daughter Joan Celia Lee, who is known as JC, was born in 1950; another daughter, Jan, died three days after birth in 1953. Lee’s wife died in 2017.

In addition to his daughter, he is survived by his younger brother, Larry Lieber, who drew the “Amazing Spider-Man” syndicated newspaper strip for years.

Reaching a career impasse in his 30s, he was encouraged by his wife to write the comics he wanted to, not just what was considered marketable. And Goodman, his boss, spurred by the popularity of a rebooted Flash (and later Green Lantern) at DC, wanted him to revisit superheroes.

Lee took Goodman up on his suggestion, but he carried its implications much further.

In 1961, Lee and Kirby – whom Lee had brought back years before to the company, now known as Marvel – produced the first issue of The Fantastic Four, about a superpowered team with humanising dimensions: nonsecret identities, internal squabbles and, in the orange-rock-skinned Thing, self-torment. It was a hit.

A timid high school intellectual who gained his powers when bitten by a radioactive spider, Spider-Man was prone to soul-searching, leavened with wisecracks – a key to the character’s lasting popularity across multiple entertainment platforms, including movies and a Broadway musical.

Lee was often faulted for not adequately acknowledging the contributions of his illustrators, especially Kirby. Spider-Man became Marvel’s best-known property, but Ditko, its co-creator, quit Marvel in bitterness in 1966. Kirby, who visually designed countless characters, left in 1969.

Many comic fans believe that Kirby was wrongly deprived of royalties and original artwork in his lifetime, and for years the Kirby estate sought to acquire rights to characters that Kirby and Lee had created together. Kirby’s heirs were long rebuffed in court on the grounds that he had done “work for hire” – in other words, that he had essentially sold his art without expecting royalties.

In September 2014, Marvel and the Kirby estate reached a settlement. Lee and Kirby now both receive credit on numerous screen productions based on their work.

Lee moved to Los Angeles in 1980 to develop Marvel properties, but most of his attempts at live-action television and movies were disappointing. The series The Incredible Hulk, seen on CBS from 1978 to 1982, was an exception.

In 2001, Lee started POW! Entertainment, but he received almost no income from Marvel movies and TV series until he won a court fight with Marvel Enterprises in 2005, leading to an undisclosed settlement costing Marvel $10 million.

Lee’s unwavering energy suggested that he possessed superpowers himself. (In his 90s he had a Twitter account, @TheRealStanlee.) And the National Endowment for the Arts acknowledged as much when it awarded him a National Medal of Arts in 2008. But he was frustrated, like all humans, by mortality.