My first thoughts on Dublin: Are we really in a developed country?

New to the Parish: HaiYing Huang arrived from China in 2002 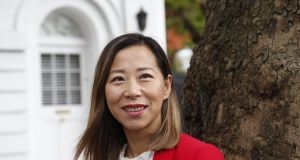 HaiYing Huang was a teenager when her mother left the family home in the small town of Dongfu in northeastern China and moved to South Korea for work. Without today’s advanced technology, months often passed before Huang could speak to her mother over the phone.

“That time was quite tough but they were seeking better opportunities for the family. I was generally happy but every family has their own struggles. I remember the first time I heard her voice on the phone I was literally screaming with excitement.”

When she was a child, and before her parents moved abroad, Huang’s father worked in a mine and her mother ran a hair salon. She recalls her mother often speaking nostalgically of her studies at university before China’s cultural revolution forced her to drop out. “I think that was one of her biggest regrets but she’s still done a lot in her life. She worked exceptionally hard and I inherited that from her. Because Mam and Dad both moved abroad for work going away for me actually felt quite natural. It wasn’t that daunting. I always dreamed big and was quite ambitious.”

Huang was 24 years old when she arrived in Ireland in September 2002. She had recently completed a degree in international trade and began considering studying in Ireland after she ran into a neighbour who had moved to Dublin the year before. “To be honest, geography is not my strength and at first I was like where’s Ireland? I did have doubts because it was such a small country but she told me the people were friendly and she’d had no negative experiences.”

Despite her friend’s optimism, Huang felt deeply apprehensive as her plane landed in Dublin Airport a few months later. “I had huge expectations and remember looking out the window and asking myself: ‘are we really going to a developed country?’ I went to university in Dalian which has big skyscrapers and is like a little New York. Dublin was so small.”

These initial hesitations quickly disappeared as Huang settled into her new home. “I remember my first long walk in September. The weather was beautiful and I was going up Grafton Street to St Stephen’s Green. Everyone seemed so relaxed and the park was like a little oasis in the city. That’s what I like about Ireland to this day; the low-rise buildings, that people say hello to each other, that when you’re served a coffee you say thank you. Those little things really matter.”

Huang had relied on a loan from her parents to pay for the flights to Dublin and was desperate to pay them back as quickly as possible. “We’re not a wealthy family and the cost was probably everything my mum had. I had this huge sense of responsibility that I needed to pay them back so that’s what I did. My first job was in a restaurant, I had to start somewhere.”

After completing her English language course and working for a few years, Huang enrolled at the Dublin Business School where she studied a degree in accounting and financing. In 2009, she successfully applied for a position as a book-keeper at the Communications Clinic public relations firm in Dublin. She later met an Irish man named Greg and in 2015 the couple had a baby girl they called Naoise. “Her Chinese name is Anran; An means peace and harmony. I relied heavily on Greg in terms of an Irish name but thankfully he picked a really beautiful one.”

Three years on, Huang often worries how she’ll explain the family’s Chinese heritage as her daughter grows older. “What keeps me awake at night is how I am going to answer if one day she asks me ‘Mummy, why do I look different?’. I guess there’s no uniform answer to that question. I’ve talked to a lot of my friends – some are immigrant families, others are immigrants married to an Irish person – but there’s no one answer to fit all. Each individual looks at the world through their own lens.”

Huang plans to regularly speak to her daughter about the family’s connections to China and her grandparents’ Korean roots as well as bringing her on trips to China and Korea. She’s planning to make the first of these trips next year when she visits her mother in Seoul. “I’ll leave her to explore these connections and draw her own conclusions. I can show her influences but I can’t force these ideas on her.”

She has also bought a number of children’s books in Mandarin which she keeps by her daughter’s bedside. “I find it quite challenging speaking English eight hours a day at work and then switching back to Chinese at the end of the day. But I’m trying to be more disciplined and read to her in Chinese. She finds the language fascinating when I read to her.”

Huang recently had to make an unexpected trip home when her father died in July after nearly a decade of illness. She says support from Greg’s family has been a huge help during this difficult time. “I’m still quite numb as to what happened and coming to terms with it. I felt really sorry for my dad at the end, he was very unwell and it was tough on him that we were so far away. Even though my brother is in China he was a six-hour flight away. Now that my dad’s gone I’m thinking for the first time, what are we going to do when mam gets older? Would she be happy in Ireland? When my dad passed away it brought us closer together despite the distance. We’re trying now to arrange to meet up more often.”

After more than 16 years in the country, Huang says she feels more Irish than Chinese. However, she still holds on to a connection with China. “Every time I go home there’s a small voice in the back of my head that reminds me this is where I come from. Growing up I always wanted to go abroad and it makes me wonder if Naoise will want to go to China when she’s older. But for the foreseeable future this is my home.”

A lasagne with a difference: swap aubergine layers for pasta sheets
10