Ross O’Carroll-Kelly: ‘Our bogey group should be lactose-intolerant Border-county cyclists’ 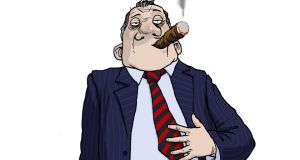 ‘Merrion Analytics can feed polling data into a computer and come up with profiles of marginalised people that it’s perfectly okay to dislike.’

The third Wednesday of November is what my old man calls Golfmas. It’s a day of the year when me, him and Ronan – three generations of the O’Carroll-Kelly family – have our annual day out in Portmornock. We play 18 holes of golf while my old man sucks on his hipflask, shouts random things in Latin and makes increasingly sexist jokes about women golfers, women drivers, women bank tellers, and just women generally, with the occasional, “Of course, you can’t even joke about things like that these days”, before going on to joke about them loads more.

This year, though, he’s not his usual chirpy self. I can tell from the moment his driver lifts his clubs out of the boot of the Kompressor for him that something is definitely wrong. I’d ask what it is, except – honestly? – I don’t actually care. Whatever it is, he’ll hopefully get over it. But then, as we’re about to tee off on the difficult third, Ronan makes the mistake of asking him.

Which is an invitation for my old man to share, of course.

“I’ve got a lot on my mind,” he tries to go. “Weighty matters of state, exclamation mark.”

I’m like, “Oh, well. We won’t stick our noses in. Here, tell Ronan your famous story about the woman in the bank who accidentally gave you a draft for €33,000 that should have been for someone else!”

Ronan looks me and shakes his head.

“Yes, I can Ro – but I’m caught somewhere between indifference and actively not giving a fock. You should let him tell you that story, though. He got the poor woman sacked.”

My son, who’s actually kind – something I hoped he’d grow out of – goes, “What is it, Cheerlie? What’s bottering you?”

The old man’s like, “There are plans afoot, young Ronan. Dastardly dealings happening in the shadows. One of my own friends is planning to betray me. Omnis homo mendax. Virgil said that. Although, equally, it might have been Cicero. ”

I throw my eyes skyward.

He helps the old man over to a bench a few yords away.

“Letting women play through,” the old man goes. “God, I mustn’t be myself, eh, Ross?”

The old man sits down and takes a deep drink.

“It’s Eduard, Ronan. A man I’ve been friends with for nigh on 50 years. A man I invited into the party and made the New Republic candidate for Dublin Mid-West. Nervi et artus sapientiae sunt, non temere credere.”

Ronan’s there, “What’s he arthur doing on you, Cheerlie?”

The old man stares at the women teeing off. He’s so upset, he can’t even bring himself to comment on their swings.

“He’s been talking to Peter Casey, ” he goes. “Sounding him out about replacing me as the leader of New Republic.”

“A snake in the grass, Ronan. A scheming traitor. Have you ever heard of anything so underhanded?”

“Oh, I’ve been tapping the chap’s phone for months now.”

That shocks even Ronan. And he’s been around a few corners in his short life.

“Are you seerdious?” he goes. “Is that not illegal Cheerlie?”

He’s there, “No more illegal than reading someone else’s letters, I’d imagine. Yes, Hennessy arranged the whole thing. Trust but see in whom you are trusting. Fide sed cui vide – eh, Kicker?”

I’m like, “Any more Latin out of you and I’m taking that hipflask off you.”

“I’m sorry. It’s just I’m still in shock, that’s all. I should have seen it coming – of course I should! Peter Casey’s been casting around for a political party to join for weeks now. He tried Fianna Fáil. There’s been talk of Renua. I knew how much some of our chaps admired him. I should have sensed the mood in the room at our recent policy think-in.”

“Picking on the Travellers,” he goes. “It was absolutely inspired. It’s the kind of thing I would have come up with myself except I stopped relying on my instincts. You see, a while ago, Hennessy and I retained the services of a company called Merrion Analytics. Oh, the work they do is very impressive. They can feed polling data into a computer and come up with profiles of marginalised people that it’s perfectly okay to dislike. We were going to use the information to play on the prejudices of the electorate in certain closely contested constituencies in the next election. They suggested our bogey group should be lactose-intolerant cyclists from the southern Border counties.”

I laugh. He’s a knob. Always was. Always will be.

He goes, “Well, think about it Kicker. They’re tight with money and they’re careful with what they say; they have no respect for traffic lights or the rules of the road, and they talk about the fact that they can’t drink milk like it’s some kind of achievement. Oh, we were planning to hit them hard. Issue the Garda traffic division with tasers, power to seize their assets, and so forth. Then Peter Casey steps forward, utters the word ‘Travellers’, and suddenly he’s got 20 per cent of the electorate on his side.”

Ronan goes, “But what does it mean?”