Jennifer O’Connell: ‘Priced out of Dublin? Consider Down the Country’

We walk to school, pubs, restaurants. The sea is 10 minutes away. What’s not to like? 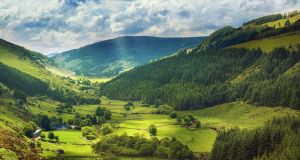 Ask someone from outside Dublin what they’d do to improve their part of the world, and the answers, I suspect, would be things Dubliners take for granted

There’s a special kind of look you get. A tilt of the head. A slightly furrowed brow. Oh, I’m very sorry to hear that, they say. Do you have to go to Dublin often?

Here, in the vast, amorphous territory that spreads from Donegal to Waterford and is known to Dubliners as Down the Country or, more gratingly still, as Rural Ireland – even though most of us gaze out the window these days at Chevrolets, not Charolais – never setting foot in Dublin is a badge of honour.

I haven’t been to Dublin in 11 years, they’ll proclaim. Except to fly out of the place. It is a uniquely Irish boast, like taking to Twitter on a Friday night to announce that you’re not watching The Late Late Show.

Despising Dublin would demand too much effort. It’s more that we don’t look on it with the pride, envy or even interest to which the capital seems to feel entitled

Recently, when The Irish Times ran a series of articles on ways to improve Dublin, Trevor White wrote that we should start by loving it. “The capital is divided from the rest of the country – which despises Dublin.”

The divide is real, but it’s not that the rest of the country despises our capital city. Despising it would demand too much effort. It’s more that we don’t look on it with the pride, envy or even interest to which Dublin seems to feel entitled.

White is right that, as in many other places, the rest of the country feels, at best, ambivalent about its capital city. Admittedly there’s not much recent analysis of this, but a survey in 2010 found that three out of four Irish people felt no emotional connection to Dublin. But you don’t need surveys to bear out what most of us understand instinctively.

I have a foot in both camps. I lived in Dublin, more than happily, for 20 years. I loved the damp, bustling, claustrophobia of the city; the icy relief of walks on Dún Laoghaire pier; the anachronism of deer grazing in the middle of the capital. I have a Dublin-born husband, two Dublin-born children. After about a decade, I started telling people I was from Dublin, because it was easier. Though it never seemed easier when I was home, which was – and is again now – Waterford.

When I lived in Dublin, nobody ever asked me why. Now that I don’t, I find myself constantly having to explain. It’s not that Dubliners are appalled by my family’s decision to ship out; they’re baffled. So I launch into it. We walk to school, to after-school activities, to pubs, restaurants, the theatre, friends’ houses. The sea is 10 minutes away. The mountains 20. They still look puzzled. We could afford to buy a house here, I say at last, and you can see their expression change as though you’ve finally started talking a language they understand. Priced out of Dublin? Consider Down the Country.

Writing about Brexit in this newspaper recently, Robert Shrimsley said “too many Brits fail to grasp that former colonies do not look back to the empire with unalloyed affection”, and it struck me that Dublin is blighted by similar delusions. If, as Shrimsley says, Brits have distorted notions about their relationship with the rest of the world, Dubs have a blinkered view of their relationship with the rest of Ireland.

It’s in the language. The lazily dismissive “down the countrys”, the “middle Irelands” and the “rural Irelands”, even when it is Cork or Galway being spoken about. The phrase “the Greater Dublin Area” is useful from a planning point of view, but it reduces Meath, Kildare and Wicklow to places to sleep when you can’t afford to sleep in Dublin.

It’s in the way Dublin only seems to notice the rest of the country when some angry culchie (step forward, Peter Casey) breaks rank and starts making outrageous statements that resonate with a larger number of voters outside the capital than in it. It’s in the way Dublin’s infrastructure problems are a constant subject of national debate, when there’s little discussion of the fact a motorway joining Cork and Limerick is still a decade away, rural broadband is retreating, and many other places are waiting for the recovery to start, let alone keep going.

Ask someone from outside Dublin what they’d do to improve their part of the world and the answers, I suspect, would be things Dubliners take for granted. We’d like the internet, please. More jobs where we are. Better public transport to the places where the jobs are. Night buses. Motorways to somewhere other than Dublin. A fighting chance that, should we have a heart attack after 6pm, we might just make it to the hospital before we die.

Irish conductor the first woman to lead orchestra at Oscars
10