Why do car dealers charge bank-manager fees to service your vehicle? 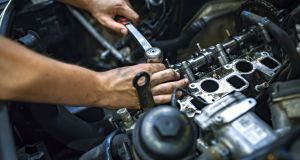 The Competition and Consumer Protection Commission says when getting a car service to make sure you get a “quote” and not just an “estimate”, which is simply a guess at the cost of the work

If you were able to invoice €125 per hour, you’d be pretty happy. Assuming you work a 38-hour week, and take two paid weeks off every year for your holidays, you’d be looking at gross earnings of €247,000 – a level at which you’d be up amongst the hedge fund managers and maybe some of the senior bankers of this land.

That’s not what we’re talking about here, though. We’re talking about the people who service your car. Now we’re not suggesting for a moment that your average car mechanic is earning merchant-banker money every year. Far from it.

Actually, according to research from job-finding website Indeed, the average hourly wage paid to a motor mechanic in Ireland is €20 per hour, which works out at €39,520 gross per year (assuming, again, a 38-hour working week, and two-week’s paid holiday). While not bad that’s the kind of money that, given Ireland’s and especially Dublin’s sky-high cost of living, won’t go very far.

So where’s the other €100 per hour going? Well, for a start, €100 per hour is very much at the upper end. A €125 per hour charge for mechanic labour was the highest price we were quoted during a brief bit of secret shopping. The lowest was €80 per hour, which seems like a far more reasonable – if still pretty pricey – amount.

One would assume that the reasons behind high labour charges would be due to overhead costs., where the highest cost would presumably be either ground rent or the mortgage costs of buying the land upon which the dealership sits.

Which makes our findings odd, because while that highest cost for labour was indeed from a Dublin-based dealer (where’d you expect land, rent, and general overheads to be at their highest), Cork-based dealers were also asking north of €100 in many cases. And, speaking as a Corkman, land isn’t as expensive in the Real Capital as it is in the, ahem, real capital.

And there is no sign that dealers are making supernormal profits.

So what gives? How come car dealers at the top end are charging bank-manager cash for a bit of spanner-twirling?

One senior motor industry insider, who manages the after-sales work for a major brand but who asked not to be identified in this article, was rather robust in his defence of the hourly rates.

“We think nothing of paying a hairdresser on average €25 for a 10-minute haircut, resulting in earnings over an hour in excess of €150. Yet we question €100 an hour for a technician to maintain our second most expensive purchase of our life, and one that carries our loved ones, safely day in, day out? The fundamental start point is recognising and acknowledging the skills of a technician, and the pathway through which these skills are developed and deployed.

“From a starting point of embarking on a three-to-four year apprenticeship, following on with continual technical certification hurdles and progressing with advanced learning on new technology such as electrification and fuel cell derivatives, you would wonder is even €100 too cheap?

“On top of that, franchised dealers provide fantastic customer facilities and services, many of which are ‘free of charge’ such as courtesy cars, collection and delivery, video health reports and vehicle sanitisation or valeting, all of which fall under the umbrella of the labour rate.”

In spite of the apparent high-value for an hour of labour from a mechanic or technician, the fact is that the motor trade in Ireland is currently, according to our insider, suffering a shortage of such staff.

“There is a huge shortage of technicians in Ireland. It is an industry problem and one that the Society of the Irish Motor Industry is trying to address and attract people into the industry. Times have changed from the image of a guy with a spanner covered in oil; our technicians are now highly qualified people using laptops and diagnostic tools to diagnose and repair increasingly technical vehicles.”

There is also no sign that dealers are making fat profit margins these days. An analysis of the most recent accounts for four of Ireland’s most successful dealer groups showed that the best was generating an operating margin of 2.9 per cent, another 1.7 per cent, while the other two were both struggling to break even.

And the future isn’t exactly secure for dealerships, with the sales operations challenged by moves by car makers to sell directly online. Meanwhile the move to electric is going to hit the workshop.

The simple truth is that electric cars are mechanically simpler than cars with petrol or diesel engines, and require far less servicing and maintenance as a result. Some speculate that servicing revenue for electric cars could be as low as one-third of those for combustion engined vehicles.

There are fears – well-founded fears – within the motor trade that the advent of a mass uptake of electric cars will trigger significant job losses within dealerships and garages.

When your car needs nothing more than a battery diagnostic check and some new downloaded software every year, what will there be for your average mechanic to do?

So what does that all mean for consumers? According to the Competition and Consumer Protection Commission (CCPC), which told us that: “In terms of price regulation, generally in Ireland prices are not regulated. This ensures that competition law works in the interest of consumers by requiring businesses to act independently and compete with each other when setting prices.

“A competitive market, in which businesses are free to set their own prices, has many benefits, and we encourage consumers to use the variety of prices to their advantage by carrying out some research and comparing different competitors’ prices.

“In terms of transparency, consumer protection law requires traders to provide consumers with all material information, including the complete price, before they make a purchase, and do not mislead consumers in the information they provide.

The CCPC advice is clear: ask for info before you get work done. “Specifically on what information we would provide to consumers who need to get a service or repair on their car, ask for a detailed, written quotation for the work before getting any work done.

“Make sure you get a ‘quote’ and not just an ‘estimate’, which is simply a guess at the cost of the work – it could end up costing you much more once the work is done. You can refer to a written quotation later in case of any dispute. Any work needed in addition to what was agreed by you must not be carried out without your permission.”

But if prices are broadly similar across the board (and they are) then shopping around – which is the gist of the CPCC’s advice here – is only going to help so much, especially if you’re keen to keep that main-dealer stamp in the service record.

The final piece of advice comes from Conor Faughnan, the AA’s director of consumer affairs, who advised The Irish Times that: “The labour rate in workshops varies in different areas and also by brand of vehicle, with around €140 per hour being the top rate for exotic brands. The labour rate generally varies from €60 to €100 across the country.

“AA would accept that some garages might be incurring extra cost because of Covid protocols, but generally consumers should be reluctant to pay more than those rates unless there is a particular reason. You should ask the garage to explain them.”