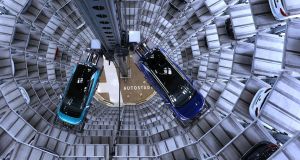 Volkswagen is lifting the lid, ever so slightly, of its future electric car plans. Project Trinity is VW’s next-generation of electric car technology, similar to the MEB platform that currently underpins the all-electric ID.3 and ID.4, but cheaper to build, able to support a greater range of vehicles, and crucially - from VW’s point of view - able to undertake more of the driving for you.

Project Trinity is distantly related to Audi’s Project Artemis, in that both are focused as much on the software that controls the car, and that communicates with you the driver (or is owner, even user, now a better word?) and other road users.

“Trinity is going to be a time machine,” said VW brand boss Dr Ralf Brandstatter. “Trinity gives people time, and takes away the stress. So, after a long motorway drive for example, they are relaxed when they arrive at their destination. You’re being driven. You’re being chauffeured, in fact.

“You switch on the system when you enter the motorway, and then the system will take over, and let you know when you need to leave the motorway. During that time in between you can communicate with work, or relax, even play with your children. It’s quality time, truly, and Trinity will make that available by 2030, for many people not just for a select few. Trinity is about launching new technologies in large volumes for the mainstream market.”

That’s a dramatic statement from VW, and one fraught with difficulty. Other car makers - notably Volvo and Tesla - have suffered embarrassing climb-downs from predictions of the arrival of truly useful autonomous driving technology.

Giving Project Trinity a 2030 target of this kind of useable robotic driving is, in one sense, making a rod for VW’s back, not least because Brandstatter said that initially, the cars based on Trinity will come with ‘Level 2’ robotic driving, which is about where we are now with most cars that feature radar-guided cruise control and lane-keeping steering. A rapid ramp-up to ‘Level 4’ autonomy, which would allow hands-off and eyes-off driving for long stretches, is being promised, though.

Of course, Trinity is equally about electrification, and the flat-floored platform will represent a major move forward from the current MEB platform, which is pretty well cutting-edge at the moment.

Trinity, says VW, will make charging its batteries much more like refuelling a petrol car - suggesting that Volkswagen’s recent breakthroughs in ultra-rapid charging solid-state batteries is bearing some production-ready fruit.

The platform is also promised to be ‘lightweight’ - although nothing even close to precise weights nor comparative weights to the MEB platform are being talked about yet. Again, solid-state batteries, which are lighter and more compact for a given power output than current lithium-ion batteries, could be critical to such weight savings.

VW is also talking about Trinity’s potential to reduce the cost of a new electric car, allowing VW to expand its EV range downward in price, into the Polo-sized category. “This is our project with Trinity, to use it at large volumes and to have economies of scale. It’s also the responsibility of Trinity. The hardware will be largely unified.” A price tag of €25,000 (in European terms) is being spoken of.

VW isn’t quite committing, as has rival (and occasional development partner) Ford to becoming fully-electric by 2030, but Brandstatter says that at least 70 per cent of VW’s European sales will be fully-electric by then. In North America and China, the level will be closer to 50 per cent by that date.

“We’ve developed a very good basis for the future” said Brandstatter. “Volkswagen will accelerate in digital and electro-mobility. I’m looking forward to turning this vision into a reality for the VW brand.”

Volkswagen is promising over-the-air software updates every 12 weeks for its new ID cars, similar to what smartphone owners experience, where new features are regularly added and options can be added long after the purchase of the car.

Laying out its updated strategy, the car giant said the new system will fall under its ID. Digital project, which will start from this summer. “These will enable the vehicle to remain up to date throughout its life cycle and become better and better with new functions. A fully networked fleet of over 500,000 vehicles is expected to be on the road in just two years’ time, through which Volkswagen will be able to transmit direct customer feedback to new functions.”

Volkswagen aims to generate additional revenue over the service life of a vehicle through charging and energy services, through software-based functions that customers can reserve as needed, or through automated driving.

They are also planning to simplify the buying process with fewer options at the start. While buyers will still choose what the company refers to “the hardware”, The new cars “will have virtually everything on board and customers can add desired functions on demand at any time using the digital ecosystem in the vehicle. This will significantly reduce production complexity.”

VW has set out ambitious targets for its expanding electric car fleet. By 2030 it plans that all-electric vehicles will make up more than 70 per cent of all its sales in Europe, and 50 per cent of sales in both the US and China.

Meanwhile, Porsche and the Volkswagen Group are reportedly considering an entry to Formula One if the next engine regulations due to be introduced in 2025 promote sustainable fuels.

Porsche Motorsport vice-president Fritz Enzinger was quoted as saying it would be “of great interest if aspects of sustainability -- for instance, the implementation of e-fuels” played a role.

“Should these aspects be confirmed, we will evaluate them in detail within the VW Group and discuss further steps,” he said. “Porsche and Volkswagen AG are observing the constantly changing regulations in all relevant racing series around the world. This is also the case with regard to the emerging new engine and drivetrain regulation for Formula One from 2025.”

Formula One’s governing body, the FIA, last year delivered the first barrels of 100 per cent sustainable fuel made from bio-waste to engine manufacturers for testing and validation.

It said the aim was a mandatory requirement of 100 per cent sustainable fuels in F1, which has target of being a net zero carbon sport by 2030.