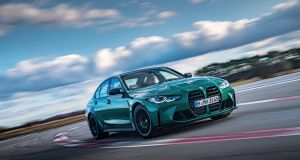 The M3’s grille is a ‘love it or loathe it’ look for which BMW makes no apologies.

If you peeled away the marketing hype and the electronic fripperies, what is BMW about?

The claim is that BMW builds “the ultimate driving machine”. That tagline might be hard to fathom from behind the wheel of a 2 Series Gran Tourer, but it’s an ambition that’s at the core of the company’s elite M Division. And at the heart of the M Division is, supposedly, the M3.

Now in it’s sixth generation, the original E30 model from 1986 has become a motoring landmark. Only 18,000 units of that M3 were sold, yet it’s image must have adorned at least 1.8 million bedrooms and garage walls. It has been a touchstone for BMW for more than 30 years.

Now comes the latest version – offered as an M3 saloon or M4 coupé – with a promise to be the fastest iteration yet. It’s also likely to be the last one powered solely by a petrol engine.

In this case it’s a six-cylinder inline three-litre twin-turbo engine, putting out 480bhp and 550Nm of torque in the ‘regular’ version, or 510bhp and 650Nm in the M3 Competition. The same engines power the M4 coupé versions.

Before we get into the mechanical details, there is one inescapable talking point: that grille. Carried over from the latest BMW 4 Series coupe range it’s a ‘love it or loathe it’ look the car company’s designers make no apologies for its divisiveness.

On regular cars and particularly on electric ones, it serves no cooling purpose, but here at least M Division engineers claim it’s important to keep the engine cool. Designer Marcus Syring even goes so far as to claim they’ve taken away the outer frame on the trademark ‘kidney frame’ to allow for even better engine cooling.

Round the back there is another standout feature in the form of a rear diffuser, taking its styling touches straight from Formula One. It’s certainly adds to the racing aesthetic of the M3, even if it makes little difference to the car’s actual performance.

If the grille wasn’t striking enough, BMW has gone wild with the colour palette for this car, both inside and out. There is nothing stealth about this supercar saloon.

One nice touch on the car is the decision to go with larger wheels on the rear – by one inch – which gives the car a lovely side profile.

But M3s aren’t bought on looks alone. This car is about performance and the latest generation has its sights set on track use. BMW reckons the Competition versions will make up a sizeable proportion of global sales, with the US the leading market for M3s and M4s.

That US focus, and an eye to Asia, is perhaps why the M3’s drifting ability has received more attention. Along with the car’s dynamic stability programme featuring a new M Dynamic Mode that delivers “easily controllable drifts” the optional software pack includes Drifting Analysis features.

The M3 also gets all-wheel drive on the Competition versions, which also features the company’s eight-speed single-clutch auto transmission. However, opt for the ‘regular’ M3 and you get the six-speed manual gearbox with gear shift assistant.

The number of optional set-ups of the suspension, throttle and engine for road and track is into double figures, and there is even a choice of settings for the brake pedal – either regular comfort or more aggressive track performance.

With 500bhp and virtually all the electronic driving aids and adjustments that feature on the larger M5, it begs the question as to what differentiates this model from the rest of the M Division pack aside from body styling.

Hagen Franke, product manager for the M3 and M4 cars, explains it best. “To put it simply, the M5 is a really potent autobahn cruiser, where its dominant feature is as a fast weapon for a businessman who travels a lot and occasionally goes to a racetrack where this car can perform as well. Compared to that, the M3 is more agile, the one to be used on the [regular] roads with higher frequency use on track. So it’s the more agile car when it comes to corners, despite having less power than the M5.

“In a straight-line acceleration the M5 is still going to be the one with the kidney grille in front, but once the roads get a little bit narrower – like in the Alps, for example – then the M3 will be the more joyful car to throw around the alpine passes.”

Yet for those mountain twists and turns, for many drivers the M2 has become the natural inheritor to the original E30’s ‘ultimate driving machine’ tagline, particularly as recent generations of the M3 moved closer to the M5 in terms of proportions and tech wizardry.

If this is to be a finale for M3 petrol power, however, there is sure to be added interest in its latest petrol-fumed foray when it lands in Irish showrooms in time for summer sales.