Audi wants to put the world on your windscreen 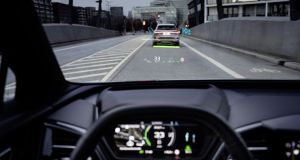 The Q4 e-Tron’s new display projects higher up the windscreen, and appears to be Soccer Saturday-friendly 70-inches across.

Slip aboard the new Audi Q4 e-Tron electric SUV and the first thing you’ll notice will probably be the surprising amount of interior space. Although the Q4 is pretty similar to the petrol and diesel Q3 on the outside, the cabin cleaves closer to the hulking Q7 when it comes to passenger space.

The second thing you’ll notice is the steering wheel - squared off at the top and bottom, it look almost like the wheel from a new Hyundai Tucson has mated with the ‘Quartic’ wheel of the 1970s Austin Allegro.

Like the Hyundai, it seems to have a wheel-within-a-wheel, with an inner spoke design picked out in brushed aluminium. The hexagonal outer rim looks almost as if someone put one of Peugeot’s teeny-tiny wheels through the photocopier and hit ‘embiggen.’

Get past those two points, sit behind the quirky wheel, and switch on the power and the third, possibly the most important, thing that you’ll notice is the huge heads-up display (HUD).

HUDs have become common on cars, appearing on models as affordable as a Mazda 3 for example, and project some useful information onto the windscreen. The idea is that your speed and sat-nav dimensions seem to float just above the bonnet, directly in your eyeline.

HUDs were originally designed so that fighter pilots could keep their eyes on a target ahead. In cars, they’re designed so that you can keep and eye on your speed and yet your eye on the road.

Audi is now taking the HUD to the next, logical step - make it bigger. Current HUDs project only a small shape and relatively limited information onto the screen. The Q4 e-Tron’s new display projects higher up the windscreen, and when it’s switched on, the relationship between the projection and the driver’s eyeline means that the HUD appears to be Soccer Saturday-friendly 70-inches across.

This allows Audi to project more information onto the HUD. While your speed is an obvious thing to include, so too are sat-nav instructions.

Moving beyond simple arrow instructions, the Q4 e-Tron’s HUD uses what Audi is calling a ‘virtual drone’ which hovers in the road ahead, appearing as a bright, blue chevron pointing you down the right turning. When you reach your destination, a chequered flag is displayed at the precise point you need to stop.

The system can also monitor other traffic around you, warning you with coloured bars when you’re getting too close to the car in front, and even interpreting the ‘body language’ of other cars to predict how they’re going to move.

Audi says that while the hardware of the bigger, bolder HUD is common to all of the VW Group vehicles; “we have a part, the heart, the core, that is exclusively for our cars.”

The Q4’s engineers also claimed that the plan is to avoid overloading the driver with projected data, even when the system is eventually updated to include infotainment information.

“The data itself is chosen to be contextual and situational. So actually we don’t want to overload the driver with a lot of information. The, the meaning of augmented reality and the use of it is to show the information you need, when you need it. And this is exactly what we’re doing.”

Not that Audi has been shy of fitting screens inside the Q4’s cabin, including a central touchscreen for the infotainment system thats a whopping 11.6-inches across, the largest screen that Audi has ever fitted to a car (not sure that’s a boast to be honest…).

There are also new touch-sensitive controls on the steering wheel, and a delicate, shelf-like central console. Audi claims some storage innovations in the cabin too, including a vast 4.4-litre box under the arm-rest, and bottle holders tucked into the grab-handle so that your drinks don’t rattle around in the big bin at the bottom of the door.

Audi’s also pushing on some vegan-friendly buttons with the interior. While traditional, PETA-baiting leather options will be available, there will also be the option of Dinamica seude, which is made from 45 per cent recycled polyester, and there’s more recycled PET bottles in the seats.

Underneath, the Q4 e-Tron uses the same MEB platform and batteries as the more affordable Volkswagen ID.4 and Skoda Enyaq iV. That should mean that top-spec models have a one-charge range approaching 500km.

Oddly, given the vast interior and the allusions to the larger Q7, there won’t be a seven-seat version (nor is there a ‘frunk’ - a small, extra boot under the bonnet) but Audi hinted that a dedicated electric seven-seater is in the works.

There will be a sleeker, sportier (in looks at least) Sportback model, aping the lineup of the larger e-Tron quattro SUV electric car.

The Q4’s styling, still hidden behind camouflage tape at this technical presentation (but just imagine an ID.4 with squarer, bluffer styling and an Audi badge and you’re getting there…), will be revealed in full next month, and the car will go on sale across Europe in the summer of 2021.