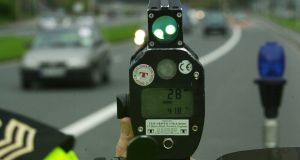 The Road Safety Authority keeps a record of penalty-point offences by foreign licence holders, and licence details can be confirmed by this ‘ghost’ file. Photograph: Cyril Byrne

Fifteen motorists received a nasty shock when they exchanged their UK driving licences for Irish ones due to Brexit – an immediate driving ban.

Figures released to The Irish Times under the Freedom of Information Act show that 15 drivers who exchanged their British or Northern Irish licence for a licence in the Republic had accumulated 12 or more penalty points and, as a result, faced an immediate six-month disqualification.

Penalty points cannot be applied to driving licences from another country. However, the Road Safety Authority (RSA) operates a “ghost” file that keeps a record of penalty-point offences by holders of a foreign licence, where the licence details can be confirmed.

Garda sources said this was usually as a result of gardaí stopping the motorist and taking their licence details.

Between 2019 and December 31st, more than 71,000 UK or Northern Ireland licences were exchanged for Irish licences to legally permit the holders drive in the State after Brexit came into effect.

Since that date it is no longer legal for residents in this State to drive on a UK licence.

According to the FoI records from the RSA, 15 drivers who exchanged their UK or Northern Ireland licence had 12 or more points and faced an immediate ban.

Five drivers had 11 points, two drivers had 10, and 118 had nine points. More than 8,000 points in total were allocated to drivers who exchanged a UK or Northern Ireland licence for an Irish one, the records show.