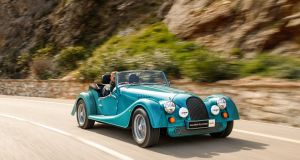 Power comes from either a 2.0-litre four-cylinder turbo engine with 255hp or a turbo 3.0-litre inline-six with 335hp.

You might think it somewhat mad to be setting up a dealership, for expensive sports cars that trace their design lineage to the 1930s, in Ireland, amid a pandemic in 2021.

Wayne McCarthy would agree with you. “If someone says I’m crazy, I’d have to agree with them. But look, sometimes lovely things come out of mad things. And as far as Covid goes, I think that in some ways the lockdown has shown people that they need a hobby, they need a distraction, they need something that takes them out of the mundane world.”

As ever, we’re duty bound to remind anyone who scoffs at the notion of a business being set up amid global and national turmoil, that Dunnes Stores opened its first branch in 1941. Some of that can-do spirit certainly seems to be pervading McCarthy’s Edgewood Automotive headquarters in Fermoy, Co Cork. McCarthy, who spent 25 years selling Saabs, established Edgewood in late 2019 as a way to feed and exploit his fervour for classic cars.

“We’ve actually been quite busy during Covid,” says McCarthy. “Because, obviously, people can’t really use their classics. So they’re coming to us to store them and carry out work on them.

“With Morgan, I had first met people from the Morgan Motor Company back when I was exhibiting at the classic car show at the NEC in Birmingham a couple of years ago. Having plucked up the courage to go into classic cars as a business, I thought that a Morgan franchise would make a lot of sense, because obviously there’s people out there who love the idea of a classic car, but don’t want to drive – or mind – a real classic.”

That, in a nutshell, is the central appeal of a Morgan. While the styling up top speaks of PG Wodehouse and Dad’s Army, underneath the cars are actually cutting egde. Both of Morgan’s primary models, the Plus Four and the Plus Six, use modern aluminium chassis with aerospace-style bonded and riveted construction.

Power comes from either a 2.0-litre four-cylinder turbo engine with 255hp or a turbo 3.0-litre inline-six with 335hp. Both engines come from BMW, a company now known for letting other carmakers borrow its mechanical packages, which hints at the respect shown for Morgan’s mix of traditional leather, wood, and hand-formed aluminium, and its ability to integrate more modern construction and safety techniques.

“They’re quick cars” says McCarthy. “Don’t forget, the Plus Four weighs only 1,000kg. They’re a quirky car to drive, because you’re effectively sitting on the back wheels, with all that bonnet out in front, so you have to take account of that in corners. It’s almost like dealing with the overhang of a bus, but the other way around.”

For all that quirk, though, McCarthy says he’s amazed at the level of brand recognition for Morgan in Ireland. Even people who would not count themselves as petrolheads, it seems, know what a Morgan is.

Will that translate into sales, though? McCarthy is being suitably cautious for now, saying he’d be happy with single-digit annual sales for the first couple of years. His plans include opening a boutique city-centre Morgan store in Cork, as well as setting up “cars-and-coffee” style events for Morgan fans and potential customers when it’s safe to do so. There is also a market in the estimated 150 Morgans in Irish ownership, which all need spares, repair and servicing.

How much will they cost?

How much will a Morgan actually cost you? That’s an open-ended question as the cars are effectively made bespoke for each customer. But McCarthy says that going by the average specification, a Plus Four will cost about €100,000, while a Plus Six will buyer will need to find closer to €140,000. That puts both cars roughly between a Porsche Boxster and a Porsche 911 in terms of price – expensive, but perhaps not outrageously so.

McCarthy is clearly willing to put his money where his mouth is, but was reluctant to talk specific investment costs for bringing Morgan back to Ireland, other than to say that Morgan itself has been understanding regarding up-front franchise costs, and that he is close to finalising a deal for his Cork city-centre store.

Crazy? Maybe so, but for some of us the sight of a Morgan swooshing past, top down and sun glinting on its chrome, is enough to give a massive mental uplift at a time when we all need just that.