First drive: Fiat has gone retro with this foray into the all-electric world 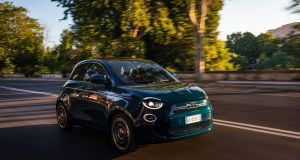 Fiat has returned to the retro route with its foray into the all-electric world. And why not, when you have a car that’s this cute? The risk for the Italian brand is that, with little else in the model range, it is increasingly perceived as Italy’s answer to Mini, a car brand with one model format that’s stretched, shrunk and decapitated to make a handful of secondary derivatives.

Fiat was fully aware of this interpretation and, by all accounts, considered a complete design reinvention.

But with so much upheaval in the car market, it’s worth reminding everyone that this brand has some worthwhile heritage to back it up. So Fiat went with the familiar. And it actually makes great sense.

Car designers are battling with the front nose of cars, now that radiator grilles are no longer needed (can someone pass on that memo to BMW please?) However, it was a design dilemma this Fiat didn’t face, for the original rear-engined 1957 500 never had a grille in the first place. So job done.

The retro card is not only being played in terms of the car’s design. Production is returning to the company’s historic Mirafiori facility in Turin. It’s apt for a car that now can proudly boast it’s not only created, designed and engineered in Italy but “Made in Turin” as well.

Amid the recent stormy weather, a left-hand drive 500 with Turin plate and the larger 42kwh battery pack underfloor and 87kw electric motor under the bonnet landed on these shores.

I’m lucky that loops within my 5km zone offers me a rich mix of roads, from motorway, national routes to proper potholed back roads. And, of course, some urban driving complete with mountainous speed bumps. Normally at this time of the year, we’d be putting Europe’s Car of the Year finalists – this 500 was one – through their paces at the Ceram test facility, north of Paris. A carmakers’ playground, it features test sections replicating nearly every road condition on the planet, certainly all those on this continent. Yet the selection of routes in north Co Dublin didn’t let me down.

The weather gods added their talents to the test as well. By the time I went out for a night drive, the car was being power-hosed with rain, while several stretches of road did mean impressions of rivers. The little 500 held its ground. To paraphrase Thomas the Tank Engine, it was the little electric car that could.

Certainly in Normal mode the little Fiat seems quick from a standing start. We left several German premium cars sitting at the lights

The 500 manages to lay down its power smoothly, without wheelspin, a feat not always mastered by small electric rivals. Part of this is down to limiting the car’s acceleration and torque, but getting that balance right isn’t always easy. In front-wheel drive cars like this, you can easily encounter that woeful mix of wheelspin and torque steer, where the driver is left wrestling with the steering wheel for control. Fiat manages all this with aplomb.

A 0-100km/h time of 9 seconds seems longer than it feels behind the wheel: certainly in Normal mode the little Fiat seems quick from a standing start. We left several German premium cars sitting at the lights.

Clearly if Fiat wanted to carry on playing the retro card it would have mounted the motor on the rear axle and replicated the rear-wheel format of the 1957 model.

However, the car’s chief engineer, Laura Farina, told The Irish Times that her goal was to deliver an electric car that current supermini drivers would feel at home driving.

That’s why even in the most energy saving mode – Sherpa – it isn’t quite the one-pedal driving dynamic you get with some electric cars, where the car effectively brakes when you lift off the throttle. With the 500, the slow-down is more gradual.

That aim to replicate life with a “normal” supermini is also why, for example, the charging port isn’t housed in the front nose, but on the rear side where a regular filling cap would be on a petrol-powered 500.

She’s also eager to make clear that this is not an indication the electric 500 shares the same bodywork as the petrol model: only 4 per cent of the electric car is shared with its petrol sibling.

Let’s talk about that interior for a minute: it’s a massive leap forward in terms of quality. The mix of touchscreen and buttons are just right, and you don’t have to scroll through several menus to turn the temperature down.

Alas, while chief engineer Laura Farina says the rear leg room is the same on the electric as the petrol version – an engineering feat given the heft battery under the floor – that’s not exactly a major boast, for back seat space has always been an issue with regular 500s.

Fiat has adopted an optional rear-opening third door to make access easier, particularly for parents needing to load small children into child seats. However, it’s only on offer in left-hand drive markets at present. Even if it does make it to Ireland, the door is only going to be fitted on the right-hand side, which isn’t ideal as it means when you are pull up on the street it will open out onto the road rather than the footpath.

There’s also a ragtop convertible version on offer, a funky addition considering the fact most electric cars are hefty crossovers with little in the way of open-top fun.

Fiat claims a range of circa 320km from the larger battery pack in the regular hatch, dropping to 303km in the convertible.

I totalled 120km during my time in the car and averaged 5.6km per kwh. Fiat claims the usable capacity of the larger battery is 37.3kwh, which would give me a range of 210km on a full charge.

That’s arguably enough for the sort of urban commutes most 500 buyers are looking for in a car, although the smaller 24kw battery and 70kw motor – with a claimed range of 185km – might require potential buyers to carefully consider their access to charging points.

Admittedly I was flitting between the three driving modes – normal, eco and Sherpa – and most of the driving was on national roads. The natural habitat of this car is going to be in 60km/h zones or less.

The ride is slightly harder than I recall on the regular petrol Fiat 500, but there’s also less bodyroll, leaving you in more control.

Price remains an unknown and that’s the biggest issue with this car, but arguably the key to its potential success. In the UK, before grants, the 500 hatchback with the smaller 24kwh battery pack starts at £22,214 (€25,716), while the 42kwh version stats at £25,714. Even allowing for extra charges, the generous Irish grants and tax rebates totalling €10,000 should make the 500 a very competitive offering when it lands here later this year.

Which would be a first, for the regular 500 that was rolled out in 2007 was arguably overpriced. Incidentally, the fossil-fuelled version will remain on sale for the time being, with the current body styling and platform.

If Fiat Ireland can get the 24kwh version to land at less than €23,000, the Turin-based brand could have a surprise Irish hit on its hands, and one that rekindles a lasting soft spot many Irish motorists still have for the brand.

It would be timely as well, for Fiat is ripe for a revival under its new French owner Stellantis, which gives it the chance to build a fleet of new models on platforms that have proven success with Peugeot and Citroen. But a lot depends on this electric 500 sparking a new era of interest.