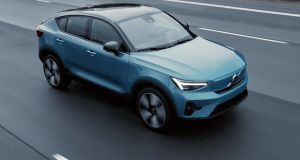 The new C40 EV forms a cornerstone of Volvo’s plans to become a fully-electric brand by 2030, as the company says that ‘climate change is the ultimate safety test.’

The new C40 will be the first Volvo model to be sold entirely as an electric car. Essentially, it’s a coupe version of the XC40 SUV, with a sleeker roofline, and a chopped-off rear-end and dramatic wraparound tail-lights.

It uses two electric motors, and has a large 77kWh battery. Volvo is making a relatively tame 420km one-charge range — quite short for a model with a battery that large — but Volvo’s technical chief claims that the range will improve over time.

The battery can be fast-charged to 80 per cent power in around 40 minutes. The C40 will come with infotainment software supplied by Google Android — an innovation first trialled by Volvo’s spinoff electric brand, Polestar — and will have entirely ‘Vegan’ leather-free upholstery options for a cabin that is largely drawn from the existing XC40.

The new car uses a developed version of the CMA platform, which is also used by the existing XC40, as well as Geely’s Lynk&Co models, and the current version of the London Taxi (Geely also owns the company that makes the venerable black cab).

The new C40 EV forms a cornerstone of Volvo’s plans to become a fully-electric brand by 2030, as the company says that “climate change is the ultimate safety test”. That’s hardly surprising — both Ford and Jaguar have recently announced plans to go completely electric by the same date, and like those two brands Volvo will have to work fast as it currently only has two electric cars on sale; the XC40 Recharge SUV and the Polestar 2, as sold by the Swede’s spinoff electric high-performance brand.

To go with the new C40 EV and the XC40 Recharge, Volvo will also launch an all-electric version of the new XC90 large SUV, due next year, and an EV model of the XC60 mid-size SUV. There will also be a new small Volvo, potentially badged as XC20, co-developed with Volvo’s Chinese majority shareholder Geely, and riding on an all-new electric-only platform. That will compete with the likes of the Audi Q2 and Mini Countryman.

Beyond that, Volvo wants to be fully climate-neutral in producing its cars, right along its supply chain, by 2040. The Swedes also say that they are implementing full audits of battery raw material supply chains ‘right down to the mine’ so as to ensure that substances such as cobalt and lithium — crucial for battery design — are being ethically sourced.

“To remain successful, we need profitable growth. So instead of investing in a shrinking business, we choose to invest in the future – electric and online,” said Håkan Samuelsson, chief executive of Volvo Cars. “We are fully focused on becoming a leader in the fast-growing premium electric segment.”

No long-term future for ICE

“There is no long-term future for cars with an internal combustion engine,” said Henrik Green, chief technology officer. “We are firmly committed to becoming an electric-only car maker and the transition should happen by 2030. It will allow us to meet the expectations of our customers and be a part of the solution when it comes to fighting climate change.”

Indeed, Volvo just last week announced that its internal combustion engine division will be spun-off from the company this year, and merged with a similar division from Geely. This new standalone engine-maker will continue to supply Volvo with new engines up to 2030, and will also develop new internal combustion powertrains for markets in which there will be continued demand past 2030.

As a stepping-stone, Volvo plans for half of all its global sales to be fully-electric by 2025. It’s also planning to move all of its electric car sales to online-only status, a move which could see Volvo taking a leaf from Tesla’s book and selling directly to consumers, bypassing the traditional dealership model.

Volvo says that it will “radically reduce complexity in its product offer, and with transparent and set pricing models” as it shifts to electric power. The early shoots of this can be seen already at Polestar, Volvo’s spinoff all-electric brand. Polestar shuns the normal ‘plate glass’ dealer model in favour of city centre boutique stores.

“The future of Volvo Cars is defined by three pillars: electric, online and growth,” says Lex Kerssemakers, head of global commercial operations. “We want to offer our customers peace of mind and a care-free way of having a Volvo, by taking away complexity while getting and driving the car. Simplification and convenience are key to everything we do.”

Volvo also wants to ramp-up its ‘Care By Volvo’ subscription service, in which it will bundle all of the normal payments associated with car ownership — the loan for the vehicle, servicing, warranty, even tyres (which will be all-season capable as standard), insurance and tax — into one monthly payment. Within the plan, you can change or update the car you have with three month’s notice.

Does that mean the death of the traditional dealer as far as Volvo is concerned? Well, officially not. According to Kerssemakers; “While Volvo Cars is investing heavily in online sales platforms, it will build stronger customer relationships together with its retail partners.

“They remain a crucial part of the customer experience and will continue to be responsible for a variety of important services such as selling, preparing, delivering and servicing cars. Online and off-line need to be fully and seamlessly integrated. Wherever the customer is in their journey – online, in a showroom, in a Volvo Studio, or driving the car – the customer experience needs to be top-notch.”

Doubtless, many of Volvo’s dealership partners will be carefully reading the fine print in their franchise contracts all the same.

David Thomas, managing director of Volvo Car Ireland told The Irish Times: “We are currently exploring how we can implement this in Ireland. Online selling is our future. However different markets have different level of maturity and pre-requisites that will impact the pace and acceptance. We have been in constant contact with our retailers about these future developments as this is something we will need to do together.”

Responding to fears that this could lead to a reduction in the dealer network for Volvo, Mr Thomas said: “We recognise that this will bring some changes to the way they operate, but there will be plenty of opportunities for retailers. We will transform our business model together with our retail partners, who will play a critical role also in the future.

“We don’t foresee this impacting the size of our network. Cars are very physical products that need to be delivered, serviced, and maintained, and the retailers play a vital role in the relationship with the customer, offering test drives, the face-to-face interaction when wanted and when possible, and other type of support.”

Sandymount semi for €1.3m is ready to move into