Today marks 30 years since Eddie Jordan’s F1 debut, but much of the credit should go to Coleraine’s Gary Anderson 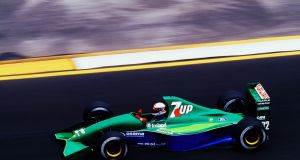 If Jordan’s race car had been anything less than brilliant the team would not have survived to mid-season and sunk without trace later in the year.

Today marks 30 years to the day since Eddie Jordan’s debut as a Grand Prix constructor when the 7UP Jordan - Ford 191, driven by the underappreciated Bertrand Gachot, started the US Grand Prix in Phoenix Arizona, curtain raiser for the 1991 F1 season.

To get to the grid at all was an amazing commercial achievement by Jordan, and the team’s constant financial struggle forms the basis for the popular Netflix series “Drive to Survive”.

But for all those financial challenges, if Jordan’s race car had been anything less than brilliant the team would not have survived to mid-season and sunk without trace later in the year.

Eddie Jordan had been a brilliant young driver in Ireland, winning the Leinster Trophy in 1978. He moved to English F3 the following year, where he competed against all the world’s best up and coming drivers and performed respectably.

However, race team management was what he excelled at and all through the 1980s his team progressed in F3 and then F3000 - the series just below F1. Jordan’s premises were the modest Unit 4A in Silverstone Industrial Estate, neat Towcester and the cars were all made by other manufacturers such as Crossle, Chevron, Reynard, March and others.

The 191 car was the first car he attempted to manufacture in-house and he was lucky to have the frugal, brilliant, efficient and articulate Gary Anderson to lead that effort.

Anderson was born in Coleraine, left school at 15 and headed to England where he worked in the smaller racing teams - but quickly progressed to being a mechanic in the F1 McLaren team - thanks to his strength, stamina and brainpower. In the early 1980s he set up his own team - Anson - and built F3 cars - most notably for himself and Dundalk’s Tommy Byrne.

Anson fell victim to the perennial up and downs of motorsport and Gary then designed cars for Reynard before accepting Eddie Jordan’s challenge in February 1990 to design the team’s challenger for the year ahead.

Anderson was well versed on the regulations and had an understanding of where aerodynamics, as a science, was going.

Adrian Newey’s 1989/90 Leyton House F1 car was showing the way and Anderson worked closely with the wind tunnel team at Southampton University to come up with a high downforce / low drag design.

Anderson designed the car with a small team. “We had just five people in total. We operated in the F3000 race team premises and actually that worked well,” he told The Irish Times.

The car initially was to have a Judd V10 engine but in August an (expensive) option to use the Ford V8 HB came up and Jordan grabbed it. “That came about as Andy Greene and I stopped for a cup of tea late one Sunday night after a wind tunnel session in Southamption. They was a stranger there and we got talking and he mentioned he worked with Ford Cosworth and they might be looking at running a second team. He gave me his card which I passed on, first thing the next morning.

“It meant a bit of a redesign and there were bumps on the bodywork to fit the Judd, which we just left there - but the Ford was a neat package, very light and powerful.”

Anderson was very aware of the financial constraints of the team - there would be very little testing, they could not afford crashes: “We knew it had be a strong, confidence inspiring and easy to adjust and maintain.”

John Watson, a world championship runner up, gave the 191 the thumbs up when he was first to drive the car at Silverstone in November 1990.

Jordan picked two drivers who could bring sponsorship to the team - his old F3 rival Andrea de Cesaris and young turk Bertrand Gachot. The pressure on the two drivers in Phoenix was immense as there were 38 cars chasing 26 grid places. There was prequalifying (where 4 of 8 would get though) and then qualifying where only 26 of 30 would get on the grid. De Cesaris just missed prequalifying while Gachot managed to qualify a brilliant 14th and finish an even more amazing 10th.

The rest is history. Starring at Monaco in May - two cars in the top 6 in Canada in June - the Schumacher debut and almost victory for De Cesaris in Spa in August and finishing the season a stunning fifth of the 19 teams.

The finances were still horrible, but that’s another story.

To this day, many consider the Jordan Ford 191 to be the prettiest F1 car ever made.

Anderson led the technical effort at Jordan until 1998 when his car allowed Damon Hill give the team his first win. In 1999 he went to Stewart where Johnnie Herbert gave that team its first win before they became Jaguar and then championship winning Red Bull Racing.

Anderson’s engineering talent was recognised in 2001 when he was made Honorary Fellow of the Institution of Engineers of Ireland, their highest honour.

He remains a must sought after technical commentator - for the BBC, Autosport and other premium outlets.

As these eras evolved, the designers became the stars, most notably Adrian Newey, but what was amazing is that Gary Anderson’s record of achievement - designing winning cars in F1, Indycars and elsewhere - has been second to none - except Newey. Ireland can proudly claim one of those car design stars as its own.