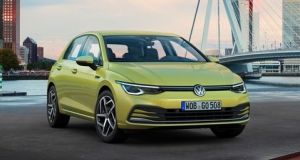 Volkswagen Golf 8: There’s no doubt that the Golf is still a hugely important car for Europe and for Ireland.

The launch of a new Volkswagen Golf is always an event of significance, but one gets the feeling that the reveal of this, the eighth generation of VW’s best-seller ever could bear more significance than most. Depending upon how the relationship, and especially the sales balance, between this Golf and the new ID.3 all-electric hatchback plays out over the next decade or so, we could either be peering at the endgame for the Golf, or its rebirth into a new electric future.

For now, all VW will say is that the two cars will co-exist. A spokesperson told The Irish Times that: “The Golf is based on the enhanced modular transverse matrix (MQB). Its electrification will include the plug-in hybrid. The ID.3 is based on the modular electric drive matrix (MEB), which is designed exclusively for pure electric vehicles. Both vehicles will therefore serve different mobility needs and customer requirements. The Golf and ID.3 will therefore sit in parallel to each other in the Volkswagen brand’s range of products.”

There’s no doubt that the Golf is still a hugely important car for Europe and for Ireland, in spite of the fact that this year, in the Irish market, it has been outsold by both a direct rival (the Toyota Corolla) and two in-house rivals (the Skoda Octavia and VW’s own Tiguan). Even so, thanks to some 36-million Golf sales around the world since 1974, one in every five family hatchbacks on Irish roads is a Golf, and it accounted for almost 20 per cent of such sales in September of this year.

Electric power is at the core of this new Golf lineup, just not in the way you’re expecting. There will be no all-electric version of this Golf; no replacement for the current battery-powered eGolf. There will be hybrids, though. Lots of hybrids.

That hybrid line-up starts with a new range of mild-hybrid engines, based around VW’s existing TSI turbocharged petrol engine family. Three eTSI engines will be offered, with power outputs of 90hp, 130hp, and 150hp. According to VW, the addition of a 48-volt electrical system, a compact lithium-ion battery, and an integrated starter-generator means a 10 per cent saving on fuel economy, compared with a standard, non-hybrid engine. Unlike a Toyota hybrid, the VW mild hybrid cannot drive the Golf on battery power alone, but instead allows for an earlier (and longer lasting) activation of the stop-start system in traffic. It also means there is less demand on the engine to provide electrical power for other systems (lights, infotainment, heating etc) so that helps to ease fuel consumption too.

For the first time, the Golf will also be available with two plugin-hybrid versions. The first will have a combined power output of 204hp, while the other, a higher power version with 245hp, will gain the GTE badge. Both use a 13.1kWh battery, which should provide at least 60km of electric-only range when fully charged up.

There will be conventional turbocharged petrol engines too, with 110hp and 150hp. Volkswagen Ireland expects the 110hp TSI petrol to be the best-selling model here.

The Golf 8 will also be available with VW’s new family of diesel engines, for which the company is claiming an 80 per cent reduction in NOx emissions, thanks to the addition of anew AdBlue injection system. VW claims that: “The new TDI engines are amongst the world’s cleanest combustion engines” and they’ll come with power outputs ranging from 115hp to 150hp. There’s a new six-speed manual gearbox for all engines, and the plugin-hybrids will come with a six-speed DSG automatic.

Performance versions of the Golf will be available, just not from launch. VW has already confirmed that a new 300hp Golf R is being prepared, as is a high-performance diesel GTD. And the famed GTI? There will be one, but VW is going to keep us on tenterhooks for a while.

In the Golf’s cabin, there’s also plenty of electricity on show, as the car moves to an entirely screen-based cockpit. Even basic versions will come with a 10.25in digital instrument panel and an 8in infotainment touchscreen display. There’s also an extra, small, touchscreen to the side of the main instruments that controls items such as lights and screen demisting. Optionally, you can expand the main infotainment screen to a full 10in, and there’s also an optional heads-up display.

The centre console has been designed to be cleaner and simpler than before, and cars equipped with the DSG dual-clutch automatic gearbox get a new, much smaller, gear shifter which frees up more space.

Whichever options you select, all Golf 8s will come with an Online Connectivity Unit (OCU) – a box, equipped with a Sim card, that constantly connects the car to the internet. That allows for features with which you’ll already be familiar – live traffic updates, parking availability, fuel pricing and so on – and some you’re not – you’ll be able to activate extra functions, for a fee, after you’ve bought the car, while Amazon’s “Alexa” voice assistant is already embedded in the Golf 8’s electronics, plus there will be access to streaming music services and podcasts, internet radio, and over-the-air software updates.

Buyers of the new Golf will be offered a package of connectivity options, bundled under the WeConnect (basically an unlimited service) and WeConnect Plus (designed to be free-to-use across Europe for either one or three-year periods). There will also be a company-focused WeConnect Fleet, which will monitor usage, mileage, consumption, and maintenance.

Optionally, and depending on your choice of smartphone, you’ll also be able to do away with a conventional key for this new Golf. Samsung phones will be able to double-up as your Golf’s key. Simply set the phone up in the WeConnect system, and then you just need to hold the handset near the door handle to unlock, and then place the phone into the centre console to start the car.

Volkswagen claims that this Golf will also be the safest Golf ever, and not just because it has a bevy of airbags. It’s also coming with “V2X” technology that allows it to both send and receive data to and from roadside safety systems in an 800m radius. This allows information to be passed regarding localised traffic, road and weather conditions, and can give warnings of accidents or delays ahead, or even patches of ice on the road.

On top of that, the Golf 8 will also have the new Travel Assist function – the Golf’s first big step into autonomous driving. At speeds of up to 210km/h (on the autobahn only, please) you can leave the steering, lane-keeping, and braking up to the Golf, as long as your hands are on the wheel and you’re keeping your eyes on the road, of course. Fail to pay attention, and the electronics will bring the car to a safe stop.

Other safety items include new LED lights, and a forward collision detection system that can prevent you turning into another car at a junction.

Style-wise, there’s nothing dramatically new here – it’s very much in keeping with the traditional Golf idiom, although the downward-sloping front end does mean it looks a touch downcast, compared with the more expressive ID.3. A portent of what’s to come, perhaps?

The new Golf will go on sale in March in Ireland, and while Irish prices won’t be announced for a while yet, we do know that standard equipment will include LED lights front and rear, keyless start, digital instruments and the 8in infotainment screen, online services, a multi-function steering wheel, automatic air conditioning, lane-keeping assistant, autonomous emergency braking with pedestrian detection, and the C2X data communications system. Trim lines in Ireland will start with plain old Golf, then move to Life, Style, and then to the top grade R-Line.