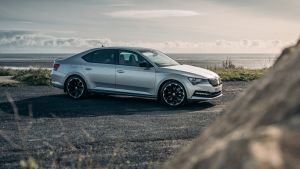 You would think that a car maker, launching a new(ish) product that’s a four-door saloon, with a mostly diesel-powered engine lineup, and with a mass-market brand on the nose would be on a hiding to nothing. Diesel is surely anathema to the modern buyer, as is the homely four-door saloon shape. You’d reckon that they might be better off trying to flog Betamax video recorders, or executive car phone brief cases.

The Skoda Superb rather confounds all of that. In spite of the inexorable rise of the wannabe 4x4 market, Skoda’s big saloon has consistently sold more and more every time it has been relaunched. In fact, 1.2 million of them have been sold since the “stretched Passat” original went on sale in 2002.

For all that we’re enthralled by SUVs, it does seem – rather refreshingly – that there’s still room in our hearts for a 'proper' car

You’ve almost certainly been in a Superb at some point. Their ubiquity as a taxi makes it all but inevitable, and you can see why the for-hire fraternity likes them so much – lots of rear legroom, a massive boot for airport runs, and sturdy reliability. In fact, when you put it like that, why aren’t we all buying one?

Well, lots of us are. Again, for those assuming that the market for four-door saloons is a dead rubber, Skoda has sold 1,343 Superbs this year, and that’s a model that’s been on sale for four years now. That’s twice as many sales as Ford has managed with the once-all-conquering Mondeoand four times as many as Toyota’s lauded Camry hybrid.

Mind you, Skoda Ireland doesn’t see those cars, bought new, as the Superb’s true rivals. Instead, it reckons that the Superb is competing for brain space and shopping lists with a four-year-old imported premium German car such as a BMW 3 or 5 Series, or a Mercedes C or E Class.

Surprised? Prepare to be more so. While diesel has become a pariah in the press, most of the Superb’s current buyers still go for black-pump power. In fact, not just most of them, but virtually all – 94 per cent choose diesel.

The familiar 2.0-litre 150hp diesel engine has also been given a good going over

“People still trust diesel,” Raymond Leddy, Skoda Ireland’s head of marketing and product told The Irish Times. “You could see it when we were recently at the National Ploughing Championships, talking to customers. We have people actually coming back to diesel from petrol power or even hybrids, because they weren’t getting the economy they were expecting.”

As for the rise of the SUV sounding the death-knell for “traditional” four-doors, Leddy points to the fact that 77 per cent of the Superb’s buyers are individual, private sales. A mere 23 per cent go to fleets (although neither figure accounts for those user-choosers buying one with a company budget, it must be admitted).

For all that we’re enthralled by SUVs, it does seem – rather refreshingly – that there’s still room in our hearts for a “proper” car.

It’s not even a price thing either. Yes, Skoda generally offers better value than many rivals but a starting point of €30,750 for a basic version puts it on a par with, rather than dramatically lower than, most rivals. Even then, no-one buys the basic car (well, a mere 3 per cent of buyers do, which is essentially no one). Most plump for something much more ritzy, and a full 20 per cent go for the sexy-looking Sportline model, which you won’t get a sniff of for less than €37,250.

A Superb? Sexy? Well, yes – a bit anyway. Skoda hasn’t changed much on the outside – new bumpers, a slightly altered grille, and the staring eyes of the new Matrix LED headlight options (standard on a Sportline, optional on all other models). Around the back, the Skoda badge has gone and instead you get the word Skoda spelled out in chrome letters. Apparently that plays better than a badge in the all-important Chinese market. It is handsome, though. And the Sportline bodykit definitely adds something.

The familiar 2.0-litre 150hp diesel engine has also been given a good going over (new pistons, new injectors, new crankshaft, new turbocharger) but, against the run of customer play, Skoda actually gave us a 1.5 TSI turbo petrol model to play with.

It proves that the 6 per cent of Skoda buyers who choose petrol know what they’re about. The engine is silky smooth (aside from a strong turbo whine as you accelerate) and decently punchy, not least given the size of car it’s hauling around.

Fuel economy hovered at around 8.7-litres per 100km on our brief test, but experience with this engine in other models shows that you should be able to bring that down closer to 6.5l/100km or so if you’re a bit gentler. If you fancy neither diesel nor petrol on its own, then you’ll have to wait a few months to get your hands on a Superb iV plugin-hybrid, a car that Skoda Ireland says it’s already having trouble getting production allocation for (a familiar tale to anyone who’s tried to buy an electric or plugin-hybrid car of late).

The Superb’s other qualities remain undimmed. The cabin is beautifully built (and much better than the early 2015 versions of this model, which tended to rattle with very low mileage) and the legroom in the rear is still of the Club Class, rather than Ryanair variety. The boot is still massive – 625 litres for this fastback version, 660 litres for the handsome estate.

Say it again, after me, SUVs are not as practical as they look.

It also features some new safety gizmos, including a system that pulls the car to the side of the road and stops if you doze off (or worse) behind the wheel, a blind spot monitor that now sees further behind the car, a “predictive” function for the emergency autonomous brakes, and those ultra-bright LED headlights.

What also hasn’t changed is that it’s not the most exciting car to drive. Even in Sportline trim, it’s only the neat little carbon-fibre “gurney flap” boot spoiler that actually brings the sportiness. The Superb driving experience is mostly a languid one. If you want a saloon that entertains behind the wheel, get a Mazda 6.

Then again, the 6 – good though it is – isn’t bucking the trend for four-door saloons. Most mid-size cars such as this, the ones lacking a premium German badge on the bonnet, are more or less at death’s door in sales terms. Not the Superb, though. Can I interest you in a Betamax player, by any chance?