Tokyo motor show: New MX30 will go on sale in Europe next year with a range of 200km 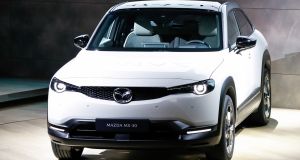 Mazda has unveiled its new fully-electric crossover, the MX30, which goes on sale across Europe next year. The smart looking new model, similar in size to the company’s current CX-3, is the first mass-produced electric vehicle from the brand.

While the presentation at the Tokyo Motor Show focussed on styling and design, with much being made of the return of the so-called “freestyle doors”, what wasn’t mentioned was the range. It turns out that’s 200km on a full charge according to official WLTP measurements, which is pretty limited for family motoring.

On a positive note, the smaller 33.5kWh battery pack means it should be competitively priced, but it may deter some buyers.

As for those doors, they were first deployed in the Mazda range with the RX-8 sports car, and more recently the format also featured on the BMW i3. However, for family motoring, the fact the front door has to be opened first to allow the rear door to release, may be seen as restrictive by some family buyers.

Back to the positives and Mazda is using some innovative design approaches with the interior, particularly as electric cars don’t need transmission tunnels or high middle consoles to house transmissions. Smart touches abound inside and the use of natural cork on some tactile surfaces is a nice touch.

Range remains the most limiting factor, however, and it may prove a tricky call for some buyers when weighing it up against what is a good looking crossover and could well be a competitively priced.