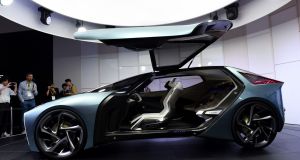 The new Lexus LF-30 electric concept car: heralding the arrival of a fully-electric Lexus next year

Lexus will introduce its first fully electric car next year. Showcasing a new concept at the Tokyo motor show, the company said it will offer a fully-electric version of one of its current models, though engineers and spokespeople declined to give more details. It will be followed in 2023 with a completely new all-electric vehicle, which will be built on a new electric platform being developed by the premium car brand. This will be shared with its Toyota parent. Full details on the new all-electric Lexus will be released next month.

The premium car maker has been a hybrid evangelist to date, abandoning diesel and traditional petrol models in favour of the engine-battery format. However, a spokesman said that while they still remain convinced that for many motorists hybrid remains the better option, the world’s new car market is not homogeneous. So, in countries like Norway, for example, where clean hydro-electric power means electricity generation is not a polluting factor, and with a strong recharging infrastructure in place, full-electric cars are quickly becoming the norm. So car companies must offer full electric models on their fleets to cater for customer demands.

Lexus engineers dismiss talk that the premium car brand and its parent Toyota are late followers to electric, pointing out that the fundamental components of full electric cars - a battery pack, electric motors and a power control unit - are all part of the hybrid systems it has been building since 1997. And they point to the fact that alongside the two new fully-electric models, Lexus will also launch six new hybrids and plug-in hybrids between now and 2023.

As part of the announcement the company unveiled a new concept model, the LF30. A vision of the companies future view of augmented reality (AR) and autonomous driving, the concept car is fully electric and features individual electric motors in each wheel, similar to the technology developed by Toyota for its little three wheeled small car, the i-Road, that’s currently undergoing trials on public roads in France and due to go into full production next year.

While the LF30 concept is unlikely to see the light of day as a production car, it is likely to carry the styling cues for electric models from Lexus, particularly in terms of the front nose.

Takashi Watanabe, chief engineer for Lexus electrified projects, also indicated in his comments the company was looking at contactless charging options - where there is no need to plug in your car, but rather you simply park it over a recharging bay or plate. They are also looking at getting involved in supplying recharging stations, similar to what Tesla is doing with its supercharging stations. It may, however, prefer to become part of a joint venture with others, in the way that VW Group, BMW, Mercedes and Ford have come together to create the Ionitycharging point network.