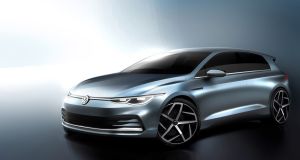 From the sketch shown, it’s clear that the eighth Golf looks like… a Golf - hardly a surprise, and VW was never going to mess with a winning formula

Volkswagen has shown off initial design sketches for the new eighth generation of Golf. The new Golf has already had its launch delayed once – it was supposed to have been fully revealed by now, but VW decided to hold back the launch to give more publicity space for the new ID.3 electric hatchback, which starred at the recent Frankfurt motor show.

It is electric power that could come to define this generation of Golf, one way or another. Thus far, VW has not confirmed an all-electric version of this Golf, so there will be no immediate, direct, replacement for the current e-Golf. The electric arena is to be left entirely to the ID.3 and other cars using VW’s battery MEB chassis.

It will get two plugin-hybrid versions, once again badged GTE, which will have either 200hp or 240hp power outputs. It’s expected that the standard versions of the Golf will also incorporate a fuel-saving mild-hybrid system.

From the sketch shown, it’s clear that the eighth Golf looks like … a Golf – hardly a surprise, and VW was never going to mess with a winning formula. The wedge shape with the large rear c-pillar remains, but at the front there is a mild stylistic massage; the lights and grille looks a little similar to those of the ID.3, clearly an attempt to foster a family look.

The sketch of the interior shows a bigger change. There are fewer physical controls, and more functions have been added to a large touchscreen that – rather like that of the current Touareg – flows out from the digital instrument panel. It’s likely that this sketch is of a high-end model, with the largest possible screen, but even basic cars will have more digital functions than the current model.

The new Golf will be fully revealed on October 24th, and initial sales will start before the end of the year.

In the meantime, Volkswagen Ireland has announced an incentive programme to try to get Irish buyers to trade in older cars in favour of newer, supposedly cleaner models. Hijacking a little bit of government phraseology, VW Ireland is calling this a “climate action grant” and it will give buyers trading in older cars (ones that conform to Euro1-4 emissions regulations, effectively cars built before 2014) with a discount of between €1,750 and €5,000.

That least discount is taken off a Polo at trade-in time, while the largest amount is offered only on a Touareg. There is a significant €3,000 discount on both a Golf and an e-Golf, and VW has committed to scrapping, rather than reselling, all of the older cars traded in.

“Volkswagen recognises that climate change is one of the most significant challenges of our times. With transport accounting for 14 per cent of global CO2 emissions, it is imperative that we begin the reduction of emissions from vehicles on Irish roads,” said Volkswagen Ireland brand director Gerrit Heimberg.

“By replacing the existing one per cent additional VRT diesel surcharge and introducing a NOX emissions tax in the Budget 2020, the Government has sent a clear signal that not only fully electric and plug-in hybrid vehicles, but also the latest EU6 petrol and diesel models play a key role in achieving our climate targets. Our Volkswagen Climate Action Grant, with its scrappage element, enables customers to change into a new, cleaner model while ensuring that their older vehicle is removed from Irish roads. This results in a positive impact on our environment.”