Safety and environmental campaigners lining up against SUVs

German experts are calling for city-centre bans for 4x4s, while an IEA report says that they’re undoing efficiency gains 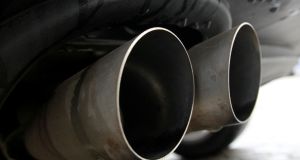 If you have become wedded to your SUV, it might be wise to prepare for a divorce, as both environmental and safety concerns are rapidly building against our current favourite vehicle types.

Even in a depressed and depressing year for Irish car sales, the official “Jeep/SUV H1” class of car (yes, it still rankles that Revenue uses the specific brand name of Jeep as a generic term) is still surging ahead. SUV sales have risen by 3.47 per cent so far this year in Ireland, against a backdrop of the overall market falling by 7.5 per cent. Out of 113,000 cars sold so far this year, 45,000 have been SUVs.

Given their ubiquity, many now consider an SUV to be a relatively blameless vehicle – after all, most of them are based around the same engines and chassis as more “conventional” vehicles, so why should they be any worse from an environmental or safety point of view?

The rapidly-emerging view is that they are worse – considerably worse – especially according to a new study from the International Energy Agency (IEA), a non-governmental body established in the wake of the 1970s oil crises to monitor energy use and wastage.

According to the study, the rise of SUVs as a popular body shape has effectively undone the good that carmakers have achieved in creating more frugal engines, and if sales continue as they are, SUVs’ popularity could undo the rise of the electric vehicle too.

According to the IEA’s report, the dramatic shift towards bigger and heavier cars has led to a doubling of the market share of SUVs over the last decade. As a result, there are now over 200 million SUVs around the world, up from about 35 million in 2010, accounting for 60 per cent of the increase in the global car fleet since 2010. About 40 per cent of annual car sales today are SUVs, compared with less than 20 per cent a decade ago.

“The impact of its rise on global emissions is nothing short of surprising” said the IEA’s report. “The global fleet of SUVs has seen its emissions growing by nearly 0.55 gigatonnes of CO2 during the last decade to roughly 0.7 gigatonnes of CO2. As a consequence, SUVs were the second-largest contributor to the increase in global CO2 emissions since 2010 after the power sector, but ahead of heavy industry – including iron and steel, cement, aluminium – as well as trucks and aviation.”

The IEA has calculated that an SUV will use about 25 per cent more energy than a lower-slung body shape with the same engine. That profligacy means that the growth of SUVs has wiped out, and then some, advances made in fuel efficiency since 2010. The IEA estimates that improvements in engine design and aerodynamics have saved about 2 million barrels per day of oil consumption. The rise of the SUV, it estimates, has cost 3.3 million barrels per day in the same time period.

Worse still, the damage could extend into the future. According to the IEA’s data, if SUV sales continue to expand at their current rate they will add an extra 2 million barrels per day of oil demand by 2040 – sufficient, it is claimed, to offset the benefit of up to 150 million electric cars sales in the same period.

Combined with that, there have been recent calls in Germany for a city-centre ban on SUVs on safety grounds. A recent fatal accident, involving a Porsche SUV, led to calls for such cars to be removed from areas where they might hit pedestrians. Data from the US also shows that pedestrian deaths have risen sharply in recent years, a rise which has been attributed both to increasing numbers of SUVs, as well as to driver distraction behind the wheel.

As for specific Irish plans, there is currently no official data to suggest that SUVs are more dangerous in an Irish context. The Irish Times contacted the Road Safety Authority for an Irish view on the subject of SUV safety, but our query was re-directed to the Department of Transport. The department responded with a simple “no comment”.

A ban on SUVs on safety grounds could be tricky. After all, SUVs have become so ubiquitous across so many different classes of car, that defining precisely what is an SUV and what is merely a taller hatchback could be more than difficult. On top of which, even large SUVs can be praised for their safety levels – Volvo’s XC90 was recently named by UK safety experts Thatcham as the safest car they’d ever tested.

On environmental grounds? That is a different matter. Our passion for all-things SUV is definitely driving up our vehicle emissions. Carbon emissions from cars in Ireland climbed for the first time in more than a decade in 2018. According to data from Cartell.ie average Co2 emissions from Irish cars rose to 113g/km.

That’s the first time emissions have risen since 2004, and much of the blame is being laid on the decline in popularity of diesel. John Byrne, general counsel at Cartell.ie, told The Irish Times: “Remember, we are looking exclusively at new cars sold in Ireland so any arguments with respect to imported vehicles can be entirely discounted. We considered whether the average emissions are possibly increasing in line with a buying trend towards purchase of more expensive vehicles, meaning these results are correlative with the general increase in the value of new vehicles sold.”