Don’t cry for your ancient diesel… 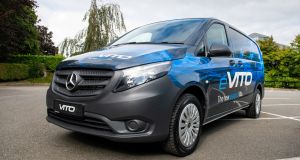 Those expecting this to be a panel-van version of Merc’s incoming 450km-ranged EQV MPV will be disappointed.

Delivery drivers cover a lot of ground every year - some 20,000-odd kms each every year. And, as anyone who’s tried to take a deep breath in when an uncared-for white van is passing by, many of them are noisy, smoky, polluting, and basically disgusting.

With online shopping on the rise, the flow of vans in various shades of white, yellow, and brown up and down my street is anecdotal evidence that something surely needs to be done. Clicking rather than shopping is more convenient, but it puts more vehicles on the road (arguably) and so the world’s van makers are rushing to provide electric alternatives to dirty old diesel, to make them more acceptable for city centres and suburban side streets.

One of the first to reach these shores is the Mercedes e-Vito (which I will, inevitably, be referring to as Evita from here on in). Evita looks like a conventional panel van, but underneath she’s very different. How different? Well, I’m about to find out - I’m taking a (totally fictional) shift as a delivery driver, taking the Evita for a spin around the environs of Dublin, dropping off (made up) packages to (equally made up) waiting consumers.

10am
The Evita is utterly normal to look at, but as I’m given the pre-drive induction tour, it’s apparent that she’s quite, quite different. Externally, the only visual difference is a higher ride height, to make room for the battery pack under the floor.

Those expecting this to be a panel-van version of Merc’s incoming 450km-ranged EQV MPV will be disappointed. The Evita uses a 41.4kWh battery which is, according to my calculations, much less than most new electric cars now. That grants it a 150km one-charge range, which sounds a bit pitiful.

It’s not the whole story, though. This is supposed to be a depot-based vehicle, not one that you charge while out and about (it won’t even accept a fast-charge) so the idea is to get it fully charged overnight, set off on your delivery route, and then drop it back that evening for a re-charge. Mercedes reckons that, potentially, when driving around town, and making the most use of the regenerative braking, you could squeeze that out to 190km, and even on the official figure it’s reckoned to be enough for two full days of deliveries for your average DHL driver.

10.30am
Initiation ceremony over, and we’ve loaded up the Evita for a day’s work. The good news for those looking at things such as payload and capacity that that the battery stack sits under the floor, so you have the same six cubic metre loadspace as the diesel version. While the Evita is a bit heavy (thanks to the batteries), it can still take a maximum cargo weight of one tonne, which is decent. Mostly, though, I’m just trying to resist the urge to shake these packages to see if any contain Lego.

11am
I am sad to report that there seems to be no Lego. Still, I’m on the road now, heading up the Long Mile to the M50, and then heading south towards the Firhouse turnoff. Around me swarm legions of white vans, all diesel, but no-one seems to pay much heed to my electric steed. Maybe they’re just not ready to admit that electric vans are a thing.

11.10am
Perhaps the apparent lack of enthusiasm amongst the van driving community is to do with performance. Diesel vans can be pretty sprightly if driven with vim. The Evita? Not so much. There are two versions - one with a limited top speed of 80km/h for in-town use, and this one, which is limited to 120km/h. Even without the limiter, performance is muted. I’m stabbing the button on the dash that switches between Comfort, Eco, and Eco+ modes but it seems to make littler difference to the performance on offer.

11.20am
At least the slow performance means that my pile of packages isn’t toppling over every time I accelerate, and the first few drop-offs go smoothly. If you need a van with which to deliver Waterford Crystal or Royal Doulton crockery, the slow and steady Evita is for you.

11.40am
We’re heading out towards the country now, behind Tallaght and in the general direction of Blessington. The Evita gets paddles behind the steering wheel, which alter the amount of regenerative braking that goes on. The lowest setting basically just lets the van coast when you back off the accelerator.

The strongest setting almost, almost, allows you to drive it on one pedal, using the electric motor to do most of your slowing down, hardly every touching the mechanical brakes. It’s effective, and it definitely adds a few km to your useable range. It does discourage tailgating though, which is surely the favoured sport of all delivery van drivers?

12pm
A few more deliveries done and it’s time for an early lunch. I’ve bought the traditional petrol station sandwich and crisps, and a cup of lava-hot coffee, but in deference to the Evita’s green credentials, I’ve popped a copy of The Ecologist in the windscreen, instead of a red-top tabloid. Mind you, the Phwoar, What A Scorcher headline remains basically the same.

I do manage to flick through a table that Mercedes has given me comparing the running costs of an Evita compared to a regular Vito diesel van. Now, there is a €23,000 price gap between a basic Vito diesel and the €49,200 Evita (enough to make me spit some red-hot coffee into my lap) but if you can get past that, the Evita’s savings start to add up. A €4,000 reduction in maintenance costs over four years is a bit of an eye-opener, as is the fact that “fuel” costs around 15c per kWh compared to €1.41 a litre for diesel.

Over four years of ownership, Mercedes estimates that you’ll spend €158 on charging, compared to €8,798 on diesel. Taking the long view, even with the inflated price tag, running an Evita is going to save your company money. Once the accountants get hold of that, the end result is all but inevitable…

1pm
Lunch over and I’m back on the road. The Evita’s languid acceleration remains, but otherwise it’s a pretty easy thing to drive. It gets around corners just fine, sits steadily on main roads and motorways, and thanks to a reversing camera is a doddle to slot into even tight parking spaces. It is surprisingly noisy, though. Even though the diesel rattle is absent, road and wind noise ensure that once you’re rolling, the cabin is still pretty hard on the ears.

Another thought - without the diesel engine to announce your presence, how many waiting consumers will miss deliveries because they didn’t realise you were coming up the drive? Perhaps some sort of ice-cream van chimes would be the answer ...

2pm
The range counter is ticking down now, but I’ve already reached Blessington, taken the back road to Naas and am now headed back to base along the N7. This is, clearly, not a long-haul vehicle and in electric car terms actually feels quite old-school. That’s fine, says Mercedes – this version of the Evita is all about “last-mile” delivery strategies. Picking up packages at depots and roaming around short-haul urban routes to drop them off.

Want more flexibility from your electric van? Be patient – a Sprinter with much bigger batteries, much more range, and fast-charging capability is on the way shortly, and a Vito version of the same will follow in due course. This short haul version is merely the first dip in the electric delivery waters by Mercedes. Mercedes Ireland will be, over the next few months, conducting trials with the likes of An Post and other big van fleet users, to see how well it fits their needs right now, and what they’ll need in the future.

2.30pm
I’m done with deliveries and back at base. Only a half-day shift, but what did you expect from a journalist? Real work? Having started with 83 per cent charge in the battery this morning, I’ve covered just over 70km and rolled back home with around 50km left in the battery, which isn’t bad. Enough for a day or more’s deliveries? Given the ease of use of the Evita, and the manner in which it can (apparently) save your company money, expect to start finding out for real pretty soon ...