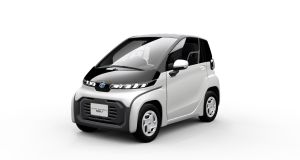 We might have expected Toyota’s first-ever all-electric production car to be a battery-filled version of some familiar model. A Corolla, perhaps. Maybe a RAV4. Nope, wrong on both counts. The Japanese giant’s first battery model is a two-seat ‘ultra-compact BEV.’

Don’t get excited just yet. Although Toyota has confirmed that this two-seat city car, due to be shown at the Tokyo motor show’s ‘Future Expo’ event, is production-ready, you can’t actually buy it. Nor, quite likely, will you ever be able to. It’s been designed to be leased as a vehicle for short, urban hops - a fact emphasised by its 100km range and 60km/h top speed.

Toyota has been gathering information, through its Yuko instant-rentals service (which has been trialled on the streets of Dublin and which is expanding its Irish fleet shortly) as to what customers want from a short-term hire car, and how they use it. The small (just 2.5-metres long) BEV is part of the answer. It’s designed to be ideal for those who’ve just passed their driving test, older drivers, and those needing cars for short business trips.

It’s not the only solution. Toyota will also show in Tokyo a small, glassy, autonomous pod-type vehicle, as well as the Toyota I-Road, a sort of gyro-stabilised electric scooter. These cars (if the I-Road can quite be called a car) are part of a strategy to provide zero-emissions vehicles for short journeys in major cities and other locations. They’re for businesses looking to provide employees with zero emissions transport for short work hops, or even for getting out of the office to take a break. They’re designed for security firms with large facilities to check, or for use in airports. They’re even designed to provide swift transport for wheelchair users, either in town or at major tourist attractions.

“We want to create a mobility solution that can support Japan’s ageing society and provide freedom of movement to people at all stages of life,” said Akihiro Yanaka, head of development. “With the Ultra-compact BEV, we are proud to offer customers a vehicle that not only allows for greater autonomy, but also requires less space, creates less noise and limits environmental impact.”

Toyota isn’t just working on these new concepts as standalone cars. The Japanese giant has also announced that it’s going to start working on batteries, and not just on building them. Toyota wants to understand better the entire life cycle of a vehicle battery, from construction through to recycling, finding new uses for old batteries, maximising the use of the battery, and minimising waste. This, the company hopes, will not only help to save money when it comes to making batteries, it will also help to defray criticism that batteries use rare metals (such as cobalt and lithium), the mining of which causes pollution, and raises questions over the use of child labour.

Meanwhile, Toyota will also use the Tokyo motor show to light an (environmentally-friendly) fire under the hydrogen car market with the second-generation Mirai. The original Mirai (whose name means future in Japanese), launched in 2014. Sold in tiny numbers, (around 10,000 worldwide) and only in markets where there is (hardly surprisingly) a hydrogen fuelling network, the original Mirai looked somewhat like an unfortunate collision between a Prius and a box of triangles. Pretty it was not.

The new Mirai concept car looks… gorgeous? OK, maybe gorgeous is over-selling it a little, but this is definitely an improvement on what went before, looking rather like a cross between a Lexus ES hybrid and a Kia Stinger sports saloon.

Inside, there’s a relatively simple, bluff, upright dashboard - one that’s much more conventional in its appearance than that of the current Mirai’s, and which comes with a huge central touchscreen.

More importantly, the new Mirai previews some major improvements to Toyota’s hydrogen fuel cell powertrain. A combination of a more efficient fuel cell, and a bigger hydrogen tank, means that Toyota claims this new system can go for roughly 30 per cent further on a fill-up than the current car. With some rough mathematics, that suggest a tank range of around 700km.

That figure needs to be put in context. The very best electric cars can reach around 600km on a full charge, but would take hours to inhale enough electricity into their batteries to do so. If Toyota’s claim is accurate, then the Mirai can travel slightly further, on zero emissions (the only emission from a hydrogen fuel cell is water vapour), and do so with refuelling times similar to that needed for a petrol or diesel car.

Yoshikazu Tanaka, the new Mirai’s chief engineer, said: “We have pursued the goal of making a car that customers will feel they want to drive all time, a car that has an emotional and attractive design and the kind of dynamic and responsive performance that can bring a smile to the driver’s face. I want customers to say ‘I chose the Mirai not just because it’s an fuel cell car, but because I simply wanted this car; it just happens to be an fuel cell car.’ We will continue our development work focusing on that feeling, and we hope that with the new Mirai we will be a leader in helping realise a hydrogen energy society.”

To make the new Mirai rather more engaging to drive than the first-generation model, Toyota has actually switched this one to rear-wheel drive, and even though it’s not yet an official production model, Toyota is already making claims for its “elegant driving feel.”

While hydrogen does not yet have much relevance for the Irish car market (we have no, literally zero, hydrogen fuelling stations) that could be about to change. Last week, Hydrogen Mobility Ireland (a group made up of representatives from car makers, fuel providers, transport industry, and the Government) issued a report that suggest Ireland could put 39,000 hydrogen fuelled vehicles on the road by 2030.