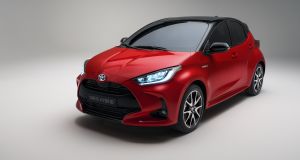 What does the billionaire boss of one of the world’s biggest car companies drive? Surprisingly, Akio Toyoda drives a Toyota Yaris.

At least that’s what the boss of the Japanese car giant claims, though the idea of a Akio driving himself to work every day, behind the wheel of a supermini in Tokyo traffic, is a bit hard to swallow.

Along with his well-earned corporate kudos, Toyoda is a well-regarded racing driver, and the man who drives the current company mantra of “no more boring cars”.

“Believe it or not, I’m also a Yaris driver,” he says during a presentation of the new fourth generation of Toyota’s crucial supermini.

“[A Yaris] is my everyday go-to car. As a master test driver I think it’s better to set my standards with smaller cars. It’s important to create a car that’s affordable, but also gives you peace of mind and feels great, that anyone would be proud to own. I’m very confident that we are very close to achieving this goal.”

The key message when it comes to the new Yaris is affordable. “If people think of it as affordable, that’s okay. But we don’t want our customers to think of it as cheap,” he says. “I want the driver to feel that what they are driving is cool and attractive. Our challenge was to achieve this feeling in an affordable way.”

The importance of Yaris to the Toyota brand cannot be ignored. Car buyers may seem to be fixated on SUVs and crossovers these days, but as Matthew Harrison, Toyota’s vice president for sales in Europe, explains one in five new cars sold today is a supermini.

Toyota hopes that revamped new styling, an impressively smart and spacious new cabin and an on-message hybrid version should be enough to win favour with Europe’s urban small car buyers.

So what’s new with the Yaris? For a start it’s built on a new architecture, part of a complete overhaul of the platforms across Toyota’s range. For the Yaris, it means its shorter than its rivals, but boasts a bigger wheelbase than the outgoing model.

It’s also far stiffer and more rigid, so you get far less body roll in the bends. The new platform also has a cross-beam element joining to the two front suspension struts, something normally associated with high performance cars.

Of course, that stiffness can have a trade-off in comfort, but Toyota engineers assure us that adjustments to the suspension set-up take car of this.

In design terms, it’s an evolution, but takes several cues from the likes of the C-HR, particularly in the lower angle of the rear c-pillar and the protruding rear light clusters. It’s a nice touch that adds character to the car.

Inside, the most notable trait is a surprisingly roomy cabin. The seating position is slightly lower than on the current car, and the steering wheel is more vertically angled than before. As for the controls, the touchscreen system of the new Corolla range makes its way into the new Yaris. The back seats hold the biggest surprise, with a surprising amount of legroom and headroom for a car in this class.

Toyota is making much of the safety traits of the new Yaris, building on the fact the model was the first car in its class to receive a five-star Euro-NCAP rating back in 2006.

A new safety addition for this generation is a pair of centre seat airbags, between driver and passenger to keep them hitting each other during a side impact. These will be standard issue on the new Yaris.

In Europe alone, Toyota has sold over 500,000 hybrid Yarises to date, and with dealers reporting enormous consumer interest in hybrid and electric models, it’s expected the hybrid format will make up 80 per cent of the new generation’s total sales. The remaining sales will be for the 1-litre petrol models, which will still be sold on the Irish market.

For the hybrid, a new lithium-ion battery - replacing the nickel-based battery used in current models - is matched to a new 1.5-litre three-cylinder petrol engine. This engine is derived from the impressive 2-litre unit that features in higher grades of the recently launched Corolla hybrid range.

The net result of the changes to the hybrid set-up that is 20 per cent more fuel efficient, with a batter pack that’s 27 per cent lighter and with a total output that’s 15 per cent greater than the outgoing hybrid model. Changes to the transmission also promises what engineers say will be a smoother transition between battery and engine power, without high-rev engine noise during acceleration, which is an annoying feature of many hybrids.

Of course, the real marker for this car will be its price, which we don’t have as yet. In the highly competitive market,

Akio Toyoda’s emphasis on affordable is the critical point, but first impressions suggest the new Yaris has the right mix of space, small stature and a petrol-electric hybrid format that’s all the rage, to lure Irish motorists.