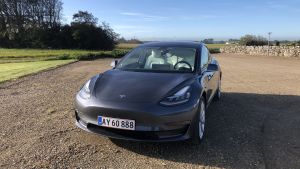 Tesla is the car brand for the Big Bang Theory generation. If Sheldon Cooper built a car, this Tesla would be it. What other car has a menu of fart noises to choose from, or the chance to change the indicator noise to a Christmas jingle? Tesla has whimsy.

The oddest thing about driving the new Tesla Model 3 is that nobody is looking. In the past, when we took a Tesla out on the public roads, it was like travelling with a film star. People pointed, photographed and stared. Three years ago, when I parked up a Model X at a recharging station, I needed to elbow my way through a crowd to get back into the car. You got that surge of eco-smugness over other drivers that Tesla owners must love. That eco-privilege seems to have evaporated in a puff of carbonless smoke.

These days no one bats an eyelid. That’s perhaps credit to the Tesla brand, but also a sign that it is part of the traffic now. Test driving in northern Europe in particular, where Tesla taxis are commonplace, the wow factor has worn off.

Which is useful when testing the new Model 3, for in Ireland, where the brand is still just taking root, Tesla still causes a surge of excitement.

I was really looking forward to spending a few days in this car. But after a few hours with it, and with the public more attracted to an Audi E-Tron parked alongside than my Tesla Model 3 test car, it was easy to get down to the business at hand. Time to close the fart menu.

That means it is coming in at less than a BMW 520i SE saloon or an entry-level Mercedes-Benz E-Class. In the world of Irish executive motoring, Tesla is no longer niche: it has finally arrived.

You get a choice of battery power options along with a choice of a single rear motor or a dual motor format, one on each axle.

The Model 3 starts with at €48,900 (inclusive of grants) for what’s billed as the standard-range version, which is rear-wheel drive. It has an official range of 409km and does 0-100km/h in a still impressive 5.6 seconds.

If range is your concern, then the long-range version, which comes in the dual-motor all-wheel drive format, is priced at €57,990 with a range of 560km between charges and a 0-100km/h time of 4.6 seconds. Finally there is the Performance version, which Tesla believes will sell well in Ireland. Priced at €61,990, its range is 530km but its 0-100km/h time is just 3.4 seconds.

You can see why several established premium rivals might be getting a little hot under the collar.

Several international colleagues argue the standard-range version feels too sedate, and is merely an entry model to get you a Tesla frame of mind. The performance version is good fun and, thanks to the battery under the floor, incredibly well-balanced as well, but for Irish buyers fixated on range, the so-called Long Range at €57,990 is the best option.

The acceleration is still impressively pacy, while the reassurance of that extra range in real-life driving offers the best balance. It also acts as a sort of future-proof against the hopefully rapid improvements in battery range during the lifetime of this car.

Inside the Model 3 is positively barren. The lack of a screen in front of the driver takes a little getting used to, with all information displayed on the 15-inch centre console touchscreeen. It controls everything from the wing mirrors to the flap on the rear plug socket. Just two toggle switches on the steering wheel let the driver control a limited number of features without turning to the screen.

In truth, you quickly get used to the menus and options and the clean lines are really refreshing, making all of Tesla’s rivals look cluttered in comparison.

Tesla also offers its Autopilot system for an additional €6,500, which is similar to the systems offered by rivals these days in that it will actively steering the car, though you do need to keep in contact with the wheel and play an active part occasionally.

For now it doesn’t recognise traffic lights or stop signs, so you have been warned. But Tesla promises it’s on the way and as with most of its systems, the upgrade will be offered for download to current owners once it’s available. That’s the future for tech options in cars.

Aside from these noticeable differences, the Tesla comes with with some nice comfort touches, like the 12-way powered front seats and the 14-speaker audio system, while the boot swallows 540 litres, enough for four sizeable golf bags.

So far, so impressive. Yet this Tesla is far from flawless. There is no doubt it’s fun, but it has got evident quality issues compared with its premium rivals. It’s the little things that niggle, like the low-grade plastics, the lack of effort that seemed to go into the seat design and the sometimes flimsy nature of other features. It takes away from the car’s wow factor. It’s the cabin that lets this car down the most.

On the positives, the Tesla Model 3 scores remarkably highly in consumer surveys, particularly in the United States. In colder climes, some complain about the speed of the heating system and demisters, but in the warmer climes of the US owners rave about the Model 3 to the likes of Consumer Reports.

I can only guess that part of its lure is that this Tesla can put it up to any of its rivals on a charge down a straight road. In both the single-motor and dual-motor formats the acceleration is fantastic. It also delivers on price, for now, as electric alternatives in the premium sector for €60,000 or so simply aren’t out there. It’s also remarkably agile, thanks to the low centre of gravity, which in fairness is a trait of every electric car these days. You long for corners in these cars.

The extra lure of the Model 3 is undoubtedly the character of the brand. The problem is that Tesla is now facing the challenge from premium grown-up brands.

Elon Musk’s frustration over the struggle to achieve consistent build quality for his cars has been well-reported, but you get a sense that it was both warranted and not quite achieved to date. Facing rivals with a century of experience on the production line, it’s hard to simply match their corporate knowledge and experience in the space of a few years. Tesla will get there, but they’re not there yet.

In the SUV crossover market, the Audi E-Tron is the real deal: electric, fun to drive and incredibly well built. Up against it, the Tesla Model X – with its gullwing doors – seems a little second rate. The Tesla Model S is a success because of its electric powertrain, but when Mercedes, Audi or BMW comes out with their rivals, it’s hard to see it winning favour unless it dramatically improves its fit and finish.

The Model 3 is a remarkable car for its pace, its agility and for what it stands for – the future of premium motoring. But those accolades only stand for so long as it doesn’t face a direct rival from a brand that can offer better build quality and a wider dealer and service network.

When the story of the electric car revolution is told, Elon Musk will be centre stage. While some take pot shots at his public persona, his volatile personality and his innovative approach to corporate finance, there is no doubting his impact on the auto industry. His equally impressive endeavours in space exploration, solar power and several other lesser-publicised ventures make everyone else seem like lazy layabouts.

It’s easy to love the Tesla. After all, who doesn’t want a glimmer of that innovative, disruptive light to shine on them.

And for all the stories of tough times on the production line, there is a real sense that Tesla doesn’t take itself too seriously, which infuriates the established brands. Tesla is jeans and T-shirt, while the establishment remains suited and booted. When they try to imitate Tesla’s whimsy it falls flat.

They shouldn’t bother. For their ace card over the US brand is that like the rest of the characters in Big Bang Theory, they all enjoy Sheldon Cooper’s quirky nature, but none of them wants to live with him for the long term.

Tesla’s tale to date has been remarkable and inspiring. It deserves all its accolades. But the next chapter in its story may be its most challenging: when the wow factor wears off and the rivals come, can it up its game as well? It will need to.

Verdict: Fun to drive and competitively priced, but how will it fare against premium rivals in the future? The jury is out