The German giant’s new electric vehicle arrives hot on the ID.3’s heels. Which is better? 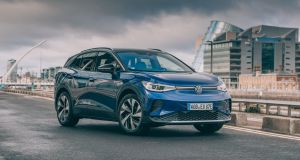 The Volkswagen ID.4 is better looking, and a little more substantial, than its ID.3 sibling

Volkswagen may have billed its ID.3 as the Beetle of the electric generation, but in reality it’s just one in a wave of new electric models coming our way. Next up in Irish showrooms is the larger ID.4, an iteration on the theme that’s slightly larger, able to tow and more spacious inside.

Some may bill it as a crossover, but in reality neither the new ID.4 nor the fleet of recently arrived fattened family hatchbacks bearing plugs sockets have any relationship to rough-and-tumble off-roaders.

For now you get a rear-wheel drive, but there will be four-wheel drive options in showrooms later.

This car has all the hallmarks of a funky-looking people carrier, without the added row of seats. Those with long enough memories will recall a funky Renault from 20 years ago, called the Vel Satis, which bore similar traits to the ID.4. In fact that forward-looking car could claim credit for the look of other models, such as the Skoda Enyaq or Jaguar I-Type.

Along with being a touch taller and longer by about the length of an average school ruler, the ID.4 buyer sits a bit taller than the ID.3 buyer.

Aside from that, the ID.4 is pretty much the same dish served on a slightly different plate. The car drives the same, the software works the same, the upholstery feels the same and the throttle response is mostly the same as the ID.3.

It’s true that aesthetically the ID.4 is a better-looking car, a little more substantial than its smaller electric hatchback sibling. And the higher seating position, that little bit extra legroom and the little interior touches, make it feel a more impressive car.

On Dublin roads it’s as balanced and poised as its sibling as well, with excellent ride and handling characteristics.

We’ve been won over by the ID.3, even during a Level-3 lockdown work trip, where we ended up criss-crossing the country and getting landed in a train station car park on a 22kW charger for over an hour waiting to get enough power to get home. So it’s not hard to see how we could come to be equally enamoured with its bigger brother.

Practically speaking, of course, you get extra load lugging ability with boot capacity of 543 litres compared to 385 litres in the ID.3, along with the ability to tow a 1,200kg trailer, or put 70kg in a roofbox.

Yet for that extra utility, there’s an added price to pay between these two new plug-in VWs.

Take the so-called 1st edition versions, the launch models for these cars. This ID.4 1st edition comes with the 77kW battery pack, delivering 500km range on a single charge, according to official WLTP stats. Starting price: €42,426 after all the grants and rebates are taken into account.

Back with the ID.3 and its first edition version had a 58kW battery pack, delivering 425km on a single charge. Starting price is €33,625. There are still 50 or so of these available here.

Fast forward a little to the post-launch entry-level models and we see that currently the ID.3 range starts at €32,157 for private buyers after all the grants and rebates (business buyers don’t get the same level of grants). This car has the 58kWh battery and a range of 425km.

Opt for the large 77kWh battery in either car and with the ID.3 you get a range of 542km with a price tag of €41,175, along with fast DC charging and a very high level of specification.

The bigger 77kW battery has benefits. For a start it lets you charge at 125kW on a DC rapid charger, so you could get 320km worth of power in just 30 minutes at one of the fast charging stations.

Volkswagen has promised to deliver a wide array of electric models in the coming years, but for now its latest addition is something of a modified edition, a tweaked body atop the same platform, coming to the market at a higher price. On first impressions, I’d still be opting for the ID.3.