Electric car revolution: How Ireland could lead the field

The island is almost perfect for EVs. But more drivers outside Dublin need to switch 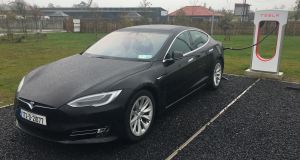 The recharging network in rural Ireland is still relatively patchy, even with the handful of super-fast charging stations like those of Tesla.

Ireland has long been held as a shining example for the potential of the electric car. We are a small island; we have partly national ownership of our electrical supply; our climate is mild, if a trifle damp; and there is no spine of alps running down the centre of the country over which we must climb. All of which suits an electric vehicle rather nicely.

Added to which, the distances between our major urban centres are modest. Dublin to Cork, the longest, is only 259km.

In which there lies an issue. Dublin is the centre of everything, the island leaning (almost physically) to the east coast in terms of population, employment and investment. At first that kind of worked for the electric car too – with the short ranges of early models, selling them to an urban audience was probably the best thing to do.

With the one-charge range of electric cars growing all the time, and a national imperative to switch to all-electric sales by 2030, those of us from the sticks had better get in gear

But with the one-charge range of electric cars growing all the time and, more importantly, a national imperative to switch to all-electric sales by 2030, those of us from the sticks had better get our electric buying in gear.

Last year was, of course, dreadful for car sales, but sales of electric cars actually rose both in real terms and as a proportion of the market. In fact, more than 4,000 found homes on Irish driveways in 2020. More than half were sold in Co Dublin, though – 2,016, to be exact.

For the rest of the nation, the electric pickings were pretty slim – Cork took 388, the commuter-belt county of Kildare 215, Meath and Wicklow 164 and 165, respectively, and Galway 130. No other county reached three figures.

Part of the problem is that much investment in electric-car infrastructure is based around averages, and the averages are skewed by the density of the Dublin metropolitan area.

The average distance of each journey taken in the State, according to the Central Statistics Office, is 13.7km. For Dublin it’s just 9.5km. For the rest of the country outside Dublin it’s 15.3km – and those journeys are at a higher average speed: 40km/h on average, compared with 23km/h in Dublin. That extra pace adds to the strain on an electric vehicle’s battery.

Those journeys in the country may well be longer. For example, in Dublin the number of people living more than 10km from their nearest GP’s surgery is 123. In Co Kerry it’s more than 14,000. In Co Cork it’s more than 19,000.

I started off in 2018 with an eGolf, so even a round trip from Carlow to Dublin was a struggle. In 2019 I picked up a Tesla Model X, and this was life-changing. I can charge it on a Monday and not have to charge again all week

Those figures imply that electric cars in rural areas will be living somewhat harder lives than their city equivalents. They will have to undertake more journeys, and longer ones, too, and will be farther from a charging point while doing so.

So we need to up our rural electric-vehicle game. Thankfully, that does seem to be happening.

“We expect most people to continue doing a majority of their charging at home, where it is the cheapest and most convenient to do so,” says Niall Hogan of ESB e-Cars. “We are already seeing a more ‘layered’ choice of EV charging options evolve, including charging at home, at work, at destinations such as supermarkets and hotels.

“Our national network of chargers complements these options, and we are now focusing on charging hubs to provide quick top-ups for longer distances and for those without off-street parking.

“Our focus in recent years has been on improving reliability across the network – we’ve replaced standard chargers in every county, with 186 replaced to date, while ensuring sufficient fast-charger coverage in areas where there were previous gaps. ESB has also been replacing standard AC chargers with DC fast chargers in towns around Ireland, to ensure that there is a sufficient spread of fast chargers.”

That spread is rapidly encompassing rural buyers, with new rapid-charging points in Sligo, Tullamore, Clonmel, Drogheda, Ballina, Clifden and Tralee, among other towns. Hogan also says that rapid-charging hubs will be considered in smaller towns and villages if a business case can be made. “Any forecasts on charger numbers depend on several factors. With the introduction of pay-to-use we now have a sustainable investment model which can match growth in EV numbers.” Some local councils are also looking at rolling out their own charging networks.

There aren’t enough public chargers – and there are none at all close to where I work. My anxiety around it would be forgetting to charge the car the night before a long trip. Being prepared for your journey length is important

What about people who are already using EVs out in the countryside beyond Dublin’s sprawl?

Paul Kelly is on the committee of the Irish Electric Vehicles Owners’ Association and so is clearly a ready convert. He lives in Co Carlow, and runs a Tesla Model X and a Hyundai Kona Electric.

“I started off with a 2018 Volkswagen eGolf, so even a round trip from Carlow to Dublin, which at the time I did 10 times a month back then, was a struggle,” he says.

“The M9 between Carlow and Dublin had nothing then, so I’d end up stopping at Tesco in Naas, whose charger was often blocked by a conventional car or in use, or Newlands Cross fast charger. Those days were painful.

“In 2019 I picked up a Tesla Model X P100D, and this was life-changing. I can charge on a Monday and not have to charge again all week. If there were 100,000 EVs on the road in the morning the network we have today wouldn’t suffice. However, newer EVs have more range, so fewer people are relying on it.”

Certainly, people do seem to be buying into the idea of charging at home most of the time (those people with driveways and off-street parking, which in fairness is more likely in country than in the city).

Louise Fleming lives in Cork and drives a Kia e-Niro, which has a range of about 420km on a full charge. “The last longest journey I did was to Dublin and back. I stopped off on the way up, just outside Dublin, to charge for about 45 minutes and did similar on the way back down. Now that the weather is cold I usually charge it up the night before, regardless of my range, so I can have a preheated car and defrosted window in the morning,” she says.

I do have a nagging worry that, as EVs becomes more mainstream, will people adopt EV etiquette and be considerate? Will they only charge how much they need to?

“There aren’t enough public chargers – and there are none at all close to where I work. My anxiety around it would be forgetting to charge it the night before a long trip. Being prepared for your journey length is important.”

James Woodward, who is based in Sligo, recently bought a Volkswagen ID.3, and his concern as EV sales rise is not merely the number of chargers but also the people who will now be using them. “Whilst I’m really happy that people are moving to EVs I’m concerned that infrastructure won’t keep up and it might involve long waits to even be able to start charging,” he says.

“I don’t think range is the be-all and end-all that a lot of people make it out to be. It’s rarely that you drive more than 300km without the need to stop. I do have a nagging worry that as EVs becomes more mainstream – and it’s been quite an early-adopter thing up to now – will people adopt EV etiquette and be considerate? For example, will they only charge how much they need to? Will they park in a charging space without charging just because they have an EV? And will they move off the charger when they have finished charging?”

As electric cars’ ranges grow, and as prices come down and the secondhand market expands, rural use and ownership will grow. We just have to make sure that urban areas, Dublin especially, don’t vacuum up all of the EV investment at the expense of those of us with a little more sky and grass around us.