With this SUV's big-six diesel engine, the old oil-burning technology is going out on a high 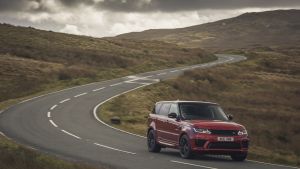 You do start to wonder whether Land Rover ought to start selling an optional paper bag – with precisely located bespoke eyeholes – with each Range Rover that it sells. Surely, being seen driving something as obviously profligate as this new Range Rover Sport D350 now verges on the socially unacceptable?

Forget the arguments about how much damage lithium mining for batteries does to the environment, forget how few Land Rovers, and especially Range Rovers, are sold each year compared with the millions and millions of supposedly saintly smaller vehicles. Optics are everything. Something that’s the size of a sideways tower block, and fuelled by the devil’s juice (or, as we used to call it, diesel), is going to draw eyes of ire from every denizen of the pavement.

Which is a pity. Land Rover is moving in the right direction. It now offers a plug-in-hybrid variant of almost everything it sells (the new Defender being the only hold-out, and a PHEV version of that is imminent) and fully electric vehicles are in the works. Even this Range Rover Sport – fully dressed in ‘Firenze Red’ for the ultimate in pantomime climate villainy – is now at least partially electric.

That’s because its new 3.0-litre straight-six diesel engine (badged D350 because it develops 350hp, along with a whopping 700Nm of torque) does use a 48V mild-hybrid system. This, using a compact battery and a beefed-up starter motor, can more energetically use the stop-start system when crawling in traffic, and can feed in a little extra torque when accelerating hard, helping to save a little fuel.

It’s an incremental saving, to be sure, but as the well-known supermarket campaign points out, every little helps. A shame, though, that Land Rover didn’t include engine-off coasting at high motorway speeds, which most of its competitors now offer.

This big-six is likely to be one of the last all-new diesel engines that Land Rover will develop – and, by heck, the old oil-burning technology is going out on a high.

It meets the latest, and incredibly tough, RDE2 (Real-world Driving Experience) emissions tests (which govern, in particular, its emissions of harmful nitrogen oxide, or NOx) and, says Land Rover, is capable of averaging 9.2 litres per 100km in fuel economy.

Which is rubbish. Usually such claims are rubbish in the wrong direction, by which we mean that, in the real world, the car will be much, much thirstier than claimed. The big Range Rover Sport, by odd contrast, proved to be much, much more frugal than claimed, and indeed than we expected.

In fact, over a two-hour journey that mixed country roads, motorways and urban streets (plus, and this doubtless helped, a lengthy stretch of roadworks that kept us pegged to a stately 80km/h) we managed to average 7.0 litres per 100km, or 40mpg for those still viewing this in black and white.

That’s maybe not the most ground-breaking fuel economy ever, but it’s impressive for something as hefty as this, and proof that big, unstressed engines can be hugely economical if you drive them right.

The rest of the driving experience is exactly as you’d expect. The Range Rover Sport is incredibly comfortable and cosseting. You sit, perched up high, on suede-wrapped armchairs, watching the world roll silently past in the widescreen view out the front.

That big straight-six is all but inaudible unless you press your foot right to the base threads of the deep-pile carpet, and then, to be frank, it could do with being a bit more noisy, of having a touch more aural drama. Handling is very good, considering the 2.3-tonne kerb weight, and there’s surprising feel and response from the big steering wheel.

Cabin quality is something that Land Rover has clearly been working very hard on (keen, no doubt, to exorcise its long-held reputation for shonkiness), and the interior feels deeply impressive to the touch. It’s not quite so impressive to the eye – the pared-back cabin styling, borrowed from the small Evoque, doesn’t work quite so well at this price level, and it also lacks the richness and baroque elements of the bigger, ‘proper’ Range Rover.

Indeed, it’s the big Range Rover that’s the problem here. Assuming you can park your environmental conscience for a moment, the Range Rover Sport is a vehicle with immense appeal.

It’s so comfortable that cross-continent grand tours would whisk by in an apparent moment, and it’s surprisingly capable when the road turns twisty. It’s also, of course, ridiculously capable when the road runs out entirely, to a point where surely no owner would ever actually experience the true breadths of its abilities. It’s rather like one of those XXL Swiss army knives, with more blades than you know what to do with, and a lemon zester.

All of which is equally true for the big, ‘full-fat’ Range Rover, into which Land Rover has also just dropped this new straight-six engine. The big Rangie is rather less precise to drive in the corners, and on optional 21-inch alloys its ride does suffer more than the Sport’s. It’s the one you actually want, though.

The comparison is that the Range Rover Sport is the car in which you would drive to a posh hotel. The hotel owner, however, will drive the bigger Range Rover. It is more patrician than the Sport, with less of the whiff of the Premiership footballer about it, and is effortlessly classy. In the Sport you can sense the slight scramble up the greasy pole of polite society. The Sport, in this ritzy HST trim, is also so expensive that it’s hard to see why you wouldn’t just upgrade to the bigger car.

Both are, indubitably, excellent – at least in the sort of isolation that doesn’t take their poor environmental performance into account. It’s also worth noting that all-new versions of both are imminent, and will come with even cleaner powertrains, upgraded interiors, and more modern infotainment systems.

Still, if you can stomach the price, and the €2,400 annual motor-tax bill, and fancy a truly impressive last slice of the diesel engineer’s art, the Range Rover Sport is hard to beat. Until, of course, you remember the Range Rover.