Confused about electric vehicles? Here’s how to tell your EV from your PHEV and MHEV 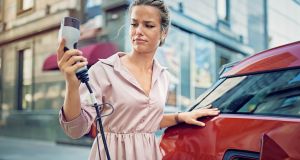 Some 70 per cent of people are keen on the idea of buying a hybrid or electric car, according to a recent survey. Photograph: iStock

You’re not alone. A great many of us – some 70 per cent, according to a recent survey, are keen on the idea of buying a hybrid or electric car for our next set of wheels but there’s still some confusion over precisely what kind of car does what kind of job. What, precisely, is the difference between a hybrid, a plug-in-hybrid, and a fully electric car?

Okay, so a hybrid charges itself, right?

Ah, you’ve been paying attention to advertising, haven’t you? While both Toyota and Kia advertise their hybrid cars as being “self-charging” that’s a bit of a misnomer. First, let’s explain what a hybrid car actually is.

It’s a car with two engines, isn’t it?

Sort of. Hybrids use an internal combustion engine, usually a petrol one, and usually running on the Atkinson combustion cycle. No need to go into the finicky tech details of that, it’s basically just a way of making an engine more economical in the way it runs. The downside to that is that running on the Atkinson cycle reduces the power output. So, there’s also an electric motor, powered by a small battery (usually of less than 2kWh, or kilowatt-hour, capacity) which boosts the engine’s power, and also allows a little electric-only running.

How much electric running?

Well, it depends on how and where you drive, but according to a study by UCD (in which Toyota was involved, but only to the point of loaning the study a few hybrid cars) a hybrid can potentially spend as much as 70 per cent of a given journey running on electric power, with the engine switched off. Generally speaking, around town, a good modern hybrid should return fuel economy figures of around 4.7-litres per 100km (60mpg) but a bit less on the motorway, when the engine is working harder.

So a hybrid is a 70 per cent electric car?

Not quite. All of the charge for the battery, aside from a tiny bit gained from brake energy recovery (like the dynamo powering the light on an old bicycle) comes from the petrol engine, so while the battery of a conventional hybrid is charged by the car, without needing to plug it in, calling it “self-charging” is a little bit cheeky. Mind you, it’s a phrase we all use now, so it’s worked, from a marketing perspective, hasn’t it?

So what’s a plug-in-hybrid then?

A plug-in-hybrid is often referred to as a PHEV, or Plug-in-Hybrid Electric Vehicle. Basically, a PHEV is a hybrid with a much bigger battery and a socket. The idea is that you can plug them into the mains, or a public charging point, and charge up their battery (the most common ones have batteries with around 13kWh capacity). Fully charged, these PHEVs can be driven for a certain mileage (the official claim for most models is around 50km) on electric power alone. The idea is that you can do your day-to-day driving – shopping, work, and school runs – on battery power, with zero local emissions, but you still have a petrol or diesel engine and a tank of fuel if you want to go on a longer journey.

Well . . . yes, but also no. The thing is that the bigger battery weighs a lot, which means that when you’re driving with that battery run flat, you’re effectively driving a normal hybrid, but one carrying an extra couple of hundred kilos of weight. That blunts fuel economy, which is okay if you’re just doing the odd long journey, but to get the best from a PHEV you have to be prepared to plug it in and charge it up as much as you possibly can – like an old iPhone. If you don’t, they can actually end up being less fuel efficient than a normal, non-plug-in hybrid, or even a conventional petrol or diesel car.

Maybe you should. Electric cars have improved out of all recognition from the first models that hit the market a decade ago. They’re still pricier than a conventional car, or even a hybrid, but charging times are coming down, rapid public charging points are improving, and one-charge ranges are going up. Even the cheapest electric car (sometimes called and EV, or electric vehicle) currently on sale – the €26,495 Renault Zoe – can hit a claimed 395km between charges.

How does an electric vehicle work?

Couldn’t be simpler – they use an electric motor (the same basic tech as a kitchen mixer, but bigger, obviously) which gets its power from a battery. A 50kWh battery is fast becoming the most common type, and that’s good enough to give small cars such as that Renault Zoe, or the Peugeot e-208, or the Opel Corsa-e, a range of between 350-400km on one charge. The latest Nissan Leaf goes for between 275km and 385km, depending on which model you choose, while Volkswagen’s new ID.3, the Kia e-Niro, and the Hyundai Kona Electric will do 420km.

Will they really go that far?

Again, it depends how and where you drive. If you’re mostly driving in town, then you might just hit the official figures. Drive on the motorway a lot, and that’s going to hurt the range (higher speeds, and less chance to top the battery up from the brakes) but even so, most cars will now do the run between Dublin and Belfast without stopping, or Dublin and Cork with at most one short stop for a top-up.

If you’re buying an electric car (or a PHEV for that matter) you really need to have a driveway or some other form of off-street parking, so that you can get a charging box fitted to your house (they cost around €900-€1,000, but you can get a €600 grant for installing one) and charge overnight. As long as you can do that, you should be fine for all but the longest journeys. Public charging points are getting better (even if reliability of those points isn’t what it should be). The old, original, ESB fast chargers work at 50kW speeds, and will top you up reasonably quickly, but you’ll be waiting a while. There are faster 150kW stations now coming online, which are better, but the gold-standard right now are the IONITY 350kW stations (there are currently five – Cashel, Athlone, Kill, near Naas, Gorey, and City North, near Balbriggan), which will charge up all but the largest batteries in barely longer than it will take you to eat a sandwich and drink a coffee. If you buy a Tesla, you’ll also get access to Tesla’s own-brand chargers, which are just as quick as IONITY’s.

Will my battery last, though?

Yes, it actually will. You know the battery in your phone, and in your laptop? Well the ones in cars use the same basic chemistry, so you just need to apply the same charging habits. It’s best to use rapid chargers to top up to around 80 per cent charge, and then do a long, full charge from a slower home wallbox. Stick to that rule and your battery should last just fine – most new electric cars get a seven or eight year battery warranty anyway. The batteries will wear a bit over time, of course, but as long as you’re not rapid-charging every day, it should be fine.

What about range anxiety?

It’s going away. As longer-range cars hit the market, and as more rapid chargers open up, it will go away completely. Range anxiety is really something most felt when you’re new to electric cars. Once you get used to your car, your battery, and your usable range, you’ll actually kind of forget about it. Longer journeys can take a little more planning, but once you get into that, it’s pretty easy – as long as the public chargers are working and you can charge at your destination, of course . . .

Mild hybrids are basically normal petrol or diesel cars that have a small battery and a two-way alternator called a starter-generator. A good example is the new Ford Puma – that uses a 1.0-litre turbo petrol engine, and that’s what drives the car. It is a mild-hybrid (or MHEV) but the electric bits never actually drive the car on their own. Basically, a mild-hybrid means that the car has a beefed-up stop-start system, so it can save a little more fuel around town, and they can usually coast, engine off, for short bursts on the motorway. They help save a little bit of fuel, but they drive just like a “normal” car and you won’t really notice the electric bit.