The GR010 Hybrid will take part in the endurance race in June, coronavirus allowing 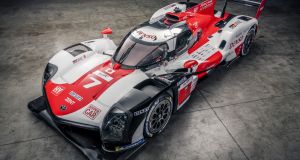 Toyota’s new GR010 will be blooded for the first time at the legendary Sebring race track in Florida, for the 1,000km race there on March 19th. Photograph: Volmeyer.com

Toyota, having dominated a somewhat depleted Le Mans for the past three years on the bounce, could have been forgiven for ending its all-day-and-all-night motor sport commitments, and retiring to pick out some spacious trophy cabinets.

The new rules at Le Mans, which will also be enforced for the global World Endurance Championship (WEC), and the American Daytona series, have outlawed the insanely complex, 1,000hp hybrid race cars into which Toyota has invested so much time and energy since 2010.

However, Toyota’s not for turning, or words to that effect. Instead of retreating, Toyota is doubling-down on a brand-new car for Le Mans and the WEC.

Dubbed the Hypercar class, the new rules for the top-speed cars in the famed French race have been written to try to encourage carmakers to either modify their road-going high-performance models for racing; or to add road-car styling to a dedicated racing car.

Toyota is going at things a little differently, as has been the company’s wont for some time. In fact, Toyota is essentially dipping into the Porsche playbook (perhaps unsurprising, given that Porsche has won the 24hrs a record 19 times). Back in the 1990s, to sidestep a restrictive rule book, Porsche turned a dedicated racing car into a road-going supercar, and then turned that back into a proper racing car.

Toyota’s new GR010 Hybrid (GR standing for Gazoo Racing, Toyota’s in-house tuning and racing arm, its version of Mercedes AMG, or BMW M, or Ford RS) is kind of a development of the three-time Le Mans-winning TS hybrid race car series. Certainly, the overall body shape seems familiar, but under the skin there have been dramatic changes.

“There have been many differences and challenges to address during development,” said Toyota’s racing technical director, Pascal Vasselon. “So it has been an interesting engineering challenge. The only parts we have been able to carry over are generic parts, such as connectors and sensors. Now we are all looking forward to continuing our testing programme and finally seeing our new car compete; I think it will be worth the wait.”

The powerplant is all new. A 3.5-litre V6 twin-turbo petrol engine sits in the middle of the car and rives the rear wheels, while the front axle is driven by a hybrid electric motor, driven by a compact battery stack. The engine develops 680hp, while the electric motor develops 272hp, but the GR010 Hybrid will not develop a conjoined 952hp.

Well, it might be able to, but the rules say a firm, French “non” – the new Hypercar class at Le Mans is pegged to a maximum of 680hp at any one time. The Toyota’s on-board computer will have to carefully juggle the output of both engine and electric motor to make sure that no more is used than allowed. The famously strict Le Mans scrutineers will be watching carefully.

The car is, in some ways, simpler than its predecessor, which used two hybrid electric motors (one at each end) and was an out-and-out racer, and even used a super-sophisticated suspension system to keep the body level and the aerodynamics working at peak performance. That has now been outlawed and this new GR010 is, technically at least, road-car based. Toyota will build a limited-run of road-going models, called the Toyota GR Super Sport. It’s likely that, freed of the constrictions of the rules, the road-going car will be more powerful, maybe even deploying that full 952hp.

The new rules were designed, with much wrangling and back-and-forth changes, to both improve the car-to-car racing but also to entice big carmakers back to the grid with lower budgets. Having had, at one point, Audi, Porsche, Toyota, Peugeot, and a smattering of independents racing at the top level, Le Mans had suffered an exodus, leaving Toyota as the only “works” team, racing against a depleted grid.

The new rules have clearly worked – in 2021, Toyota will face off against top-line teams from the American Glickenhaus squad (funded by race-loving billionaire film producer and finance whizz Jim Glickenhaus) and Renault-owned Alpine. By 2023, new teams and brand new cars from Peugeot, Audi and Porsche will return to the grid, and there is still the faint possibility of a semi-independent Aston Martin squad using the Valkyrie hypercar co-developed with Red Bull.

The teams should certainly be closer on outright performance, with the Le Mans and WEC organisers restricting the weight of the cars (Toyota’s new GR010 is 162kg heavier than its predecessor, the TS050); restricting power (down by about 32 per cent); and critically restricting aerodynamics – the cars will have to race with one basic body and wing setup at all circuits, whether that’s at a high-downforce track such as Fuji in Japan, or at Le Mans itself, which requires ultra-slippery, low-drag wings. Finding the right balance between those demands will be key, above all else, to winning.

Having been delayed to September last year, and run without any fans at the trackside, Le Mans has returned to a more traditional June date (12th and 13th) this year, coronavirus allowing. Before that, the GR010 should be blooded for the first time at the legendary Sebring race track in Florida, for the 1,000km race there on March 19th (again, coronavirus allowing).

How much difference does all of this make to an average Toyota buyer? Probably not much. Someone walking into a Toyota dealer in Clonmel (or clicking on that dealer’s new virtual showroom) probably isn’t thinking much about how fast the new Toyota is going down the Mulsanne straight. That said, the glamour and excitement of Le Mans certainly rubs off on enthusiasts, and there is no one more enthusiastic about racing than Toyota’s president, Akio Toyoda.

His love of sharp-handling, sharp-looking cars has transformed the Toyota lineup, both critically and stylistically, and that has certainly made a difference to the average buyer – the Toyota that they’re buying is now far more sophisticated, and has better on-road handling, than ever, even if they may not notice it.

Vasselon is in no doubt, saying: “The new regulations are designed to showcase road-relevant technology in WEC whilst also delivering a top-level, attractive spectacle. We are looking forward to welcoming new competitors and being part of an exciting future for endurance racing.”

For those of us of a car-nut bent, the magic pixie dust of seeing ultra-rapid cars blasting through the night at Le Mans is all we need.