You expect major tech advances when you buy a Merc. But a Hyundai? Hats off 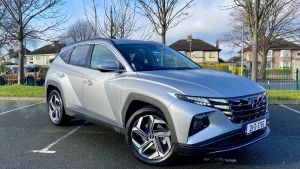 As we hop in and out of new cars in this job (I know, tough life), we tend to regard the arrival of new technology as incremental. So every now and then it’s worth taking the chance to consider how quickly things have changed in the past few years.

Anyone trading up from the current Tucson will regard it as a landmark leap, not just in their motoring but for the brand itself. And they’d be right.

You expect major tech advances when you buy the latest Merc. But a Hyundai? We’re long enough on this earth to recall the age of the Hyundai Accent. This new Tucson bears as much comparison to it as I do to Lewis Hamilton.

For the Korean brand, this arrival is a game-changer, the bookmark for when it truly showed itself ready to go wheel to wheel against the auto industry’s old guard, without having to play any discount card.

This new crossover captures just how far Hyundai has come in seven years. Well priced, the outgoing Tucson was a runaway sales success since its launch in 2016. And it was a handsome affair, with a big boot and spacious back seat. You got a lot of car for your cash. But it wasn’t much fun to drive.

That’s all changed with this car. Every facet of the Tucson has been improved.

Take the exterior: the current model was smart but far from stylish. No one gave it a second glance. In contrast this new Tucson turns heads.

Some may find its creases and sharper lines a little too bold, but the sales charts suggest even conservative Irish car-buyers are looking for more styling from crossovers than the usual formulaic four-wheel box.

This trend was started by the likes of Peugeot and models like the Toyota C-HR. Now Hyundai has joined the crossover style council, and done so with aplomb.

Inside, the cabin puts many of its mainstream Japanese rivals to shame. There are some lovely touches, like the cloth trim that runs across the dash, and the in-car lighting that’s reminiscent of several premium cars at twice the price.

There was a time when Hyundais were fitted with fiddly Pioneer stereos with control buttons about the size of a gnat’s wing. Now, as well as a 10.25in digital display for the driver, you get another sizeable touchscreen in the central console. Meanwhile, buttons are retained for frequently used features like air-con.

The Tucson cabin exemplifies a practical application of new tech. Rivals take note. That said, on the final day of testing the main screen went blank and various attempts to revive it were unsuccessful. Even the savy Koreans can struggle with the trials and tribulations of tech.

This issue aside, we are impressed with this car’s styling, fit and finish. But there is more. The current Tucson delivered on practicality and price while looking as smart as all the rest of these cars, but behind the wheel it was competent but not commendable.

Hyundai has addressed that. The steering is the sharpest and most engaging we’ve come across in any car carrying this badge to date.

Could this be the work of Albert Biermann? Hyundai poached one of BMW’s most respected engineers, who steered the German brand’s M Division through a golden era.

Biermann’s influence and expertise have dramatically improved the driving dynamics on recent arrivals from Hyundai and its sister brand, Kia. His increasing role at the car group and the Tucson’s dramatic improvement in driving pleasure have to be more than just a coincidence. It’s as if he finally revealed to the Koreans the benefits of linking the steering wheel to the front wheels.

The new Tucson feels composed and sure-footed, delivering a direct steering feel that would be a credit to any German premium brand. So kudos to Biermann and his team.

We’re not for a moment suggesting this is a racy crossover, but, considering it is up against rival hybrid powertrains, it’s at the top of its game. True, it leans quite heavily on the 1.6-litre petrol engine to get you off the starting blocks. But what impresses most is the fact the engine rarely hits the high whining notes of some hybrids.

Combined with its 44.2kW electric motor, the power is smooth and the noise rarely excessive unless you absolutely bury your right foot to the floor. Even then, it’s not the sewing-machine whine that we loathed on early hybrid cars. Putting out a very respectable 230bhp, in eco mode it’s quite nippy, while there’s a noticeable pep when sport mode is engaged.

Opting for the hybrid version over the diesel variant also gets you Hyundai’s new auto transmission with a cabin layout where buttons replace the traditional gear lever. For modern motoring it makes complete sense.

The reasons for a gear-stick format in automatics has long disappeared into the annals of motoring history. But it’s not just about the cabin aesthetics: this transmission is remarkably smooth. And it’s intelligent enough to realise when you’re cruising along, so the most of the battery’s fuel-saving ability can come into play.

The Tucson is a two-wheel-drive crossover, forgoing any pretensions to rough and tumble off-road capabilities. This is firmly in the school-run-and-shopping segment of the car market. So there is enough space in the rear of the cabin and in the boot for most family duties.

In terms of fuel economy, the hybrid does well in slower urban driving, but we did find it was clocking in at close to 8l/100km (35mpg) during our time with the car.

Hyundai claims an official WLTP fuel economy of between 5.5l and 6l/100km depending on your wheel choice, and that seems perfectly achievable, for the average owner will not be testing the acceleration and response times like we were during our time with the car.

On the wheel choice, our top-of-the-range test car was shod with 19in alloys. They really suit the new styling, but the 18in versions look equally sharp and would probably offer a softer ride.

That is our one minor gripe about the car: in return for much better driving dynamics, the ride can be a little hard on bumpy roads, a little firm for some family tastes. But it’s certainly not something that would deter us from recommending this car.

If you do big mileage then there remains an argument for diesel perhaps, and the €3,500 difference is a leap for many family buyers. However, judging by the direction that consumer winds are blowing – and what used-car buyers may be looking for in four years when it comes time to sell – I’d think the hybrid is the wiser option. You may also consider the plug-in hybrid version, expected to arrive on the market later this year.

If you are going to treat yourself to a bit more tech and spec, then you might as well go for the top Executive Plus grade, as the midrange seems a wasted effort.

The Tucson’s list of rivals is relatively long, given the current crossover craze, but it has an answer to all of them. Its pricing is competitive, it’s big enough for the average family, measuring in alongside the likes of the Skoda Kodiaq and even the Toyota Rav4, and in terms of driving dynamics it’s a match for the much-praised Ford Kuga and Seat Ateca.

Throw in the five-year unlimited-mileage warranty and you can see how Hyundai arguably has the edge.

The initial talking points about the new Tucson may be the impressive in-car tech and the smart new styling. But once the novelty of these features wear off, the real star quality of this car remains: it’s the best mainstream Hyundai model we’ve ever driven.