Israeli manufacturer says battery will end range anxiety. Is this the big breakthrough? 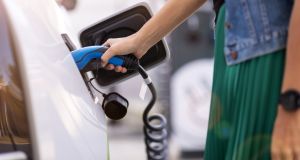 StoreDot claims it can now produce batteries that can be charged in as little as five minutes. Photograph: iStock

Israeli electric car battery manufacturer StoreDot claims it can now produce batteries that can be charged in as little as five minutes, assuming that you can find a rapid enough charging source.

Better still, the company claims this is not a mere laboratory-bench process, but one that can be applied to factory-produced batteries and can potentially be in service on the roads within a couple of years.

In what could be a breakthrough for the growth in electric car sales, StoreDot chief executive Doron Myersdorf says that his company has made 1,000 demonstrator battery packs, and that these are now being distributed to potential clients.

One of those is Daimler-Benz, the parent company of Mercedes-Benz, which has invested in StoreDot.

Speaking to the Guardian, Myersdorf said: “The number one barrier to the adoption of electric vehicles is no longer cost, it is range anxiety. You’re either afraid that you’re going to get stuck on the highway or you’re going to need to sit in a charging station for two hours. But if the experience of the driver is exactly like fuelling a petrol car, this whole anxiety goes away.”

StoreDot’s tech, apparently, replaces the graphite that’s usually used for the anode and cathode of a battery (the positive and negative poles) with a semi-conductor material.

This means that power can flow more rapidly into the battery, without causing damage to the materials or triggering damaging short circuits.

While StoreDot hasn’t said what kind of charging speed is necessary for that five-minute top-up, it does say that with existing rapid-charge tech, at speeds of up to 350kW, charging times could be cut to as little as 10 minutes – barely longer than it takes to pump and pay for liquid fuels.

Such rapid-charge batteries will undoubtedly be more expensive than existing packs, and while Myersdorf is confident of a 2025 rollout to the public, it’s likely that, initially at least, they will be reserved for more expensive, or high-performance, models.

The virtuous circle of rapid charging is expected to spread quickly, though. The cost of such technology should, it’s hoped, fall rapidly as major manufacturers scramble to expand production. The benefits could be manifest – not only would such batteries open up electric car ownership to far more consumers, they would also mean there would be less need for massive networks of public chargers, simply because each charger could turn over more cars in a given day.

Equally, cars could be built with smaller, lighter, shorter-range batteries, which would be more efficient overall, and cause less environmental damage in their construction.

There are other improvements in battery tech in the pipeline. In a paper published in scientific journal Nature, Chinese researchers – Xiao-Guang Yang, Teng Liu and Chao-Yang Wang – claim that thermal conditioning of a battery (raising its core temperature to 60 degrees and holding it there), could dramatically improve battery longevity and performance.

According to the paper, a battery “designed to operate at a working temperature of about 60 degrees any ambient condition promises to be a well-rounded powertrain for mass-market EVs. Furthermore, the limited working time at the high temperature presents an opportunity to use graphite of low surface areas, thereby prospectively prolonging the EV lifespan to greater than two million miles.”

The final breakthrough yet to come may well be so-called solid-state batteries. Toyota claims that it has finally got the knack of making solid-state batteries for cars and intends to have the technology on sale by 2025. If that turns out to be true, it could dramatically leapfrog Toyota from something of a laggard in electric vehicle (EV) terms to potential market leader.

What is a solid-state battery? Well, the clue’s in the name – modern lithium ion batteries suspend their cells in a liquid electrolyte, which helps the electrically charged particles move through the battery, but has its shortcomings. Mostly, that liquid heats up as the battery charges and is used, and requires careful cooling to work efficiently, and to avoid catastrophic “thermal runaway” – what happens when a battery overheats and catches fire.

Toyota’s senior battery engineer, Keiji Kaita, told Automotive News that the prototype batteries the company has been working on charge in just that amount of time, but he didn’t elaborate on what kind of power capacity the batteries had.

Clearly, though, with such short recharging times, an EV with a solid-state battery would be able to do without a big, heavy, long-range battery because it could be topped up so much more easily.

Toyota had been due to show off its solid-state battery tech in a series of autonomous shuttle buses, built for the now-cancelled 2020 Tokyo Olympic games. Even with that disappointment, Kaita says the company is on course to put solid-state tech on sale within five years.

As with other rapid-charge battery tech, at first cars using solid-state batteries will be very expensive. It’s possible that, as with the original Prius and the first-generation Mirai hydrogen car, we could see Toyota subsidise the prices of such cars, accepting a loss-leader status in order to get the technology out on the road, much as it did with the first-generation Prius in the late 1990s.

Currently, the batteries have to be built in an “ultra-dry, nonaqueous environment” by specialists wearing protective gear, a situation Toyota has described as “less than ideal” and not conducive to mass production. On the upside, the batteries are said to have impressive performance, and Toyota claims that they can remain up to 90 per cent efficient for as long as 30 years.