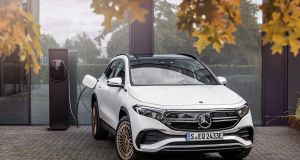 Mercedes has launched its second all-electric model, following on from 2018’s EQC SUV. All but inevitably, the second battery Merc is also an SUV, but this time a rather smaller one – it’s the EQA, based on the GLA.

Essentially, to create the GLA, Mercedes has ripped the petrol or diesel engine out of a conventional GLA, inserted a 140kW electric motor and a 66.5KWh battery pack and slapped the blanked-off grille from the EQC on to the front.

Well, obviously it’s a little more complex than that (indeed, Mercedes refers to the borrowing of EQC styling cues as “electro-aesthetics”) but the three-pointed star brand is potentially taking a risk by launching an all-electric model that shares so much with a petrol equivalent.

While rivals such as Volkswagen ID.4 and Ford’s incoming Mustang Mach-E use purpose-made, bespoke electric chassis, the EQA uses the same basic structure as the conventional GLA (a platform that Mercedes refers to as NGCC, or New Generation Compact Class). While the NGCC platform has been created with electrification in mind, there are compromises to be made.

The most obvious one is when it comes to interior space. In order to make room for the battery, Mercedes has had to jack up the rear seat a little and eat into boot space. Indeed that boot space is some 100 litres smaller than that offered by a liquid-fuelled GLA, and at 340 litres, is actually smaller than you’d find in a Volkswagen Golf hatchback.

Nonetheless, the sharing of platforms in this manner has advantages. Mercedes has been able to bring its all-electric EQA to market a little quicker, and a lot more cheaply – European prices start at €47,540.50 before grants and rebates, although Irish prices are as yet unconfirmed – than if it had developed a bespoke platform, and there’s no compromise on range.

From its 66.5kWh battery, Mercedes claims that the EQA can stretch to 426km between recharges, which is broadly comparable with the Volkswagen ID.4 (albeit the ID.4 uses a slightly smaller battery to achieve similar performance). The EQA’s average electrical consumption is pegged at 15.7kWh/100km, which is impressive for a relatively tall vehicle, helped no doubt by a slippery 0.28 coefficient of drag figure and aerodynamic alloy wheels.

Acceleration from the 140kW electric motor (equivalent to 190hp) is brisk, with 100km/h coming up in 8.9 seconds. And this is just the first model in a whole EQA family – according to Markus Schäfer, Mercedes’ head of research: “We will offer a whole family of EQA models, with output ranging from 140 through to more than 200kW, and with front-wheel as well as all-wheel drive.

“And for those for whom the issue of range is particularly important, our portfolio will in due course also include a special version of the EQA with a radius of more than 500km. The EQA proves that, by using a tried-and-tested architecture, it is possible to achieve an excellent compromise between performance, costs and time to market.”

Mercedes is also rolling out the styling tweaks for the EQA, with “rose gold” trim edging on the exterior, and for the high-priced Edition 1 version, perforated leather seats that reveal another layer of electric-blue material beneath.

The EQA gets the same MBUX electronic dashboard as the EQA, with its distinctive widescreen displays (which look rather as if an iPad has been stretched and distended out as far as it will go).

This features now-de-rigeur online connectivity, smartphone integration and digital instruments, as well as a cheery “Hey, Mercedes” digital voice assistant. The EQA also gains a new function, the so-called Electric Intelligence add-on for the satnav. When you put in a destination, this system will take account of the amount of charge you have, the way in which your car and your driving style uses that charge, and other factors such as the weather and how hilly or flat your route is, and will automatically add in stop-offs at charging points to make sure you can complete your journey.

Mercedes is also offering customers access, through its Mercedes me Charge service, to 450,000 public charging points across Europe – 175,000 of which are certified to provide power from renewable or offset energy.