All the while, Tesla is catching up… 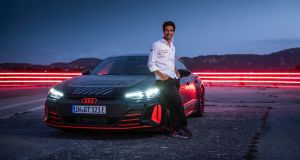 Audi’s electric Formula E racer Lucas Di Grassi on the e-Tron GT: “For me, is the best all around car I’ve ever driven”

As with everything since last March, we can’t actually go to the Consumer Electronics Show (CES) in Las Vegas this year, but major car makers are nonetheless still, digitally, piling into the biggest electronics and software show of them all, in the hope of convincing tech-savvy customers to buy their latest wares.

It should come as no surprise at all that both BMW and Audi were keen to show off their newest electric cars, keen to build up consumer anticipation ahead of on-sale launches later this year.

The BMW iX and Audi e-Tron GT represent, respectively, the cutting edge of battery-powered SUV and sports saloon design. Yet the way in which they were presented to a broader public than those who read the motoring pages could not have been more different.

Audi went traditional. Well, as traditional as you can get in the age of attending such events through the media of Zoom and Microsoft Teams. A huge portion of a test track was set apart, ringed with cameras, and rigged with moody laser lights.

A racing driver - Audi’s electric Formula E racer Lucas Di Grassi - was brought forth, strapped - Stig-like - into the car and despatched for some rapid laps. Then, with the e-Tron GT cooling off in front of the cameras, there was a ‘fireside chat’ with Di Grassi, Marc Lichte (the car’s designer), and Sigfreid Pint (one of the e-Tron’s key engineers).

In many ways, it was a predictable event. A little light on new facts, perhaps, but full of bubbly enthusiasm for the car (in fairness, all of the participants’ pay cheques are stamped ‘Audi’). Di Grassi’s liking for the electric e-Tron GT did seem entirely unforced.

“For me, is the best all around car I’ve ever driven,” said Di Grassi. “We’re talking about incredible acceleration, very close to my Formula E car. We’re talking about special dampers adaptive suspension, four wheel steering, very low centre of gravity, it is just a mind blowing car.”

There were also promises made about the car’s eco-friendliness. While, being an electric car, it makes no local emissions from its power source (although like all EVs there will be some particulate emissions from its tyres and brakes) Audi is also saying that by the time it goes on sale, the Bollinger Hohe factory where it is built, alongside the very-much petrol-powered R8 V10 sports car, is already CO2-neutral in how it makes cars. Audi has committed that all of its plants will be CO2-neutral by 2025.

The German brand has also, since, announced that its e-Tron models are capable of reversing the flow of electricity into a charging point, allowing their owners to sell spare battery charge back to the grid at peak demand times - a critical modification in light of changes to Irish electricity regulations this week.

For all the impressive driving and machinery on show, there was the lingering whiff of predictability though. A sit-down chat and some hot laps are the stuff of which a thousand new car presentations have been made. Indeed, one participant did complain, through the Microsoft Teams chat bar, that they were disappointed in the way the presentation seemed skewed to a motoring-engaged audience, rather than a broader swathe of interests.

Which is possibly where BMW comes in. BMW wasn’t strictly speaking showing off its new iX electric SUV at CES, but the car was certainly featured, as were some (but not all) details of its new iDrive infotainment system. Instead of a presentation by buttoned-down German engineers, though, BMW decided to do something a little… different.

The marketing campaign surrounding the new iX has been bizarre at best since the car was first shown off last November. To put it mildly, the iX is visually challenging (pretty ugly, really) but instead of trying to mollify critics with a claiming ‘you’ll come round to it’ BMW went on the offensive in both senses of the word. It lashed out at critics, calling them ‘Boomers’ and saying that the car was designed for younger, hipper buyers.

For the CES, BMW created a five-minute promo video, which gave anthropomorphic voices to both a new iX and a 7-Series from 2001. The link between the two cars (badge apart) is that the 7-Series from 2001 was the first car to feature BMW’s iDrive system, while the iX is the first car to use the next development of that system, including a vast, curving screen that stretches half way across the cabin.

The opportunity was clearly there to remind people that back in 2001, we all thought that the 7 Series was unconscionably ugly, but we did indeed get used to it, and now the car looks almost charming.

BMW didn’t go that way. Instead, it created an expletive-littered fight between the two cars, with the 2001 7 Series being given the grumpy older persona, while the iX was presumably meant to appear more modern and cutting edge, but which actually came off as irritatingly hipster-ish.

If it was meant to try and endear the new iX to us, then mission failed. Social media erupted in derision.

This Is Money, a UK-based website, said that the film: “Appears to stoke up inter-generational conflict, portraying baby-boomers - born from 1946 to 1964 - as an angry, narrow-minded, stick-in the mud generation that doesn’t ‘listen’, condemns modern ideas as ‘bull***t’, and evokes the response: ‘It’s almost impossible to talk to your generation.’”

Which seems odd, given that the €85,000 price tag of the iX means few younger drivers, if any, will be able to afford it. Many commenters said that it would put them off buying a BMW for good.

Marketing expert Laughlin Rigby told The Irish Times: “I can’t see any real benefit or strategy in BMW pursuing that approach. It will also alienate their loyal 7 series drivers.”

Tesla in the wings

It’s a critical question, because the big German car makers are running out of time to set out their electric car stalls. Upstart Tesla is rapidly catching up with Munich, Ingolstadt, and Stuttgart in the high-end sales charts, especially in China, where Automotive News noted that Tesla (along with local car makers Nio and Li Auto) was making ‘serious inroads’ into the German hegemony of the luxury car market.

“The historically untouchable German brands have begun ceding market share to Tesla and other luxury EV specialists,” Alexander Potter, a Piper Sandler & Co. analyst, wrote in a report. He predicts the trend will only get worse for BMW, Mercedes and Audi. “Bottom line: whenever Tesla opens a store in a new city, the Germans lose share... and there’s still lots of headroom for opening new stores.”