I’d negotiated the price, and felt triumphant. Could we fare better this time around? 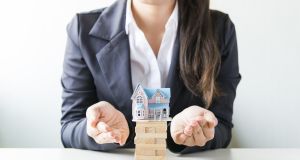 What if we were making a big mistake, one that would only become obvious in hindsight?

When I was 26, my then boyfriend mentioned he was thinking of buying a house. “Sure, will we buy it together?” I said, on the spur of the moment. And that was that. It so happened that a sensible friend of his had created a spreadsheet analysing every area of Dublin based on a great many criteria that had never occurred to us. Things like proximity to schools and creches, which struck us – bless our innocence – as hilarious.

Anyway, he had calculated that one particular estate in Dublin 15 represented the best value in the city, given the amenities it offered. He put his money where his mouth was, buying a lovely four-bedroom house. With property prices rocketing, we decided to follow his example before we missed the boat completely. He sent on the fabled spreadsheet, we got approved for a mortgage of €480,000, and when an unobjectionable three-bed came up in the area, we went for it.

I designated myself as negotiator and made an opening parry of €460,000. The response was disappointing: a woman had bid against us. Over the course of that Friday afternoon, I battled it out with this mystery lady, back and forth, to and fro, up and up and up. Finally the agent came back to say that the other party had dropped out. I was the successful bidder.

It had taken all of three hours. An impressive afternoon’s work. I rang my boyfriend with the great news. “I got the house,” I said triumphantly. “I had to go to €480,000, but I got it.”

Why? Because that was the plan.

For better or worse, we went through with the purchase. And then, after a brief honeymoon period, the value of our house plunged by almost €200,000.

Now, nearly 14 years later, we’re getting ready to buy our second house: a family home near the coast with enough space for me, my now husband, our two children, 20 boxes of toys, and several future pets. We initially ruled out the house because it’s a fixer-upper, but on closer inspection we realised it had several unique factors in its favour.

One: The house is on a cul-de-sac off a cul-de-sac; it couldn’t get any safer traffic-wise unless we moved to an Amish community.

Two: A close relative of a certain loveable “starchitect” lives in the estate. “Not the good craic brother? The one that was on the telly?” a usually stoic friend asks, suddenly giggly as a schoolgirl. I think we’ll be seeing a lot more of her.

Three: All the bathrooms have two doors, which should make for a more exciting life. (Our children are already planning Secret Seven-style midnight meetings in the Jack and Jill bathroom between two of the bedrooms.) In fact, almost every single room has two entrances, so the kids will be able to scoot endless laps around the entire house and we will never, ever be able to catch them.

Four: It has a sunroom that looks like the love child of a Swedish sauna and a community yoga hall. It’s a bit mad . . . and I kind of adore it.

So we decided to roll the dice again, but this time around my husband appointed himself as chief, indeed sole, negotiator. Much as I hate to admit it, he did a far superior job, going “sale agreed” a little under the asking price. But though we should have been celebrating, now it was my turn to get the collywobbles.

Were the gods of the property market trying to warn us off? What if we were making a big mistake, one that would only become obvious in hindsight?

I began to see ominous signs everywhere. The surveyor had spotted some slight sagging of the sunroom roof. I rang him to mull it over again: “How slight is slight? Should we be worried?” Hard to say. I consulted a friend who had been through a renovation. Get a grip, it’s just a bit of roof droop, came the reply.

But it wasn’t just the roof droop. A niggly right of way issue cropped up. And then building work started nearby. Were the gods of the property market trying to warn us off? What if we were making a big mistake, one that would only become obvious in hindsight? I had missed the signs with our first house and now, almost 14 years later, its estimated market value is still €80,000 below the price we paid.

I rang the surveyor to air more worries, but like all good therapists he was reluctant to tell me what to do. In the end, he asked if I had got a good feeling when I was in the house. Yes, I said, yes I did. “If that part is right, you can deal with anything else,” he advised. Hallelujah! A weight had lifted; it felt like we had permission to take the plunge.

And then, just as we were about to close, someone said: “Did you see the house that went online this afternoon?” I had tried to be good and stay off property sites, but I couldn’t not look. It was almost identical to the house we were “sale agreed” on, except with all the renovation work completed. It was more expensive and the location wasn’t quite as good, but there would be no dust, no builders, and no unexpected bathroom visitors.

I stewed over the dilemma. And then I showed photos of it to our children. “Hate it,” they replied in unison. Seriously? How could anyone hate such a picture of glossy perfection? “It’s not the Jack and Jill house,” my daughter explained. “You can’t swap at the last minute,” she added with a steely look.

She was right. I remembered then all the little things that had convinced us that the Jack and Jill was the one: the way the houses in the estate had glowed at Christmas time around the central green, making it feel more like a cheerful square than soul-sapping suburban sprawl. The way little children were able to play football on the green and learn to rollerblade on the supersafe cul-de-sac. And I remembered that my parents now live across the road. How could living there be a mistake?

Caroline Madden is a freelance writer

Doctors on Covid-19 frontline: ‘What I miss most is normal human contact’
7