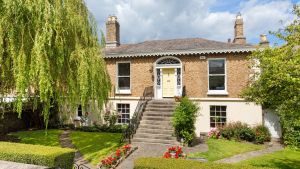 The curb appeal of this very pretty villa-style house at 22 Garville Avenue in Rathgar will help the new owners during what will be a lengthy renovation to believe that it will be all worth it.

The mid-terrace period house, built in the 1840s, comes with many original features – the attractive front door with intricate side lights and topped with a fan light is a good indication of what’s inside – and the property now is in clear need of modernisation.

It came on the market about five years ago as an executors’ sale; it had by then been lived in by the same family since the 1940s who were careful to keep the decorative plasterwork and fine fireplaces during their time in the house, and after some time and price drops it was withdrawn.

The sellers had a rethink, selling off a small portion of the 190ft long rear garden where there are now two mews, while retaining rear vehicular access and a substantial back garden for number 22.

They also have tackled what can often be an impediment to potential buyers afraid that the house’s protected structure status will mean lengthy delays and wrangling with council planners: they have secured full planning permission for a full internal upgrade and to add a 44sq m extension to the rear.

As well as the plans, the architects have supplied computer-generated visuals to clearly show how the new layout will work so buyers can appreciate how the house could become a five bedroom home with ensuites and new bathrooms – two bedrooms up at hall level, three below – with a library, and a formal living room upstairs and an open plan kitchen, dining and living space at garden level.

A contemporary mostly glazed extension will help throw light into this garden level and give better access to the garden without detracting from number 22’s obvious period charm. The work would bring the house to 305sq m/3,283sq ft. The rear access will greatly help facilitate the building works – always a consideration during a major renovation.

Sherry FitzGerald’s Andrea Whelan, is handling the sale and estimates that the plans could be realised and the house modernised and extended for between €500,000 and €600,000. Number 22 Garville Avenue, Rathgar, D6 is for sale seeking €1.35million.

In TV renovation programmes there usually comes a moment when the owners return to their house after the builders have just completed the demolition and clear-out phase of the work. That’s because it is as cruel as it is instructive.

For viewers the entertainment value lies in seeing the look of alarm mixed with terror and a tiny bit of excitement , as – for possibly the first time – the owners fully understand what phrases like “stripping back to the brick” really mean and the scale of the job at hand is laid bare.

From the outside number 52 Dartmouth Square looks like it needs, maybe, some work – the original sash windows are for example clearly in poor condition. Stand in the rooms at garden level in this 1890s house, though, and the scale of the work needed – and the potential – is revealed.

The mid-terrace house has been under renovation for some time – the owner living here while working on the project. After installing a new staircase from hall level down, part of that work involved stripping back the rooms at garden level, removing all plaster and woodwork and digging out the floor. And that’s how this level looks now – ready for the builders to come in.

Any major alteration in a protected structure such as this period redbrick – even replacing those windows – requires planning permission and the owner has engaged an architect and secured that permission, and not just for the usual refurbishment works, but also to demolish the tiny two storey return to the rear and build a new extension at ground and first floor level.

There is considerable renovation work already done. There’s a new roof and at the top of the house the four double bedrooms have been replastered as has the hall, stairs and landing. Two bedrooms are in use, while a third has a shower against one wall and nothing else, the fourth has a toilet in a corner – practical solutions until the main build starts.

At hall level, where the room proportions are grand, in the front reception room there’s a makeshift office while the back room has a run of cupboards against one wall to make a rudimentary kitchen. These rooms could interconnect but the gap where the folding doors should be is boarded up – another thing on the to do list.

There is rear vehicular access and the back garden, which will still be a good size for a town garden even after the extension is built, is south-facing.

Dartmouth Square is a popular location just a short walk to the city centre, and set between the two main arteries running out to Dublin 6 and Dublin 4.

Built in the 1890s its communal square is owned by the residents and Dublin City Council and is a beautifully planted, well-maintained and much used space.