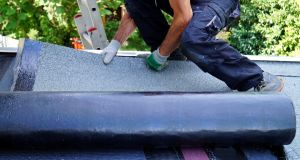 The cheapest solution is to line the barge with a good quality felt.

The barge at one end of my roof, which is made of concrete or cement, has deteriorated, and is causing a damp or black mould problem in the back bedroom. I got it repaired a few years ago. I’m not saying the roofers were cowboys but they all wore matching stetsons and spurs. The tar paper or whatever they applied came off gradually with each big storm. What is the cheapest and most effective way of capping it? The barge on the other side of the roof is covered in lead sheets.

For the uninitiated I had better explain that the “barge” refers to a roof/side wall junction where the wall extends up just above the roof and is covered with a band of concrete. By comparison, most houses in the country have a typical “eaves” detail whereby the roof extends beyond and overhangs the external walls and is lined with a fascia on the vertical face and a soffit on the horizontal surface underneath the projection.

The barge detail is a traditional detail that one would typically see on houses in the west of Ireland. However, some more recent architectural styles have reintroduced the concept of the barge detail, and whilst this is much less common than the standard roof overhang, it can now be found on houses in many parts of Ireland.

Notwithstanding the architectural merits and personal preferences, a roof overhang with standard eaves performs better in that it ensures a good weather seal at the roof/wall junction. However, provided that a barge is correctly detailed, this should also provide an adequate weather seal whereas a poorly formed barge will give rise to a risk of water penetration.

Before jumping to this conclusion, a barge detail can also give rise to a “cold bridge” and thus it is quite possible that the problem you are experiencing is not one with dampness but rather one with condensation. I suspect the latter is the most likely problem here, given your reference to the black mould growth. A leak or water penetration will more often than not give rise to brown staining and streaking, but I know from more than 30 years’ experience that visible effects can be very similar and it would take an inspection to diagnose the problem definitively.

So, if the problem is not correctly diagnosed, then whether the suspected damp issue is addressed by the “cowboy builder” or by an experienced and competent builder the result will be the same, ie failure to address the cold bridge and resultant condensation issue.

Notwithstanding the above let’s assume that the problem is due to water penetration through the barge, then the key issue is to ensure a proper weather seal. The cheapest solution is to line the barge with a good quality felt, which sounds like what has already been done. However, if the property is very exposed, or if the felt is poorly applied in the first instance, then there will be a risk of the felt peeling off in time which appears to be what has happened here.

Rather than looking at what is the cheapest option – which is often not the best, it is better to look at the most appropriate and best solution for the circumstances. You have pointed out that the barge on the other side is lined with lead and this in fact gives you the answer you are looking for as a correctly detailed barge will not allow water to penetrate. This barge should be lined and flashed in lead all laid in accordance with the recommendations of the Lead Development Association.

However it will not stop the mould growth if the issue is actually due to a cold bridge and thus for the avoidance of doubt you should have the house inspected by your local chartered building surveyor who would then be in a position to correctly diagnose the problem and to provide specifications and instructions for a builder who can then address the problem as appropriate.

Val O’Brien is a chartered building surveyor and member of the Society of Chartered Surveyors Ireland, scsi.ie

Looking for a nifty home-working desk? This Irish designer model could solve your problems
7