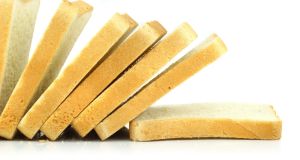 By the 1940s sliced bread was so popular in the US that, when war-time rationing shut down bread-slicing machines, it prompted newspaper articles on how to safely use a breadknife

“The best thing since sliced bread” – an enduring saying that would have pleased engineer and inventor Otto Frederick Rohwedder who, in 1927 in Missouri, invented the first automatic commercial bread slicer. It wasn’t an instant success – consumers were suspicious as the wrapped bread didn’t hold together until Rohwedder developed a U-shaped metal pin that went through the loaf to hold the slices together and make it more “loaf looking”. Ads for the new-fangled sliced bread included instructions on how to open the wrapper and remove the pin. By the 1940s, however, the undeniable convenience of sliced bread was so popular in the US that, when war-time steel rationing shut down bread-slicing machines, it prompted anguished articles in newspapers and reminders on how to safely use a breadknife. Such was the uproar the ban lasted just two months with the headline in the the New Times noting: “Sliced bread put back on sale; housewives’ thumbs safe again.”