Barbara Behan's beautifully packaged car perfumes were picked for the goodie bags at this years Oscars. She's applied the same classic design to her London townhouse 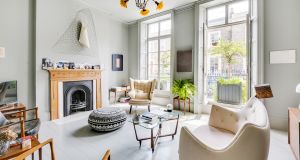 You don’t work in the advertising industry for decades without developing a keen eye for a gap in the market. Glencree, Co Wicklow native Barbara Behan and her business partner Carrie Hindmarsh spotted one in the luxury goods sector which eventually resulted in their company landing a spot in this year’s Oscars goodie bag; the only Irish or British brand to have been selected.

Charabanc’s car fragrance pomanders, designed to evoke memorable drives in Umbria, the Pennines and even Route 66, are now likely hanging in the cars of Brad Pitt, Leonardo Di Caprio and Saoirse Ronan.

“Carabanc’s aesthetic takes its inspiration from classic car interiors, with all the unmistakable attention to detail that that brings. So our stainless steel pomanders are hand-spun and encased in the finest artisan-moulded leather in motoring colours [like] racing green, London tan, Orient black and signal red,” says Behan.

Perhaps not surprisingly Behan has applied this very same keen design sense and attention to detail to her home in Pimlico, London.

Behan moved to London from Glencree in the mid-90s, enjoying the cut and thrust of media life from her base in the West End. By the time it came for her and her husband Nick to buy a more substantial property, they happened upon this 1860s house entirely by chance.

Its central location (“three Tube stops from Oxford Circus”) was a huge boon. Not only was it perfect for commuting into the West End and enjoying everything that the city had to offer, the location was also beneficial when Behan and Hindmarsh were creating their start-up company in 2018.

“I still call Glencree home and love it there still, and I remember commuting into town for school every day,” says Behan. “It’s probably why I’m all or nothing with my homes – it needs to be bang in the middle of the action or properly flung away from the madding crowd.

“It used to be two properties, so initially we bought then and rented one out immediately, then moved into the other one,” Behan recalls.

The couple, who share the home with their daughter and two dogs, merged it into a single family dwelling in 2002.

Behan’s approach to creating her own living space is eclectic, mixing antique and modern furniture with several pieces of abstract art. She’s not a fan of what she calls “beige and bland, overly interior designed” spaces.

“My approach to any property I own, even the ones in my head that I don’t own yet, is to be very sympathetic to the environment it finds itself in,” she says. “There’s an original commercial element to this house at the front that we retained and used as an entrance hall.”

Yet when the couple moved in many of the original period features had either been removed or obscured.

“I found original doors from properties on the street that were throwing out their original doors,” smiles Behan. “I salvaged the band rails on the staircase that make up the spine of the house, and I put all the fireplaces back in, salvaged form all over the place.

“The floorboards came from an old church in Wales. I’ve basically restored it to what it would have been like in the late 1800s, but I’ve got underfloor heating underneath the Welsh floorboards.”

Behan decided largely on white and grey walls so as to sufficiently highlight her art collection – something she learned in her role as a gallerist.

“I would have more colour, but in order to show art at it’s best you need white or grey walls. I’d rather grey to white, as the latter is quite stark.

“I love all art to be honest – I have a mix of older pieces and new artists working in an older style. It crosses all genres and mediums. I love working with artists that are quite politically-minded and cast a little light on society, particularly with touches of humour.”

Among her favourite creators of art is the Dresden visual artist Gerhard Richter.

“Throughout his prolific history he has explored painting through a rich and diverse range of ideas that has spanned realist works based on found images and photographs, abstractions made with a squeegee, two and three dimensional glass works, abstract drawings, and overpainted photographs from images of daily life,” says Behan. “He kept painting alive and kicking when others questioned it, and his work has been immensely influential to the artists I have worked with.”

Most of the furniture items in this Pimlico home are original vintage pieces. Among her favourite designers are Scandi Modern greats like Hans Wegner, creator of Behan’s 1940s sideboard, and Ib Kofod-Larsen, who made Behan’s Elizabeth chair in 1956.

“Many are hard-won finds,” notes Behan. “I’ve bought and sourced them over the years from auction houses, online or flea markets.”

Behan’s favourite room in the house is the kitchen/diner, where she and the family spend much of their time.

“There’s a lovely space in the courtyard leading from the kitchen, and this place houses lots of knick-knacks from my godmother and other members of my family. If I were to save anything in a fire it would be a Chinese ginger pot on the sideboard that my parents gave me as a wedding present.

“We’re always in need of a meal. Food has a good knack of bringing us together, and it’s where we put the world to right.”

From eating healthily to staying warm, how to treat coronavirus in the home
6

Let Joe Wicks get your children fit. All you need is a screen and some space
10