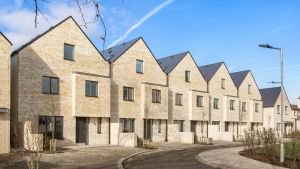 Prospect House, an infill site of just over one acre on Barclay Court, a small cul de sac off Temple Road, was bought by Carrickneagh Developments in 2016. Managing director Diarmuid O’Sullivan has brought a hotel finish to this boutique new homes scheme possibly derived from his former role as operations manager at the Shelbourne Hotel.

“It’s all about meeting people’s expectations and delivering a very presentable product,” he says. After a period running a pub called PJ’s and its Blue nightclub in his native Longford, he decided to follow the lead of his house-builder father-in-law and returned to college to study construction engineering at night.

The scheme includes six two-bed apartments in the original house (two at entrance level and one on each return) and nine houses finished in a warm yellow clay brick.

The customer-focus of O’Sullivan’s hospitality background is evident in the finished quality of the homes, which don’t come with just white goods but carpets and engineered oak floors too. “All you have to do is turn up with your bed on your back and unpack. Everything else is done. People don’t have the time,” he says.

Fit out was completed by Hyde and the showhouse, a mid-terrace property, features Farrow & Ball paints throughout. The woodwork and doors are picked out in Drainpipe with the walls painted French Grey.

Here the ceiling heights are over 2.5m high and the ground floor is set out in a broken plan layout. The kitchen dining room spans the width of the rear, while the front room can be accessed via weighted, pocket sliding doors.

The gardens are over 7 metres in width, and come paved and lawned in artificial grass, both of which are permeable.

These houses are three-storey and have five bedrooms, three on the first floor and two on the second floor. The bathrooms have smart black hardware and a black marble-effect floor tile.

There are two further two-bed modernist-style houses at the entrance to the development. These will appeal to down traders.

The six-bay, three-storey original building was used as a college and more recently was a private girls’ school, Rosemount Park. Its curved bow walls have been used to great effect in the apartment bedrooms.

The house has been sub-divided into six two-bed units that will appeal to anyone who has ever lived in Hausmann-style apartments in Paris. The attention to detail includes a French polished handrail and mahogany stair treads, lacquered in a soft warm hue. Fine six panel, solid timber internal doors made by Geraghty Bespoke Joinery come with beehive timber door handles.

Each apartment at ground level has its own timber conservatory entrance, accessed via a set of steps, at either gable end. Number 1, which extends to 101sq m/1087sq ft, is particularly impressive. Asking €615,000, it has a trio of timber-paned sash windows, complete with shutters, and a sizeable open plan living room with a smart kitchen by McNally. (All kitchens are fitted with Miele appliances).

The bedrooms and family bathroom are down a second series of steps. The hall, linking the living to accommodation, is lined with floor-to-ceiling storage and the bathroom has period-style cast iron radiators with ceramic centres.

Apartments three and four, respectively 88sq m/947sq ft and 85sq m/915sq ft, are asking €635,000 and €675,000, are on the hall return and first floor and these best emulate Paris’s grand boulevard buildings. At the top of the house are apartments five, a unit of 86sq m/926sq m and asking €650,000, and six, which measures 84sq m, has spectacular mountain views over Rockfield Park, and is asking €675,00. The property is what New York agents call a “walk-up”, in that there is no lift, which may deter downtraders looking for something on the level.