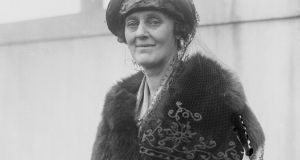 Countess Markievicz: she was the first woman elected to Westminster, a seat she never took up 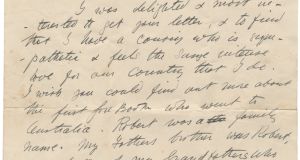 A hundred years after the formation of the first Dáil Éireann, which convened between 1919 and 1921, after a landslide victory for Sinn Féin in the 1918 election, it appears that history is repeating itself with the recent victory of Sinn Féin in the 2020 general election.

In that first government, Constance Markievicz (1868-1927) an Irish politician, suffragette, nationalist and socialist, was elected as minister of labour. She also held the accolade of being the first woman elected to Westminster – a seat she never took – and the first ever female cabinet minister in Europe.

The date is presumed to be September 25th or 26th, 1920, as Markievicz mentions she is writing two nights after the British attack on the town of Balbriggan on September 23rd, and the murder of John Lynch in the Royal Exchange Hotel the same night.

She describes how she has “been on the run since last December” in what she terms as “a terrible time” partly due to the creation of the Black and Tans. She explains: “They are ex officers and are dressed partially in khaki and partially in the Black of the Policeman”. Their function under the English who organised them is “a terrible force to try and exterminate us”.

Having been sentenced to death for her involvement in the Easter Rising of 1916 (she was second-in-command of a troop in the Irish Citizen Army), Markievicz was released in the general amnesty of June 1917, only being spared the firing squad by virtue of her sex. She spent the remainder of her life on the run, and in and out of prison.

She laments: “I wish you all knew what we are going through, and I know that every just man and woman through the world would instantaneously hold up the English and insist on our being left to carry on our Republic.”

Sinn Féin leader Mary Lou McDonald, who could well be the Ireland’s first woman taoiseach said in an interview in 2012 that her favourite speech was by Constance Markievicz: Women, Ideals and the Nation, delivered in Dublin in 1909 to the Students’ National Literacy Society.

If elected taoiseach of the Irish Republic, McDonald may well have the opportunity to realise the dream Markievicz had for Ireland, as outlined in the final lines of this letter penned a century ago: “and rule our people as they deserve to be ruled, in an orderly and just manner... trading with other nations, and living amicably with all men”.

Do you have a Caroline Flack relationship with social media?
10

These homes are the business – or should that be the other way round?
Real news has value SUBSCRIBE