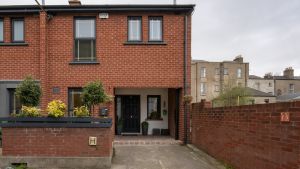 Percy Lane is a secret little lane connecting Haddington Road to Percy Place, on the banks of the Grand Canal. It is home to many different styles of properties, mainly mews houses built in the 1970s and 1980s.

It made headlines when Oakmount Development and Odos Architects brought One Percy Place to the market in 2015. The blackened zinc clad terrace of three three-storey, A-rated homes had asking prices from €1.295 million. The three sold that same year. In June 1c and 1b both sold for €1.2 million apiece while 1a sold for €1.1 million in October.

Then in 2018 number 19 came to the market. Situated across the street from the Odos-designed homes this was a three-bedroom detached house with a west-facing patio garden, and off-street parking for two cars. It had been purchased by a pair of builders, for €995,000 according to the property price register, who extended its footprint to 119sq m/1,284sq ft adding 16 sq m of space and turning the three-bed into an A-rated home. Its asking price was €1.695 million. It didn’t sell.

The layout hasn’t been changed. It has a carport to the front that gives good off-street parking but may be better used as indoor space. The next door neighbour has filled this area in to give valuable additional living space and you could do this here too but it would compromise the parking space available.

Inside there’s a small but bright kitchen with marble counter tops to the front and a good-size livingroom to its rear. These are set out in an open-plan fashion and patio doors opening out to a decent-size city garden that is north facing but will get good western light.

From the livingroom an open-tread staircase leads up to the first floor where there are two decent-size bedrooms and a bathroom.

The house has a C1 BER-rating and its existing windows have been painted in a fashionable grey. The property measures 68sq m/731sq ft.

Lockdown living: ‘We’ve moved into a cabin so the kids can have the house’