Lesser-known forms of the condition, which few people have heard of, are often misdiagnosed 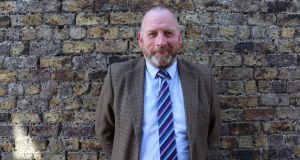 Kevin Quaid: “People are very ignorant about dementia. There’s a lack of education and people just don’t understand it.”

“The worst part of dementia with Lewy bodies (DLB) is the hallucinations and the nightmares,” says 54-year-old Kevin Quaid from Cork.

In the year-and-a-half since he was diagnosed with the condition, he has written a book about his experience, called Lewy Body Dementia, Survival and Me. He wrote it because not enough people know what it is, or know that dementia doesn’t always mean memory loss.

Most people have heard of dementia, but research suggests many don’t fully understand what it is. Dementia is an umbrella term that describes a set of symptoms that occur when brain cells stop working properly. Dementia is caused by different diseases, the most common of which is Alzheimer’s.

Dementia with Lewy bodies (DLB) is the third most common form of dementia, but despite this, many people do not know what it is. This is complicated further by the fact that memory loss isn’t the main symptom of the disease.

Quaid was living in Australia when he first started experiencing issues in his daily life. One day, he went into a shopping centre for a cup of coffee, and then couldn’t find his way out. He also couldn’t find his car and became extremely confused. It took him an hour-and-a-half to get back to his car.

A couple of years later, Quaid moved back to Ireland. He had always worked in construction, but he was starting to make “silly mistakes”. Added to this were the growing tremors in his left arm and right leg. He was shocked when he was diagnosed with Parkinson’s disease.

However, a year-and-a-half ago, he was left completely stumped when a scan revealed he didn’t have Parkinson’s disease after all. Instead, he was told he had DLB. “I hadn’t a clue what it was,” Quaid says. “The neurologist didn’t even have much information on it.”

The main symptoms he lives with now are the tremors and hallucinations. He also has severe difficulty sleeping. “I used to always drink with my left hand but when the tremors got bad, if I picked up a cup of tea I’d spill it. Now I use my right hand, so I don’t notice it as much. When I’m lying down, my right leg can have a life of its own, and I need a walking stick.”

Quaid’s wife, Helena, cares for him, and says one of the hardest things about DLB are the “major fluctuations” in his condition. “There are some mornings where Kevin would be very confused, and within an hour he could be back to his old self,” she says. “That makes it very difficult to diagnose to begin with, but it also makes it difficult for me as a carer.

“When he goes out, he’s well, but when he’s sick, nobody sees him, so it can be difficult for people to understand that this man has dementia. If they meet him in a pub having a pint, they’ll say, ‘what are you talking about? There’s nothing wrong with him’.”

Sadly, like with other forms of dementia, there is currently no treatment that can slow down the progression or stop DLB in its tracks altogether. “The chances are that I won’t see my 60th birthday, and if I did I probably wouldn’t remember it,” Quaid says. “People are very ignorant about dementia. There’s a lack of education and people just don’t understand it. If I was to get one message across, it would be to look at the person and not the disease. We have a past, a present and a future, and we shouldn’t be defined by what we have. Just because someone has dementia, it does not mean that their memory is gone. That’s particularly true for DLB. With all the problems it brings, lack of memory is not usually one of them.

“There are moments of course – I was in a restaurant one day and a guy came in and I asked him how his mother was. It turned out we had been at her funeral less than 12 months beforehand. But for me, the main problems are the hallucinations, the tremors and the sleep issues.”

People who live with some of the lesser-known forms of dementia like DLB, frontotemporal dementia (FTD) or posterior cortical atrophy (PCA) are often misdiagnosed in the early stages, or it takes them longer to get a diagnosis.

Prof Brian Lawlor, psychiatrist of Old Age at St James’s Hospital, says memory loss is the most common symptom in people over 65 who develop Alzheimer’s disease, however, it is not the full picture.

“In older people with Alzheimer’s, the classic presentation is memory loss, but about a third of people who present with early-onset dementia, where it occurs before 65, will have atypical presentation. They might present with language difficulties, or with disorders of emotion and personality changes, which would indicate that they could have frontotemporal dementia. When somebody develops these symptoms, they don’t normally think of dementia. Because of these atypical presentations, there is often a delay in diagnosis.”

“People often misconstrue these other features because they don’t typically fit into what people consider to be dementia,” says Prof Lawlor. “Depending on where the pathology begins and develops most predominantly, that’s going to impact on the different symptoms.”

Prof Lawlor says the first port of call is to go to your GP if you are concerned about yourself or a loved one.

“It’s not just the general public that need to be more aware of atypical presentations of dementia,” he says. “It’s also healthcare professionals. We need to raise awareness – it isn’t always memory loss, particularly in cases of younger-onset dementia.”