Weight Loss: ‘Why are we doing this? Are we nuts? This is terrifying’ 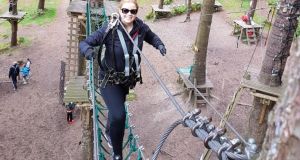 Rachel Flaherty at Zipit Forest Adventures in Tibradden Wood in the Dublin Mountains: “It was an intense workout, but I didn’t think about that while I was doing it.”

“Jesus, why are we doing this? Are we nuts? This is terrifying,” shouted a woman in front of me as I stood clinging on to a tree for dear life as the platform swayed back and forth in the wind. But it was shortly followed by shrieks of laughter as she called out, “This is the most fun ever.”

Her words echoed the battle being fought in my head between fearing I was facing certain death as I looked down at the ground 14 metres below while knowing logically, I was wearing a harness and perfectly safe, and this really was going to be a lot of fun.

But as the swinging log I needed to step on to wobbled from side to side in front of me, I did long to return to the sweet embrace of my comfort zone. When I did finally step forward and get through the obstacle course, the feeling of exhilaration and achievement trumped all others.

A couple of weeks ago after doing my first indoor climbing session I was feeling more confident about pushing myself out of my comfort zone, so I signed up to do a zip lining and a treetop obstacle course. But my bravery had faded as I arrived at Zipit Forest Adventures in Tibradden Wood (Pine forest) in the Dublin Mountains, south Dublin, on a mild and dry Sunday morning.

My palms started to sweat as I stared at the platforms high up in the trees. I began to doubt my decision to do this challenge, questioning if I should have waited until I was fitter or reached my goal weight (I’ve about 2st (13kg) to lose and have lost 3 ½st (22kg) so far).

I did find it initially a bit tricky clipping on and off, but quickly got used to it. A few children took the lead and showed me how it was done with ease.

Steven explains there are five circuits, ranging from 1 metre to 20 metres from the ground, and we had about four hours to traverse them. Each circuit gets more challenging and higher, and includes tightropes, swinging steps, rope bridges, rock climbing and zip lining.

Clearly, I had the expression of someone being led to the guillotine, so he tells me stories demonstrating the strength of the wires and explains how my confidence would grow as I complete each course.

After we finish safety and practice, it is time to head off on our own and tackle the next circuit. We are reminded instructors are on the ground below ready to give support and help if anyone gets stuck. It is my first time doing anything like this and it is daunting, but also very exciting. I climb up to the first platform and instantly get butterflies in my stomach. It is a strange experience talking myself into walking off the edge of the platform on to an unsteady or moving wire, step or rope, and trusting I could do it. It was thrilling each time I completed an obstacle course and gave me a renewed energy to go further.

Then I arrived at the Tarzan jump. Looking at it from a distance I imagined I would glide gracefully through the air gently swinging myself on to the cargo net and climbing effortlessly on to the platform. The reality was a little different. Fear took control of me again. I doubted I could support my own weight holding on to the rope and did not want to leave the platform.

The longer I stood there, the more reluctant I became to do it as I thought of different ways I could get injured (none were realistic) if it went wrong. Someone shouted: “Stop overthinking it, you’ll be fine.” It was all I needed as I managed to swing across (more fall) and slammed my body awkwardly on to the cargo net. It wasn’t pretty, but it was done. My adrenaline was pumping, and the instructors were right: I did gain more confidence as I “survived” each obstacle.

At the end of the circuit was the reward of zip lining all the way down, which was incredible fun and worth all the effort to get there.

The third circuit was the white course, more challenging and higher, and it took me about 45 minutes to get through. Then came the second most difficult course, the blue circuit, which I had ruled out attempting that day before I began but after a chat with an instructor, I decided to give it a go. I had achieved much more than I thought I was capable of and ready to push myself farther.

This circuit was much higher at more than 14.5m and longer, and the first challenge of climbing up a hanging movable ladder looked scary. I finally started to heed the tip of using my legs more as my arms were tiring at this stage. As soon as the time arrived to climb it my mind had returned to telling me I was facing death, but I kept going because going back was even scarier at that stage. The wind picked up and the platforms on some obstacles started to sway a little. Everything seemed more intimidating at this height.

Then I reached the snowboard in the skies. Each time I put one foot on it, I was convinced I was going to fall off. Eventually, with some encouragement and coaxing, I got across. I used to think I didn’t have great balance, but I learned when I feel my life depends on it, my balance is good. I was exhausted and elated as I zip lined down the final course of the day.

It was a mental and physical challenge, and the sense of achievement and feeling of freedom after facing my fears when I had finished was fantastic. It was one of my favourite things I have done in a long time. I didn’t get as far as the highest level (red), which had the BMX bike ride from tree to tree and the base jump, but I know I will do it.

It was an intense workout, but I didn’t think about that while I was doing it. I do need to put more effort into building my upper strength, but I didn’t need to be an athlete to complete the circuits.

It taught me to trust myself more and that my body can achieve far more than I think. I lost only half a pound that week but what I gained through the challenge was worth far more to me than weight loss.