Daddy, dementia and me: ‘None of us would be here if me granny had drowned that day?’

George is often back in his native Dundalk, where the dramatic near-drowning of his grandmother is his favourite tale 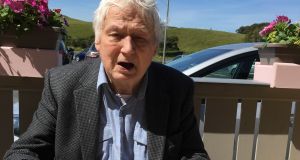 George: Here in his nursing home in the wild west of Co Mayo, he is often back in his native town on the east coast mitching from school.

Daddy doesn’t care about what happens to him after he is dead. He says why would he give “a shit about something he has no control over”.

“Sure I won’t baround to know, Áine, so what does it matter?”

I say it does matter. He insists it doesn’t.

I suggest he might like to be buried in Dundalk where he grew up: where his mammy and daddy are interred; where his favourite Auntie Brigid (“the only person who ever gave him real love when he was a child”) lies with her Cumann na mBan pin; where there was an old IRA rifle salute when granddad died back in 1969; where these days Daddy wanders in the nooks and crannies of his memories.

Here in his nursing home in the wild west of Co Mayo, he is often back in his native town on the east coast mitching from school; secreting himself in the gallery of the Redemptorist church to read the epic tales of the apostles and the disciples: down there on the road to Damascus with Saul, although this ageing rebel never took that u-turn to become a goody-two-shoes. (Halos were never part of George’s modus operandi. Still aren’t. Ask any of his carers.)

Instead, he is hopping up on his bicycle and heading off on the five-mile journey to the seaside village of Blackrock to hide in the sand dunes and smoke butts of Carrolls Number One cigarettes; or joining Cúchulainn and the Tuatha de Danann over there across the bay in the Cooley mountains, defending the sacred bull, Donn Cualigne, from the marauding Queen Medhb of Connacht.

When the adventures were over for that school day, he would return home, as if freshly churned butter wouldn’t melt in his mouth, with his satchel over his shoulder and his secret life stashed in the recesses of his vivid imagination.

Although sometimes, on his return from battle, he would stop on the Point Road at Aunt Brigid’s house – the last thatched house in Dundalk and still in family ownership. There, amid slices of soda bread and that magical country butter, his imagination would be unleashed again with his spinster aunty’s tales of real adventures and heroism. One of which had particular poignancy. It decided Daddy’s fate – well, very existence – and, indeed, mine.

It is the tale of how Annie Roddy, his granny and my great-grandmother, was saved from drowning by her own brother on a stormy evening in Dundalk Bay in August 1884.

She was from the Cooley mountains and regularly took the small ferry across the estuary to Dundalk to do her shopping; walking down the Point Road past the thatched house which would ultimately become her home.

On this fateful summer’s day, with her shopping completed, Annie returned to Soldier’s Point to discover the river was in flood and that the elderly ferryman decided that conditions were too dangerous for a crossing.

However, headstrong always – George didn’t take it from the wind – Annie persuaded a coastguard to transport her across the teeming estuary in an old punt, which quickly proved its unseaworthiness, became swamped and capsized. Neither of them could swim, so they desperately held onto the stern and the bow, with my great-granny’s layers of long skirts acting as a buoy. For more than three hours, the two screamed for help as the boat drifted out towards the open sea.

In a dramatic twist of fate, they were ultimately washed up on the walls at the foot of the lighthouse on the edge of the bay. Before collapsing, Annie Roddy made one final desperate shout for help which her brother, the lighthouse-keeper, heard.

Unsurprisingly, the dramatic tale made headlines in the Dundalk Democrat and The Irish Times. The ordeal didn’t dissuade the bould Annie Roddy though. Undeterred by her near-death experience, she continued her weekly shopping excursions across Dundalk Bay to Soldiers’ Point, striding down the Point Road where along the way a courtship developed with young Thomas Patrick Hearty of the thatched cottage.

Naturally, this tale’s dramatic denouement is a favourite of Daddy’s. These days, when prompted, he likes to tell it while reclining on his nursing home bed, his eyes half-closed and his hands intertwined.

“Did you know, Áine, that none of us would be here if me granny had drowned that day in Dundalk Bay?

SERIES: Daddy, dementia and me
Part 1: I couldn’t face seeing him so confused
Part 2: How can I tell daddy his son is dead?
Part 3: The stand-off about a car
Part 4: Daddy talks to me about Mammy
Part 5: He left the wedding for a cigarette
Part 6: If granny had drowned that day