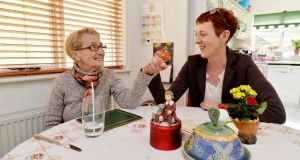 Jenny Hughes is the primary carer for her aunt Philomena Hughes, who has stage 4 vascular dementia. Photograph: Alan Betson

Phil’s wishes were always clear: she wanted to be cared for in her own home. Back in 2014, when she first started to show signs of dementia, her family decided to look after her for as long as they could.

“I was trying to work full-time and look after my own family, so a carer came in for about three or four hours a day to make sure she was eating and to keep her stimulated,” explains her niece, Jenny Hughes. “Phil is widowed and has no children of her own but has always been so good to her nieces and nephews, so between us we dropped into her in the evening time. Then, in 2016, we got a phone call from a social worker to say that Phil had been found wandering and that she was giving away her money, so we knew we needed full-time support.”

Hughes extended her contract with an agency called Care at Home to provide full-time care, drawing on her aunt’s pension and paying some money herself. Through the HSE’s homecare package, she was given 21 hours of support – the maximum allowable amount.

Phil has limited mobility and her cognitive functions have declined further in recent years. The family are nearly out of money to pay for homecare, and their aunt has now gone into a nursing home. “We love her and want to look after her, but of course it can take its toll,” says Hughes.

Paula Maher is a registered nurse as well as the founder and owner of the Care at Home agency. She says looking after a loved one with dementia can be very challenging.

“Daycare centres and the Alzheimer’s Society provide vital resources, and many people employ homecare agencies so they can get out for a few hours and have a break. Family members should always take care of their own health first, because when their own needs are met, it’s easier to care for others. Ask for help and accept it when offered. Try to exercise: it promotes better sleep, reduces stress and increases energy levels.”

Getting home help shouldn’t be foisted on an older person, Maher advises. “We’re often approached by people who tell us that their parent won’t entertain the idea of care, and ask if we will come talk to them. Forcing it doesn’t work; they have to consent to us coming in.

Family members taking on care responsibilities need to know what they are doing: it can be dangerous, for instance, to try and lift an elderly person after a fall. “If you can’t pick someone off the floor, call an ambulance – they deal with thousands of such calls every year,” says Maher.

“Mobility is almost always an issue as people age and it does disimprove as dementia progresses. If modifications or adaptations are required in the home, a community occupational therapist will advise on these; grants are often available.”

Care agencies should always assess a client’s mobility and look at whether stair lifts, walking frames, safety bars or other aids are needed.

There are some other steps family members can take. “Dementia bracelets with a tracking device are useful if someone goes walkabout,” says Maher. “Don’t leave rugs or boxes on the floor that people can trip over. And don’t make too many changes in the home: familiarity is important for people with dementia.”

The Alzheimer Society of Ireland provides support courses aimed at supporting family members caring for a loved one with dementia. Alzheimer.ie

The practicalities of homecare

What is the HSE Home Support Service and what does it involve?

Home help hours, respite, nursing care, physiotherapy and occupational therapy are among the services in a support package. Appliances and physical devices may also be included. People who need more than five hours of help a week are eligible and up to maximum of 21 hours a week can be provided.

Homecare package hours through the HSE are not means-tested and are provided free of charge. Most people will be approved for just a handful of hours a week.

The HSE puts this out to tender and families must choose from a list of “approved suppliers”, which currently includes 32 agencies across nine regions, including Bluebell and Home Instead. An agency that does not win a tender may still have met HSE standards, although the Health Information and Quality Authority (Hiqa) has called for regulation in the sector.

Some families say the list of approved suppliers can mean elderly people losing the carer they are most familiar with. The Alzheimer’s Society of Ireland says the tendering process inhibits consumer choice; in a 2016 submission to the HSE it said there should be more client choice and that “the money [should] follow the person to the most appropriate care setting.”

How much does full-time homecare cost?

Do you qualify for tax relief?

If you are paying tax, there is tax relief on homecare at 40 per cent up to a maximum of €75,000 per year. The money can be claimed back using either the Revenue HK1 form for yourself or a relative in private homecare.

Who arrives at your door?

In most instances, a trained carer. Sometimes, a nurse. Don’t be afraid to check credentials with the agency. Best practice is that a nurse or team of nurses will consult with the family and do an assessment of the client to see if they are suitable for homecare.

When is a nursing home the best option?

Often, people with dementia will reach a stage where they need 24-hour care. Families will often want to provide that for their loved at home, but few will be in a position to become full-time carers themselves and, for the majority of people, hiring carers around the clock is prohibitively expensive. If a client can’t stand with the assistance of one carer, and a second is needed, a nursing home may be more suitable. As of now, the Fair Deal scheme is not available for homecare.

The disappearance of Trevor Deely, part 1
8