‘Regular running provides the same tonic as a glass of wine’ 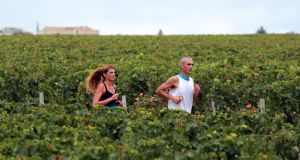 Sometimes it can be harder to get motivated in summer than in winter. Photograph: Nicolas Tucat/AFP/Getty Images

A: So far, so good. In the sense that our trip to visit my sister and family in Melbourne over Christmas and New Year involved a considerable amount of drink.

So much so that one of our seven-year-old twin sons saw fit to mention my love of a “glass of chard” in his holiday scrap book, and to notice “how much nicer mum is after she’s had one”.

Ouch. No mention of my love of long runs or how nice I am after one of those.

Clearly, I was drinking more than I was running.

In my defence, I’ve made up for it since getting home, including a penance-worthy long run immediately following the 24-hour plane journey with poleaxing jetlag; a run so gritty I feel it made up for at least 10 missed runs on hols. It was elemental in every respect, in all the best ways a run can be – the cold, the wind, the ever-present promise of a shower – and it instantly jolted me back into my London circadian rhythm.

Running is the cure for jetlag. Plus, it has inspired me to run almost every day since.

And the truth is, I’m not feeling the pain of January as much as I thought I would. It’s not nearly as cold as it was when we left and I’m having a bit of a gratitude moment about everything in my life, especially the darling twins (is this because they are back at school I wonder and I have an opportunity each day to miss them once more)? Almost certainly.

Nothing feels cold since running in Iceland back in November and the intense heat of those city runs in Melbourne and the extra work sand makes for your legs on a beach run – all way more punishing than anything my home runs in the woods can throw at me. Cold runs are easy in comparison with hot ones, mildish coldish drizzlyish ones are the easiest of the lot. And you feel so good after cold runs because you’ve made yourself warm as opposed to uncomfortably hot.

Plus, you’ve cheered yourself up against the negative pull of a grey rainy day rather than having torn yourself away from an ice cold lager and a sun lounger.

Perhaps it’s because I’ve had a holiday that I feel properly rested and invigorated and as a result am less inclined to drink. Although I’m not about to go dry Jan (for what remains of it) or Feb, 2018 has been far drier than I imagined it would be so far, because the more I run, the less I want to drink. I’d forgotten that regular running provides the very same tonic as a glass of wine.

I’ve been running most mornings after dropping the kids off at school, something I always used to do in our pre au pair days.

Since Annalisa came a year ago, I delegated the school runs to her so that I had longer at my desk to write; a move which was counterproductive. That run still needed to be done but as the day wore on I’d find a million other things to do instead. It was as if the lethargy and excuse-making gained power and strength over the course of the day. If I hadn’t gone for my run by midday, I knew I’d never muster the energy for it later on and I was lucky if that happened three times a week, which is how I came to be in this semi-running funk.

A lack lustre three runs a week is fine if you are doing other exercise and are generally super active, but if we take the NHS as our guide, it falls short of the recommended 30 minutes a day. And it just doesn’t feel like enough anymore, not enough to give me all those amazing side effects from more frequent running.

So, I’ve taken back the school runs and go with just my front door key and no cash or phone or distractions and weave a 40-minute jog into my journey home. It means that I’ve done my run by 9.30am and I’m in the most efficient, effective and positive frame of mind that I can be for the rest of the day.

I always knew it was great advice but it’s so hard sometimes to follow your own isn’t it?

As my mother always used to say back in the days when she thought I’d become a real doctor: “Physician, heal thyself.”

How to make a raspberry shortcake
Real news has value SUBSCRIBE