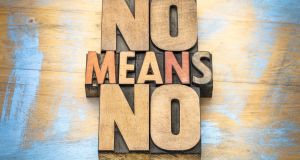 Transition Year students are to be given six two-hour lessons on sexual consent. This is in addition to the consent skills taught as part of Social Personal and Health Education (SPHE) and Relationship and Sexuality Education (RSE) at junior and senior cycles in post-primary schools.

The new programme will be provided by the Child and Family Agency, Tusla, and frontline sexual violence services. While it is important for children to learn consent and refusal skills in all areas of their lives, teaching about sexual consent is not easy.

Few adults or teenagers have a clear understanding of the meaning of consent in relation to sexual activity. A significant minority of the Irish population believe that consent is not always necessary. A recent poll found that more than one in five people aged 15 and over think engaging in sexual intercourse without consent is justified in some circumstances such as, “being drunk or using drugs”, “voluntarily going home with someone after a party or date”, or “wearing revealing, provocative or sexy clothing”. In fact, sexual consent is such a complex concept that it had to be clarified by the Irish Supreme Court in 2016.

A man appealed his 15-year sentence for rape to the Supreme Court because according to his defence lawyers, the judge in the original trial had not “properly elucidated” the “mental element of rape” that is, the state of mind of the man at the time.

The Supreme Court allowed two questions to be argued. “1 – Does the mental element of rape excuse a situation where on unreasonable and irrational grounds a man genuinely believes that a woman has consented to sexual intercourse, whereas in fact she has not so consented?” And, 2 – “Within the definition of rape, is there a requirement in law for a man to ascertain prior to sexual intercourse that the woman is a) capable of consenting to the sexual intercourse; and b) that as a matter of fact she does so consent?”

The Supreme Court clarified the meaning of consent in the context of the Rape Act 1981 (as amended) including withdrawal of consent during sex, even if previously given (this is rape if the man does not stop) and the fact that there can be no consent if the woman is not in a position to give it, for example, because of drink, drugs, or disability. “Consent is the active communication through words or physical gestures that the woman agrees with or actively seeks sexual intercourse. There should be communication from the woman through the senses that intercourse is to be allowed.”

The Supreme Court judgment also clarified the mental element of rape and the meaning of recklessness. The mental element is that “the man knew that the woman was not consenting to sexual intercourse or that he was reckless as to whether she did or did not consent”.

Recklessness in this context means that “the accused man was aware that there was a risk that the woman was not consenting but nonetheless proceeded”.

Recklessness in the context of rape, according to the judgement, is “advertent”, that is, a conscious act of a man who knew what he was doing.

If judges are not clear about sexual crimes, perpetrators will not be adequately punished

In relation to this particular appeal, the original trial judge was found to have mistakenly directed the jury “that they could come to the conclusion that the accused man believed that she might be consenting and in those circumstances the appropriate verdict is one of not guilty”.

The Supreme Court found that “might be consenting” is not a defence. The accused “must honestly believe that the woman was actually consenting, not merely that she might be”.

After 10 months deliberating, the seven judges delivered a 20-page unanimous judgement which dismissed the appeal and also clarified the directions that future rape trial judges must give to juries in relation to the mental element of rape.

If judges are not clear about sexual crimes, perpetrators will not be adequately punished for their crimes.

Will consent education prevent sexual violence? The short answer is unfortunately, no.

Many men will continue to behave recklessly towards women’s bodies, consent or no consent, because women’s rights do not matter.

Want to avoid the wonky first pancake? Here’s how ...
6