Five things I had forgotten about newborns 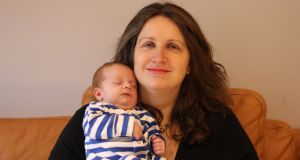 Calm before the storm: there is nothing as unignorable as a new baby cry

A copy of the Baby Whisperer, dog-eared from my first pregnancy three years ago, has gathered a thick-layer of dust on my bedside locker. Ignoring what the dust says about my skills as a home-maker, as a second time parent I counted on it all coming back to me and wondered how hard it could really be for a seasoned Mammy like me to care for a newborn. Two weeks in, it is coming back, in more than a whisper, with a ferocious bawl.

Here are five things I forgot about newborns:

1) They don’t know how to go to sleep: In his first week my new bundle would simply conk out after a feed and sleep blissfully for hours, six hours at a time overnight. My husband and I would give each other that “dare to dream” look “maybe we’ve won the baby jackpot?”

It’s week two. There’s a new tiny king in town. His name is Louis. For his inside naps he likes being rocked in a sling (but don’t dare sit down or stop). The king also likes his daily perambulation by the sea as he snuggles under a blanket in his mobile throne while the freezing winter wind whips the pram-pusher (me). And the top-of-the-range co-sleeper is not good enough for royalty who prefers to sleep on his own human pillow.

2) Newborns have absolutely no patience: There is nothing as unignorable as a new baby cry. It may only be 15 minutes since his last feed but he has decided he wants food. It doesn’t matter that Mammy is finally getting a shower (the hallmark of a successful day in any new mother’s book). No amount of shushing will work if he has to wait two minutes. And when you “finally” hold him, his sniffles and wobbly top lip and the saddest little whimper in the world, all make you feel that unavoidable emotion – mammy guilt!

3) It’s all about what goes in and what comes out. Never mind the latest outrageous tweet from Donald Trump – does my baby’s poop look like mustard seed yet? Yes the past fortnight has been focused on his tiny undeveloped digestive system. As a breastfeeding mother believing your child is getting fed almost requires faith. The only “proof” of this miracle is that there is something coming out the other end. Of course there is “an app for that” which records which side you feed on, for how long and the type of nappy your baby has – with an option to write descriptive notes . . . and as I write this I realise I’ve come a long way (down) from my pre-parenting days recording tasting notes on craft beer and fine wine.

4) You cannot move during the many many hours of breastfeeding. With a toddler in the house this means magnificent multi-tasking powers. Sitting on the couch feeding baby with one hand while my two year old cuddles me and I animatedly read The Gruffalo with the other, I feel like super-mammy. An Instagrammable, Facebookable moment.

Cue three minutes later: the book has dropped on the floor, as I try to reach it the newborn unlatches and bawls in frustration . . . “Get down off the chair,” I tell the by now bored toddler trying to assess if he is going to hurt himself, the new low standard of parental intervention. But late in the early hours, in a darkened room when all I can hear is the quiet suck of a happy, comforted baby, there is a magic that makes the chaos worthwhile

5) The joys of Baby TV. Netflix. Amazon Prime. RTÉ One on a Friday night . . . you’ve got nothing on my newborn and the joys of watching his little innocent face. Sometimes it’s the “milk coma channel” – that hedonistic happy high of an addict who has had their fill, followed by a “wind” crinkle above his lip. Unfortunately a bit like the Late Late, you can’t switch off just in case you miss something....so the Hungry Devil Network also comes on – his face turns red, his eyes scrunch up, his mouth opens and he screams . . . there is no off button on the remote for this scenario.

I’ve lived abroad for longer than in Ireland. Was I gone too long?
5

How normal is your sex drive?
10