Burnout: Our doctors have it, so what is the prescription?

Wellbeing of frontline staff ‘should be a top priority for hospital managers, policy makers and the health services’ 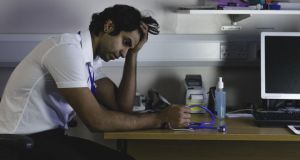 Toxic work environments not only affect physicians, but nursing staff and other healthcare professionals, with implications for public health

Recent evidence documents the growing problem of physician burnout in Ireland, affecting many doctors and thus, indirectly, their patients.

Dr Brian O’Dea – a GP in Kilmoganny, Co Kilkenny – told The Irish Times that “burnout is an experience of physical, emotional, and mental exhaustion, caused by long-term involvement in situations that are emotionally demanding. First described in 1974, burnout was later characterised as having three domains: emotional exhaustion, depersonalisation – cynicism and detachment from job and patients – and low personal accomplishment.”

Dr Mark Murphy, a GP and Chair of Communications at the Irish College of General Practitioners (ICGP), has experienced burnout. “During training,” he explained, “I realised that burnout was predominantly an external factor, imposed by inappropriate contractual and cultural obligations. I experienced horrific working conditions in some Irish hospitals, at times working over 100 hours per week, in permanent exhaustion.”

How prevalent is burnout?

Dr O’Dea and colleagues in the Discipline of General Practice at National University of Ireland, Galway, undertook the largest study of burnout prevalence in Irish GPs to date, published in 2016 in the Irish Journal of Medical Science. Of 683 GPs who responded to an online survey, 52.7 per cent reported high levels of emotional exhaustion, 31.6 per cent scored high on depersonalisation; and 16.3 per cent presented with low levels of personal accomplishment.

An anonymous survey of recently-qualified hospital doctors by Dr Enda Hannan and colleagues, published last year, showed that of 101 interns working in four hospitals over a two-year period, 55.4 per cent had high levels of emotional exhaustion; 41.6 per cent had a low sense of personal accomplishment; and 37 per cent met the criteria for psychological distress.

Dr Blánaid Hayes, Dean of the Faculty of Occupational Medicine at the Royal College of Physicians of Ireland, led the National Study of Wellbeing of Hospital Doctors in Ireland (April 2017). This revealed that of 1,749 hospital doctors surveyed, criteria for burnout were met by 38.4 per cent of basic specialist trainees; 38 per cent of higher specialist trainees; and 24 per cent of consultants. Further data from the study were published in 2017 in the journal BMJ Open. Commenting on their findings, Dr Hayes said: “One in six (17 per cent) experienced at least moderate symptoms of depression, with anxiety being slightly less evident (14 per cent). Over a third (35 per cent) experienced high levels of psychological distress, which is higher than comparable studies elsewhere.”

Dr Hayes emphasised that all measures of personal distress are significantly more prevalent in trainee doctors than in consultants: “It’s possible that the distress and poor workplace wellbeing experienced by these doctors have an impact on patient care, though this was not specifically measured in the study.”

Although doctor burnout in Ireland is high, there is an element of resilience among physicians determined to protect their patients’ interests. Thus, O’Dea and colleagues cited evidence to show that Irish GPs “are still able to derive satisfaction from their work and to feel efficacious, and that patients are less likely to receive substandard care”. Dr Murphy observes: “Juggling clinical, educational, research and advocacy roles is hard. But despite that, and although I have significant financial insecurity, I wouldn’t change my job.”

Why does doctor burnout occur, and how can it be addressed?

“As a doctor in training,” says Murphy, “both training and supervision were substandard. I was burned out, so I became very active with my union. But I was also fortunate to see, having worked in other healthcare systems, that training didn’t have to be coupled with burnout if the contract and culture were different. Often, when I’m burned out I look at my contract and the culture in which I work. Fix these and rest will follow.”

Dr O’Dea suggests some primary behavioural preventive measures: “These include improvements in dealing with stress, the use of relaxation techniques, learning to say ‘no’, cultivating hobbies, upholding social relationships and reducing false expectations. Secondary prevention involves early recognition of the disease or syndrome – ie stress management training in the case of burnout. Tertiary prevention deals with rehabilitation and preventing relapses of disease – such as counselling and occupational health services.”

O’Dea also stresses the importance of GPs being aware of the warning signs of burnout and taking appropriate protective action, citing useful resources regarding on the ICGP website.

In their BMJ Open report, Hayes and colleagues encourage an employer “to prioritise the welfare of its staff by addressing deep-rooted systemic problems contributing to the challenging work environment, such as low staff numbers, long work hours, work organisation and poor people management”.

Noting that Irish hospital doctors’ working hours exceed those of the European Working Time Directive (EWTD), they “encourage employers to continue working towards achieving compliance with EWTD while also monitoring the unintended consequences such as the break-up of teams and poor-quality handover with its implications for patient care.” The wellbeing of frontline staff, Hayes observes, “should be a top priority for hospital managers, policy makers and the health services, not least because it can impact on the quality and safety of patient care.”

Dr Hayes’ warning is also applicable to general practice, with Dr Murphy witnessing some of his close GP friends who consider the risks too great and rewards too little, “and they have exited the profession for an ‘easier’ clinical job, which pays more money. I understand their reasons, but the government must listen to GPs.”

Toxic work environments not only affect physicians, but nursing staff and other healthcare professionals, with implications for public health. It is clear that policy makers and employers should address this problem as a matter of urgency.