‘It never crossed my mind that I was an alcoholic’ 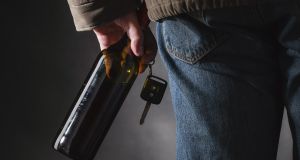 ‘I knew I had crossed a line when I was drinking in the morning, the afternoon, and the evening’

When Dubliner Declan got married at the age of 27 he thought things were going well.

“I used to drink a bottle of wine at home, not every day, but I’d look forward to it. It kind of happened more frequently as time progressed. A bottle of wine between us would turn into two, would sometimes turn into three. And as time went on, I realised that as we moved on to the second or third bottle, it was mostly me drinking it. I tried to make it look like it was shared, but it wasn’t.”

The months and years passed and Declan recalls tricky questions being asked. “I remember flashpoints, for example when my wife said: ‘Gosh, you’re drinking a lot aren’t you?’ I knew when she said that that she was watching and noticing. And because she was noticing, the next night I would have two bottles of wine on the go – one we were both drinking from and another only I was drinking from.”

The couple did not have children at that stage, but would go on to have a daughter.

Declan stuck with wine. “I never moved onto spirits, but I couldn’t get enough from beer,” he says. “I moved from nice wine to screw-top bottled wine. I would put the screw top back on the bottle and put it under a cushion, behind a curtain, anywhere. If my wife went to the toilet, I’d unscrew the cap and take another swig.”

He knew his wife was watching him, though, because she would say, “you’re not drinking again are you?”

Declan knew that his drinking was being noticed so he would go to the pub on his way home and have “one or two, three or four or five. Then, instead of arriving at the pub at 6pm, I’d arrive at 4pm and drink from then.” When he did get home he would have another glass of wine.

'It was only wine'

Not even having his daughter, who he loved, made Declan get home earlier. At the time, he felt his wife was confrontational. “I didn’t see that I had a problem. It was only wine,” he says.

He could always come up with a reason to stay in the pub, he says. It was Christmas, it was someone’s birthday. “It never crossed my mind that I was an alcoholic. That was someone on the street with a coat in a bag and no job. I had a job I had a car,” he says.

The car was to come in handy as something other than a manifestation of his apparent normality. “I started to drink in the car. If I was driving, I’d take a bottle from the glove box and have a drink.”

They were dangerous times, but Declan still considered himself a good father. “When I was there, I was a good dad, but I was quite happy to not be there so I could drink.”

The couple moved apart as their schedules moved apart. Declan would leave the house later to take their daughter to her crèche. “I was able to rationalise that my drinking was not affecting my daughter.” The couple stayed together, but had separate bedrooms. “We never went back, though, and separated a couple of years later.”

In 2009, Declan checked in to the Rutland centre, the largest private addiction rehabilitation centre in Ireland. Declan had known for a long time that all was not right. At night he would ring his friends and family, but would not remember what he had said.

His drinking had started like it does for many people. “In the park. Snakebites. At the time that was just what everybody did.” Everybody was not Declan, though.

Eventually, the drinking blew up in his face. “One day I remember going up to the crèche to collect my daughter on the way home and the guy who owned the crèche wouldn’t release her to me and then let me drive. I had a row with him I walked home with her that night.”

Declan’s chickens were coming home to roost. He says that it got to a point when he was “preferring to drink and drive than admit to my wife that I was drinking”.

Finally, after he was stopped by gardaí for drink-driving in the Phoenix Park, he started to face facts. “I knew I had crossed a line. I knew when I was drinking in the morning, then in the afternoon, then in the evening. When I was drunk-driving with my daughter in the car I knew it could not go on.

“I knew about the Rutland Centre, so I went to the centre with my wife.” They talked to a counsellor together, then Declan was on his own. The counsellor told him he was a chronic alcoholic, he says. “And I thought, ‘f**k you’.”

“I didn’t even consider it weird that it was 11am and I had drunk a bottle of wine on the way over. I said that I could stop drinking on my own, and I did, for a while, but then I started to drink. A lot.”

It took three and a half years and his marriage having broken down before he checked in to the Rutland Centre to get residential treatment for his alcoholism.

Declan went into the south-Dublin centre for five weeks. “I moved in there. No phone. No outside world.” For five weeks Declan had group therapy with people with other addictions – drink, drugs, gambling. He hasn’t drank alcohol since.

He finished treatment in 2009, eight years ago. He has been tempted, though, and the culture in Ireland has not helped, he says. “If you go out with people here and you don’t drink, it is a problem.”

After he finished treatment, Declan went back to his wife and daughter. He stayed until 2013 when he moved into his own house. He has faced tough times but even when his mother died last year he didn’t feel the need to drink. He has learned to cope with challenges in other ways. “Things can happen, but you prepare for the big things,” he says.

Declan has got his life back on track. “The best thing I ever did was to stop drinking. It gave me back a life. It gave my daughter back her dad; my wife a friend. It is just made things so much better for me. Just to be happy with who you are is absolutely fabulous.”

If you are concerned that you or someone you care about has a problem with alcohol, call the HSE Alcohol Helpline 1800 459 459. See also askaboutalcohol.ie & rutlandcentre.ie

These homes are the business – or should that be the other way round?
8