Daddy, dementia and me: ‘I have a recurring dream about murdering Daddy’

My ex-husband’s father died in his own bed; Daddy is incarcerated in a nursing home 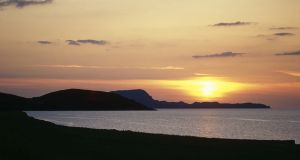 Austy Bob, surrounded by three generations of his family, was waked for two nights in the cottage he had shared with his wife for more than 60 years on Clare Island, Co Mayo. Photograph: Hoberman Collection/ Universal Images Group via Getty

I’m not sure if I should turn myself in or go to therapy because I’ve been having a recurring dream that I am about to murder Daddy.

In the dream I am standing over George with a pillow raised over my head while he snores like a geriatric tractor in his narrow nursing home bed here in the wild west.

As I am about to execute my patricidal deed, Daddy lets a long snort out of him, opens one eye, and nonchalantly asks: “What are you trying to do, Áine, kill me?”

He says: “Well, get on with it, then. Haven’t I always told you, I couldn’t give a shit about dying?”

“Well, okay, then, Áine. How about we get out of this joint, go for some chips and deep-fried onion rings and we can reassess the situation.”

It is really hard to believe that it is almost five years since Daddy was living independently in his Dublin apartment, albeit in pretty chaotic circumstances. Or, indeed, that so much time has elapsed since his expulsion for being a bold boy from the Dublin nursing home in which he resided briefly. Isn’t it ironic that it was his unrepentant independence that catapulted him across the country to his incarceration in a nursing home so remote from where he had lived his entire life?

Conversely, my ex-husband’s father died in his own bed, out on Clare Island, Co Mayo – in the cottage built by the Congested Districts Board in which he had lived almost his entire life.

Born in 1901, Austy Bob O’Malley had a long happy life: shoeing donkeys and horses in the little forge out in the yard; saving the hay with a scythe and cutting the turf with a sléan. He whistled the polkas and the reels for house dances, and tapped the top off his daily boiled egg like a sculptor creating a great masterpiece.

Once dusk had crept in over the horizon in the evenings, he would sit in his chair on the left side of the range – herself on the other side – and fill his pipe with the concentration of a forensic scientist.

This was his time for puffing plumes of smoke up over the Sacred Heart lamp while reading and snoozing. It could be Aleksandr Solzhenitsyn’s The Gulag Archipelago or John B Keane’s Letters of a Love-Hungry Farmer. He took the tales he read in every tome he devoured, whether fact or fiction, with a big pinch of salt peppered with a laugh which often involved the dislocation of his peaked cap from its perennial perch as he threw his head back and slapped his knees.

Times may have been tough, but it was communality that was the currency rather than consumerism

It wasn’t easy rearing nine children on a 16-acre farm in De Valera’s Ireland. The inevitability of emigration to Coventry or London, Chicago or Philadelphia was part of the cultural DNA. Despite the fact that such families were often flung all over the world because of economic privations, they usually maintained a web of closeness through visits home, letter-writing and, as has been well documented, sending back remittances that effectively kept the Irish economy afloat during the mid decades of the last century.

Times may have been tough, but it was communality that was the currency rather than consumerism. The corporatisation of our culture was a monster yet to be born where, along with just about everything else, old age would become a commodity from which vast profits could be made; for which the State must increasingly stretch its budget.

Seven days after his 91st birthday, on November 9th, 1992, Austy Bob faded out of this world and, surrounded by three generations of his family, was waked for two nights in “the room above”, in the bed he had shared with his wife for more than 60 years. His widow and youngest son helped “put him over-board” – the expression still used on the island for laying out a corpse.

I feel privileged that I was part of the intimacy and warmth, the laughter and the tears, of that whole ritual.

What a comforting way to glide from this world to the next.

Isn’t it no wonder I’m dreaming about murdering Daddy?

SERIES: Daddy, dementia and me
Part 1: I couldn’t see him so confused
Part 2: How can I tell him his son is dead?
Part 3: The stand-off about a car
Part 4: Daddy talks to me about Mammy
Part 5: He left the wedding for a cigarette
Part 6: If granny had drowned that day
Part 7: A drummer boy on your tree?
Part 8: Preoccupied with death
Part 9: More than just his haircut
Part 10: He called them ‘tight gobsh***s’
Part 11: A recurring dream about murdering Daddy